You are here :Home China Welcome To Xinyang,The Chinese Ghost City That’s Not Even Built Yet

A massive exhibition center stood vacant next to an equally desolate museum and theater, forests of high-rises reached up into the sky but sheltered nobody, and a sea of uninhabited buildings stretched out in all directions as far as I could see. I was in Xinyang’s new district, in the south of China’s Henan province, a place that has been infamously branded a ghost city — a newly developed urban area with everything but people. I entered this district early on a smoggy, grey morning and found myself enveloped within a cityscape that had a severe deficiency of inhabitants and an excess of abandon buildings, but there was a good reason for this: the place wasn’t even built yet.

Watch the video from my visit to Xinyang’s new district

In 2010 a series of satellite images went viral on the internet which showcased this new district of Xinyang as being uninhabited. Since then, the international media has been using this place as an example of China’s housing bubble and ghost city phenomenon. But from the moment I arrived it was evident that this new district was in no way deserted, desolate, or forgotten about; it was clear that the half finished architectural skeletons that were reaching for the sky were not stiff with rigamortis; no, this place was an ensemble of construction.

I was in the middle of a landscape that has only rarely arisen in the timeline of history: it was the landscape of an entire new city being built all at once. The founding and building of new cities is something that earmarks the accession of various civilizations all the way back into antiquity, and this is no different in China during this era. But China has perhaps taken this to a new extreme, and has spread more cityscapes over more ground area faster than any other civilization — ever. It is estimated that China has built over 500 new cities since 1978, and, knocking off 10 to 20 each year, plans to build over a hundred more by 2020. Xinyang’s new district is one of these new urban areas, and, as of now, it is chock full of construction workers giving it life in a singular blast of development.

Everywhere around me were the frames of high-rises, and men in yellow hard hats and blue overalls putting up, piece by piece, what will soon come together to be a new urban area. The buzz of creation was everywhere and a chorus of jackhammers, rivet guns, and cement mixers made up the soundtrack of this place. The streets were full of cars, there were small businesses open, and people were everywhere. I wandered through this new city as it was being built up around me. As far as I could see down the district’s two main drags were mountains of green mesh and scaffolding which sprouted cranes like trees. There was nothing ghost-like about this place. To the contrary, it was in a fury of activity. Cars, construction vehicles, and ebikes clogged the streets, VIPs drove around in black SUVs with tinted windows surveying their creation in progress, workers paraded around in every direction, police officers were languidly posted at intersections, and residents — yes, people live around here — were going about their days. This may be a broad statement, but ghost cities generally don’t have traffic. Though I wasn’t in a ghost city at all, I was in a new city that was still in the process of being built.

As of now, this district is made up of a massive, well groomed central park that is surrounded by large exhibition and public entertainment centers, a gigantic monolith of a government building, a massive hotel, hundreds of high rises in various stages of completion, and massive lots of dirt that have been cleared out, leveled, and prepped to sprout yet more housing complexes. Apart from the government building, the Zhongle hotel, and a splattering of small businesses, most of the completed buildings here were vacant, but they seemed more in waiting for the day when the city flips on its lights than forgotten in the dark. 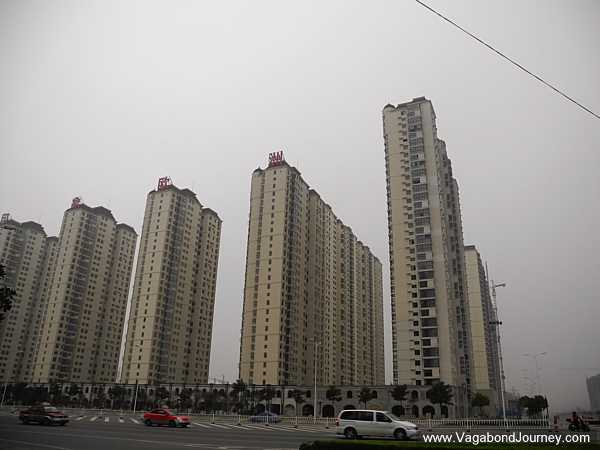 I hung out in the central park with a group of old men who were spinning large, stone tops with leather whips and old ladies doing tai-chi, before heading over to a colossal housing development that had been highlighted in previous media as being uninhabited. I was on the hunt for abandoned, desolate, post-apocalyptic scenes, and all the traffic and activity that I’d so far found in this city was putting a bit of a damper on my mission. I arrived at the large manmade lake that can be easily located on the “ghost city” satellite images, and looked out at a truly remarkable scene suspended half way between inception and completion.

The housing development was constructed by the Zhengle Investment Group, who were pretty much building the entire city, and it was colossal. It took up the entirety of a large city block, and consisted of multiple “neighborhoods” positioned around the lake.  There was a community of villas on the west side and dozens and dozens of high rises of various shapes and sizes clumped together to the east. This conglomeration was to be a city in and of itself, but it was not yet inhabited. 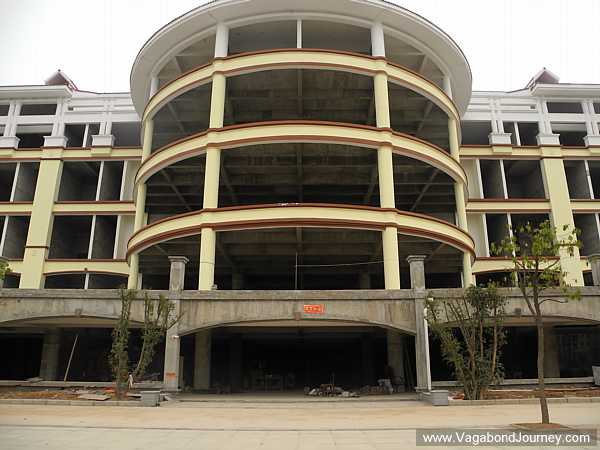 Some of the villas had small work crews stuffing them with innards — walls, decor, electricity, plumbing, fixtures, windows — while most of the apartments sat as empty, rectangular holes. Like peering through a bare rib cage you could see clear through most of the high rises, as each housing unit was just an empty orifices gaping in the side of the skeletal structure waiting to be finished off. But, none the less, there were still people here. They were speculators or future residents who had purchased property in this complex. They were strolling around, watching the project taking shape or were inside their purchases doing interior decorating, prepping them for future sale or habitation. I met an old couple moseying down by the lake who told me they’d just bought a property here, they were smiling and seemed to be enjoying how the development was taking shape. I chatted with a young, recently married guy who seemed pleased that he landed  an apartment for 3,000 RMB per square meter. 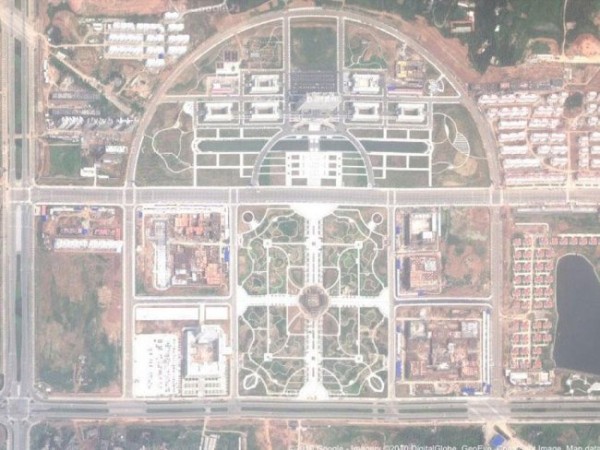 I wondered what the deal was about buying a place here, so I made way for the public showroom. I walked through the doors and found two women and a guy standing at attention behind a counter. They looked nervous as I approached, but once I let them know that I was just inquiring about buying an apartment they launched into their routine. After a brief giggling session between the women as to who would help the laowai, one of them led me around the showroom and directed my attention to the little scale models of the apartments that were available in the complex. But when I inquired about the price I was told that I would need to speak with a realty dealer, that their job was just to show me the little models and not sell the actual properties. Fair enough. 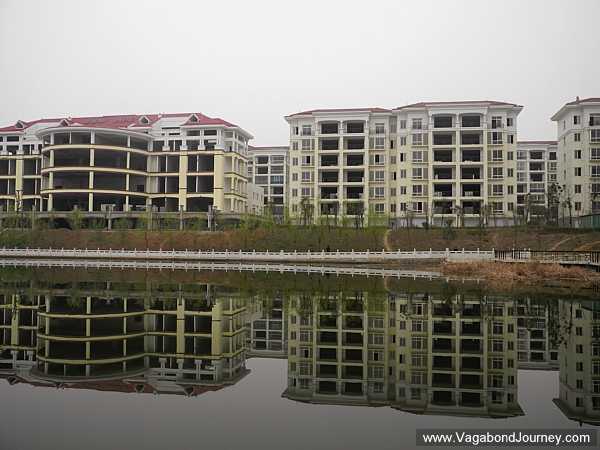 This is one of the main reasons why many housing developments throughout China stand virtually uninhabited long after they are built. The properties are often bought up by real estate speculators looking to spin a profit and families looking to invest in the housing market almost as soon as they are available for sale from the developers. So millions of apartments are uninhabited throughout China not because of a slow economy or a lack of interest in the properties, but for the exact opposite reason: many people in this country are investing in real estate they have no intention of living in. So genuine prospective residents are often pushed out to the periphery of the housing market by these investors who artificially inflate the cost of new housing. If China has what appears to be ghost cities it’s more a result of the economy doing well than a portent that the country has become financially stagnant. 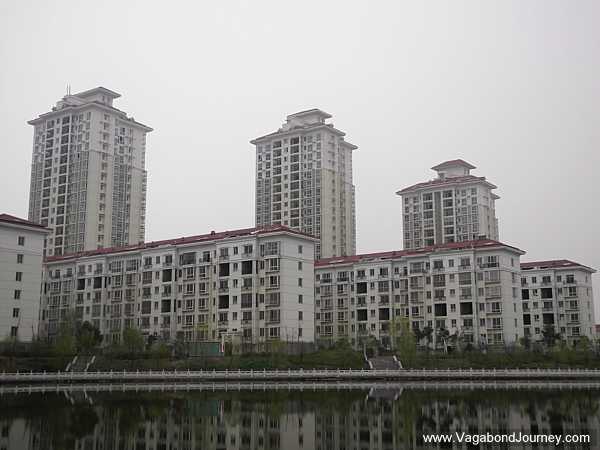 “How many people live here now?” I asked one of the girls in the showroom. I noticed that there are some apartments that appear finished among the masses of empty cavities — I saw laundry in some windows, as well as cars parked at the foot of some of the buildings.

“Nobody lives here yet,” she replied, and then added, “We are not open yet.”

“When will you be open?”

“If I bought an apartment when could I move in?” I asked

Far from being a forgotten about ghost city, people were not even being allowed to move in here yet. 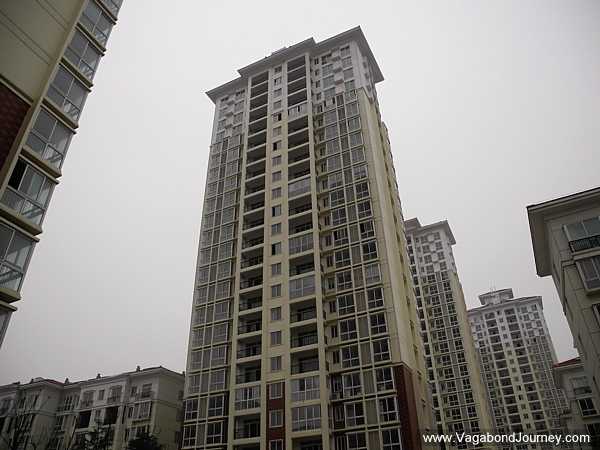 I then sat down with the three workers in the showroom, and they served me some warm water. They didn’t seem to have much else to do, so I asked them the hallmark question of my ghost city investigation:

“Did you know that the American media says that nobody lives here?”

“I live here too!” piped up another.

The other worker just laughed at my preposterous question.

“Very many people live here,” one of the girls explained. She was on the defensive — imagine if some Chinese guy came into your city and told you that people in China think it’s a ghost town. 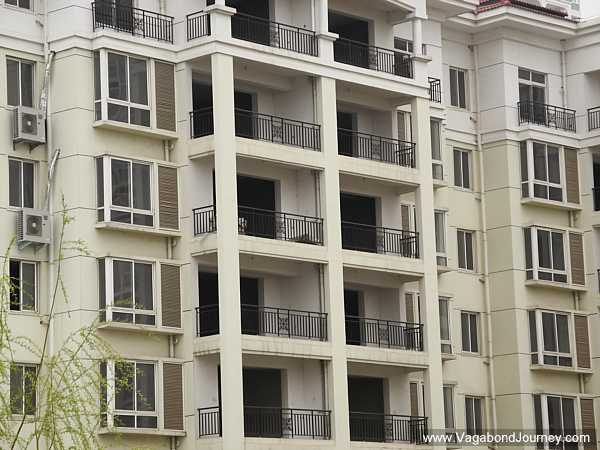 There were less grandiose apartment complexes scattered around the periphery of the massive construction areas that were inhabited. The very suggestion that this place is deserted was ridiculous to the people who live and work there.

Though Xinyang’s new district is not a ghost city yet, there is no guarantee that it won’t be once the dust settles, the scaffolding is taken down, and the construction workers move on to the next boom town. There is no telling if this place is being built as a fanciful dream of over-eager and delusion government officials, if it is the result of corruption, or if there is truly a demand for Xinyang to double its size as China continues to rampantly urbanize.

So why has this place been dubbed a ghost city when most of its infrastructure, buildings, and businesses haven’t even had the chance to face the light of day, let alone fail?

The satellite images of this district that were fed to various major media networks in 2010 were done so by a Hong Kong financial research firm called Forensic Asia. From what I can infer, they were the ones who originally stamped the “ghost city” label upon the Xinyang new area, but this seems to have been done with little more research than consulting Google maps — which are only updated every one to three years at best. But many websites published those images with captions like, “The orange area to the north-east of the Xinyang has yet to be occupied,” and “No cars in the city except for approximately 100 clustered around the government headquarters,” and “See that orange area to the north-east of the Xinyang? It’s a giant new development, which doesn’t yet have a name,” and “Take a closer look: See anyone?”

And just like that, a ghost city was born.

Although dozens of major publications have proclaimed the Xinyang development to be a ghost city, it seems as if no foreign journalist has yet published an account of actually visiting the place. Once this district is seen from the ground it is immediately clear that the “ghost city” claims were not only premature, but also completely incorrect. The dust has not even settled here and the construction crews have not even cleared out. Calling this place a ghost city is like calling a store bankrupt before it even opens its doors. Xinyang’s new district is not a ghost city, it is a massive construction site.

Read more from our series on China’s ghost cities. 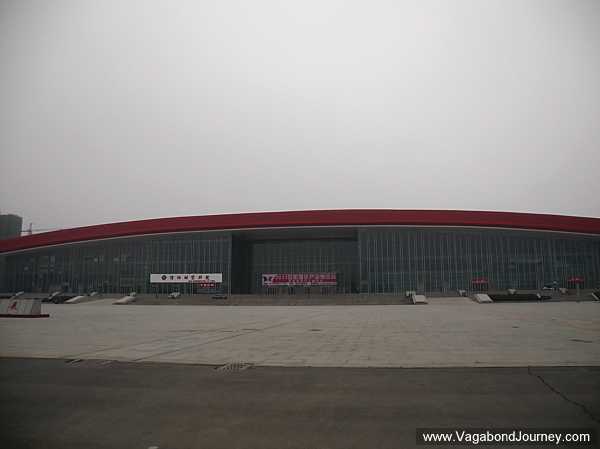 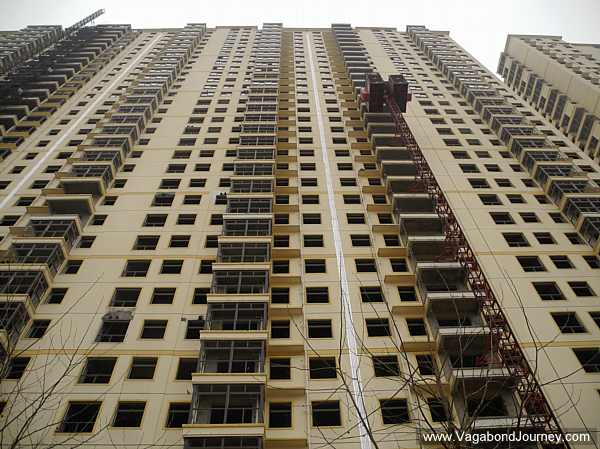 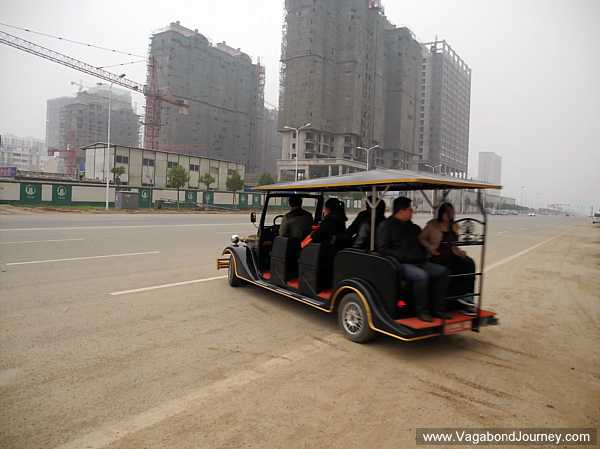 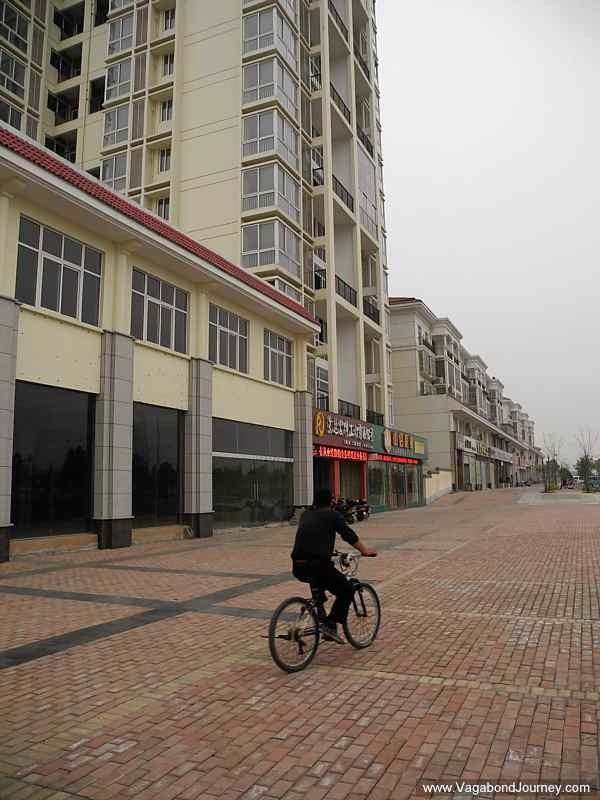 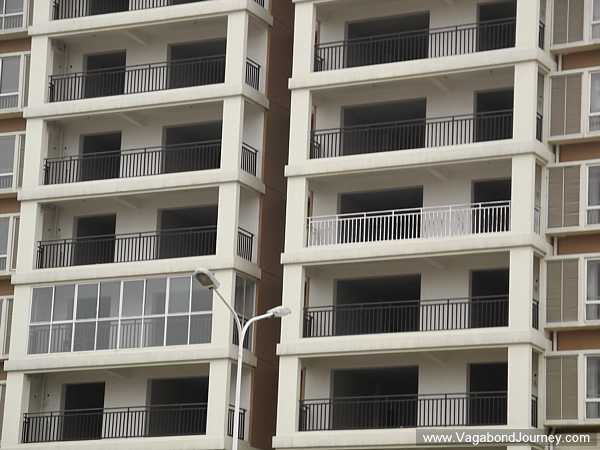 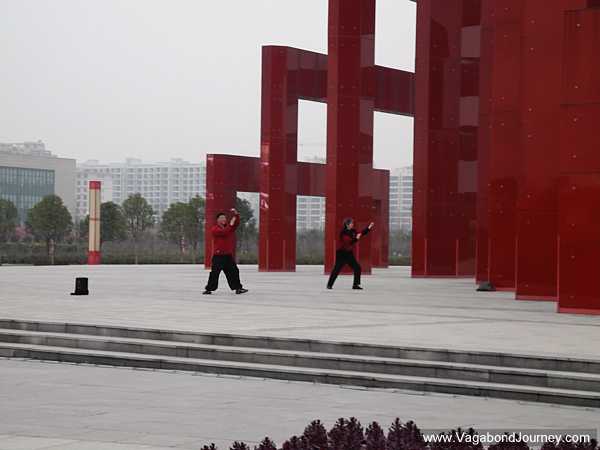 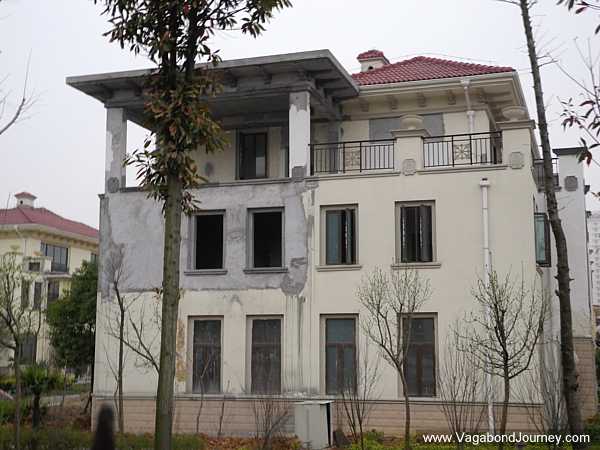 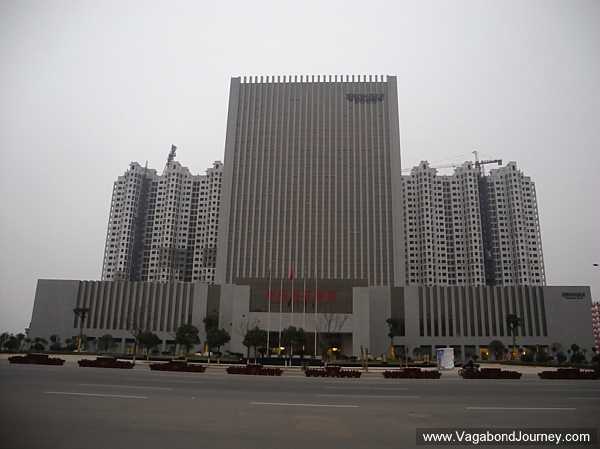 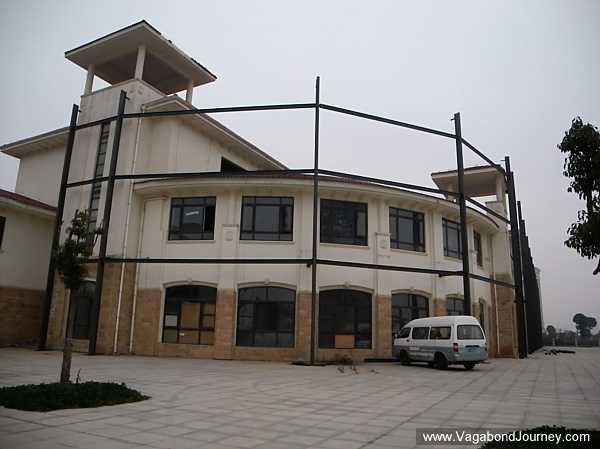 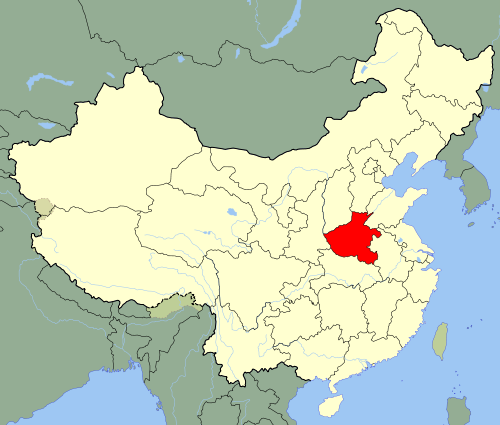 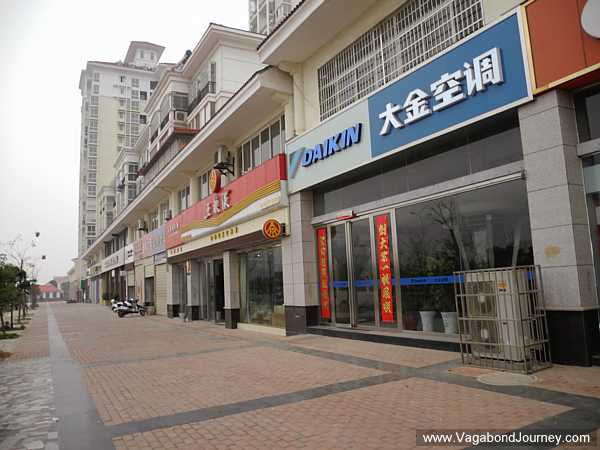 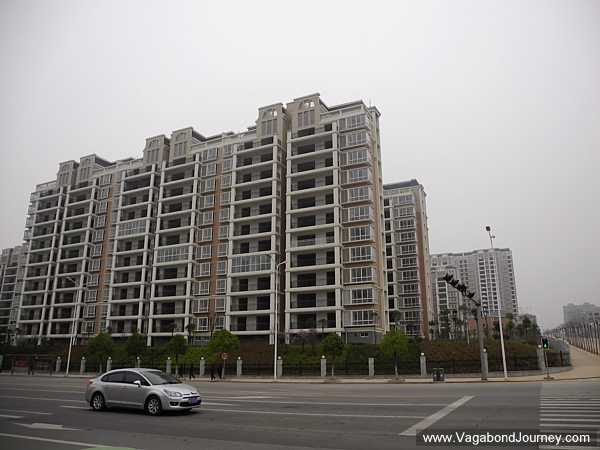 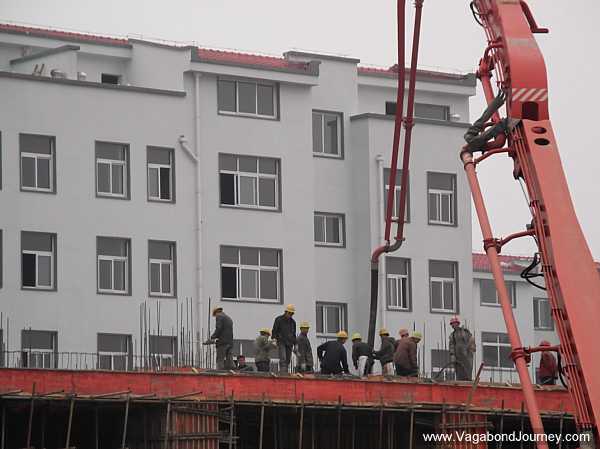 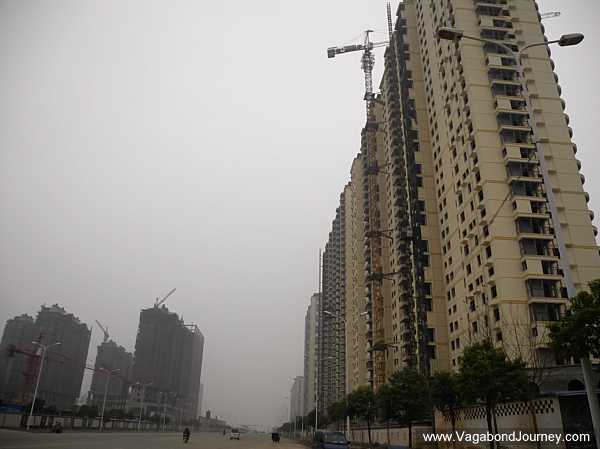 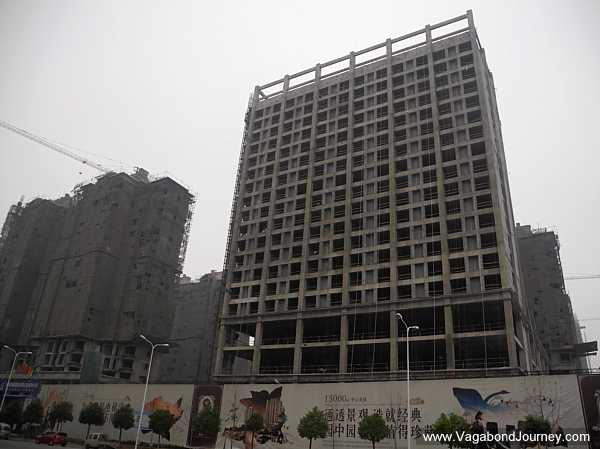 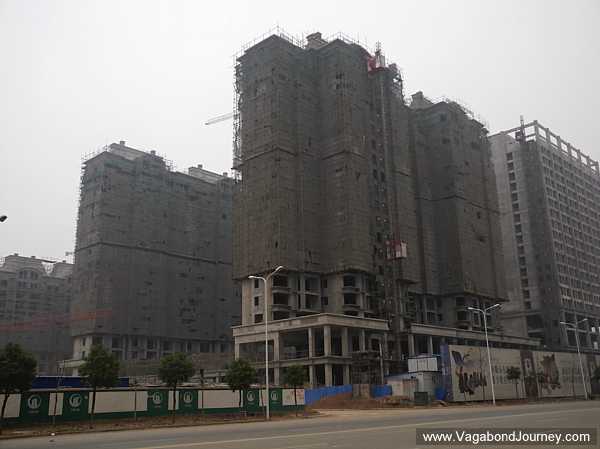 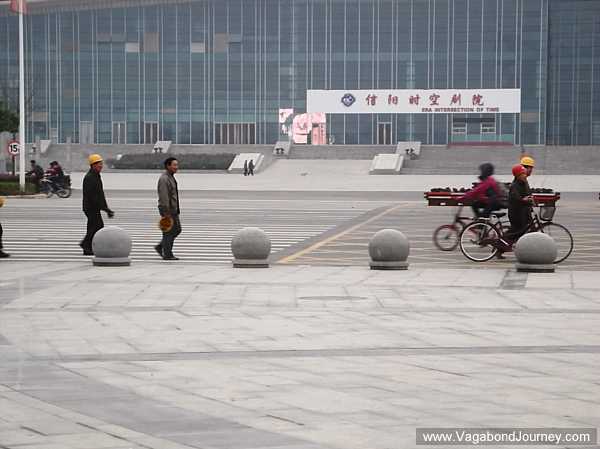 « Not Deserted! This Chinese Ghost City Is Peopled
Absurd Racism Claim And Attacks On Chinese Culture »