You are here :Home Articles Tibetan Refugees in India – In a Land of No Return

BYLAKUPPE, India- In 1959, on the heels of their beloved Dalai Lama, tens of thousands of Tibetans abandoned their Chinese occupied homeland and sought refuge in India. Recognizing the atrocious nature of the Chinese invasion and subsequent colonization, along with the uncomfortable political situation in which they were placed, the Indian government absorbed the mass migration with open arms.

By 1960, it became readily apparent that the Tibetan refugees would be residing in India for an extended period of time, and the construction of permanent facilities to accommodate them became an issue of great pertinence. To address this need, the South Indian state of Karnataka offered up three thousand acres of jungle-land for the construction of a massive refugee camp near Bylakuppe. Thousands of Tibetans were soon sent to this location; where they carved a niche for themselves out of the wild jungle and, essentially, created a “Little Tibet” upon the humid flatlands of Southern India. Now, forty-six years later, the camp is home to 14,000 Tibetans spanning three generations, towering sky-high monasteries, flourishing agricultural fields, and an entire range of well-established public facilities. All of this provides one with the impression that the Tibetans have created a permanent base for themselves in India; but, as any refugee will readily proclaim, their stay is thought of in purely provisional terms. The exiled Tibetans have not yet given up hope that their homeland will be liberated and that, within their lifetimes, they will be able to return. Tibet is on the minds and lips of the entire community, and, although most of the refugees have never laid eyes on their homeland’s mountainous terrain, it still lives on within their hearts. 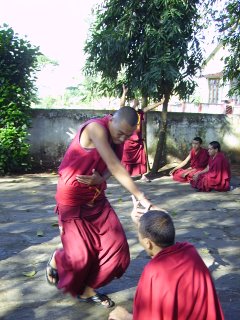 The Bylakuppe Tibetan refugee camp was created in the south western portion of Karnataka state, which is located in the far south of peninsular India- over two thousand kilometers from Tibet. This was the first and largest of the intentional Tibetan settlements in India, and was created in response to the need to consolidate the masses of Tibetans who were fleeing the Chinese occupation of their homeland. Initially, the Tibetans formed haphazard habitations around the Indian border states of Arunachal Pradesh, Sikkim, Assam, and Himalachal Pradesh; where they found only modest amounts of governmental support, and lived in loosely assembled camps. Many Tibetan refugees died as a result of living in these highly crowded and unsanitary conditions. This unsteady state of affairs provoked the Indian government to construct a very large settlement in the far south of the country for the exiles to reside in.

When I first entered Bylakuppe, my impressions were of a mixed community of ethnic Tibetans and native Indian agriculturalist living side by side in mutual symmetry. On the ride into town I saw Tibetans in the usual garb of the contemporary Indian commoner- off colored cotton slacks and button down shirts- riding around on motor scooters and talking shop with Indians in the dust brown streets. Bright purple robed monks sped around in Indian driven, exhaust coughing rickshaws. The shops that lined Main Street were a smorgasbord of Tibet and India: Tibetan craft markets stood eave to eave with Indian spare-part outlets. In fact, except for their obvious physiological features, the Tibetans seemed to be nearly indistinguishable from the Indians. But, as I learned more about the history of the camp, these melting-pot impressions quickly faded. 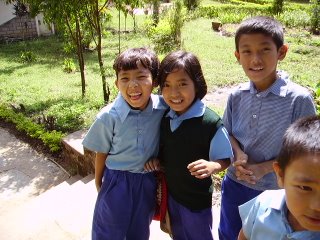 The official reason for the Indian Government’s excessive altruism was that they wanted to allow the decimated Tibetan population the space and gravity needed to preserve their culture. Many Tibetans in the Bylakuppe camp mimicked the above reasoning, and said that they were very grateful for India’s understanding and assistance. But I also have the impression that there was a driving pressure on the Indian government to administer a degree of control over the unsettled Tibetans, and also to move a potentially militaristic population, with a justified vendetta against the Chinese, as far away from the borderlands as possible. The jungles of Southern India were an appropriate answer to all scenarios.

The Indian government initially provided the Tibetan refugees with three thousand acres of dense jungle and farm land for the creation of a large scale settlement. The initial group to arrive in this area numbered five hundred and, with the assistance of the Indian government and international NGOs, they began clearing the jungle and constructing an infrastructure by hand. One of the camp’s original inhabitants, Tsering Pallden, told me that they did this by dividing themselves evenly into two groups: one cleared the forest while the other constructed roads. All of this work was done in the most primitive manner conceivable- using only simple hand tools and brute strength- and took a great toll on the refugees. Many of them died as a result of this toil; as the dire hardships and harsh jungle climate was more than what many of the Tibetan highlanders could take. But they persevered, and constructed one camp after another to accommodate the continuous stream of new settlers. Now, the Bylakuppe settlement has fourteen camps, four lavish monasteries, multiple schools, and a population of 14,000 Tibetans. “We made a nest in this jungle, and now it is no longer a jungle,” proclaimed the director of the camp’s refugee school, Mrs. Choni S. Tsering, who emigrated to the camp when she was only eight years old. 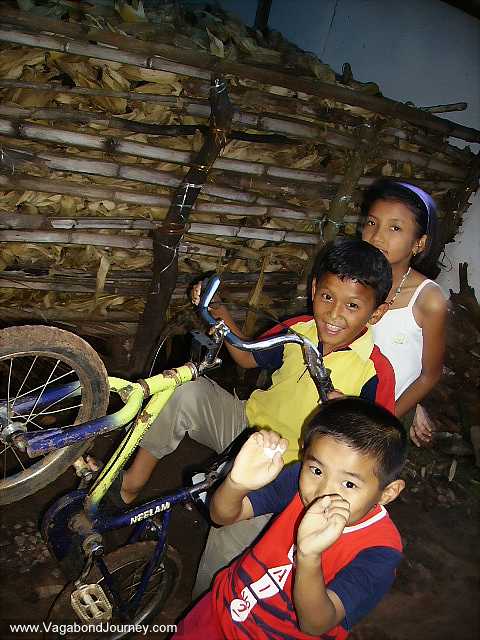 After the jungles were cleared, the problem of cultivating the land became another great challenge to the Tibetan exiles. In Tibet, most of the refugees were pastoral nomads who, for the most part, knew neither grain nor how to sow it. Therefore, as Mrs. Tsering, put it, “We not only had to learn, but we also had to survive.” This theme seems to have been taken to heart, as the Tibetans slowly learned cultivation methods from the small minority who had previously practiced agriculture in Tibet, as well as from the assistance provided by foreign NGOs. The hardworking Tibetans soon molded their fields into fertile oases, which have become so profitable that laborers from the local Indian community are now regularly employed to cultivate them.

The fact that the Tibetan refugees were provided with such excessive amenities from the Indian government and international community was greatly resented by the native populous of Bylakuppe; who themselves were highly impoverished and could have benefitted from outside assistance. Essentially, the hand-outs that were given to the fleeing Tibetans allowed them to achieve a much higher living standard within a single generation than the Indian population had ever known in millennia of agricultural toil. This seeming unfairness on the part of the Indian government was the impetus behind violent conflicts between the local Indians and Tibetans during the initial stages of the settlement. But I was told by a Tibetan community leader that this strife has since simmered down and that the refugees and Indians now live in harmony: “We go to their celebrations and they come to ours,” he said. But I still harbor doubts as to how harmonious this apparent symbiosis between the well-off foreigners and the impoverished locals could possibly be. 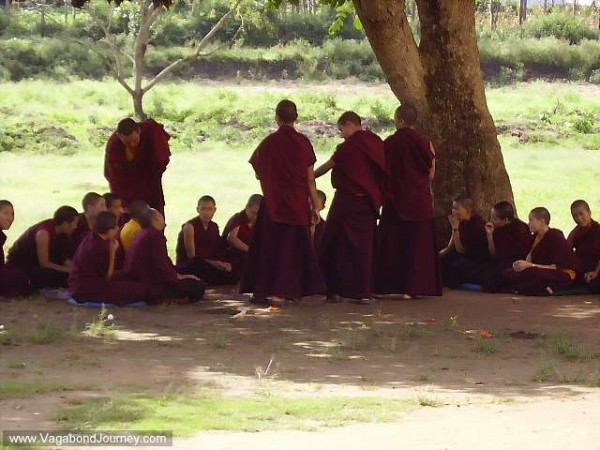 In spite of all the turmoil resulting from the Tibetan’s resettlement, the educational facilities of the Bylakuppe camp stand as a beacon of what can be possible with hard work, cultural dedication, and the necessary steadfastness to obtain international aid. I visited the S.O.S. (Save Our Souls) school, which serves as a boarding house and educational facility for orphaned and refugee Tibetan children, and was very surprised at what I found. The school was well supplied (they even had a computer room that most secondary schools in the United States would be envious of), everything was neatly organized, and the children were well groomed, healthy, and seemed to be very happy. 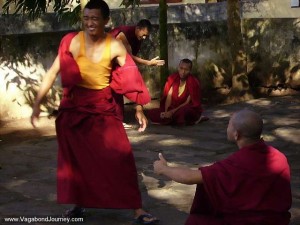 I was told by Mrs. Tsering that only around 55% of the students at the S.O.S. school still have parents, and they all either reside in Tibet or are scattered throughout various localities in India. The children were sent to this school so that they would have a better opportunity in life and I was told that, for many of them, it is very doubtful if they will ever see their parents again. The compassionate faculty of the S.O.S. community serves as the student’s family, role-models, and mentors. This school is the student’s home village, and from the looks on their healthy smiling faces, it seemed to adequately served their needs.

The educational instruction at the S.O.S. refugee school was modeled off of the traditional Tibetan system, and songs, art, and activities are the main teaching methods. Tibetan culture is also thoroughly emphasized in the schooling system, and a great portion of the curriculum is based around Tibet. “They have a lot to learn about the mother land,” said the school director Mrs. Choni S. Tsering, “and it is our job to teach them.” I was received as guest to observe a class that was in session, and found a large group of refugee kindergartners sitting in a circle belting out an incredibly beautiful traditional Tibetan folk song. I asked the school teacher what the words to the song were, and she translated that song as, “The Dalai Lama is flying on a plane, now he is riding in a car. . . .” It was not the lyrics that I expected, but a smile crept over my face none the less.

As I walked down the roads of the Bylakuppe settlement and through the little paths of its villages, I was given the impression that these Tibetan refugees have formed a little utopia in the dawn of their dislocation. But no matter how idyllic this scene seemed, I was told that they would gladly leave it all to rot for the chance to reclaim their homeland. As Mrs. Tsering explained, “Anybody would love to be in their own country; anybody would love to be with their own mother.” This sentiment seemed to have an all pervasive presence over the entire camp; and all bearings seemed to be pointed north in preparation for the great return migration. This has always been the plan, and its reverberations have been carried through three generations. When I was sitting in the home of Mr. Tsering Pallden, who was one of the original members of the settlement, he told me with sad old eyes that all he wanted to do was to return to Tibet before he died. But he can not. None of the refugees can. Tibet has been saturated by Chinese emigrants, Tibetans are now a minority in their own country. The once forbidden holy city of Lhasa is now a tourist carnival, and the Chinese still rule with violent supremacy.

I also must question the degree of the refugee’s sentiments towards Tibet. They seem to live a life in India that is far more comfortable, luxurious, and prominent than the people of Tibet have ever lived: there is a constant stream of foreign aid coming in, most families have at least one member living in, and sending money from, western countries, and the initial gift of land by the Indian government provided them with an economic leg-up over the rest of the region. The refugees are very well off in India, but this does not seem to have any effect on their emotional attachment to the ideal of their motherland. “We are always dreaming of our return to Tibet,” added Mrs. Tsering. But, for the refugees, Tibet is now only a distant dream.

More photos from the Bylakuppe Tibetan refugee camp in India can be found at:

« In Search of a Tattoo in the New Japan
Nazis, Communism, and Wine in Moravia »