You are here :Home Art and Music In Search of a Tattoo in the New Japan

Tattoo in the New Japan

After hearing that Tsukasa was dying, I went back to his studio to find out how everything stood. It was true: the master was in no condition to tattoo. The apprentice seemed to coldly shrugged this news off though, as if it was to be expected. He also told me that he, by himself, did not feel comfortable with his skills to create a traditional style tattoo that would stretch from the top of my shoulders to the bottom of my buttocks. I was disappointed to say the least, but was not presented with much recourse. So we talked a little more about tattooing and I took some photographs of him and the studio. We then smiled, bowed, and said farewell.

Now Rosemary, my contact into the tattoo world of Kyoto, also mentioned another tattoo artist that she knew in town: and Madoka was her name. She was an artist at Cat Claw studio- a modern-esque Japanese tattoo parlor chock full of western influence but, in their manner of approach, was still very traditional. I looked up their address online, which was in the fashionable district of downtown Kyoto, and again rode off from my home in Ginka-ku to pursue a Japanese tattoo. 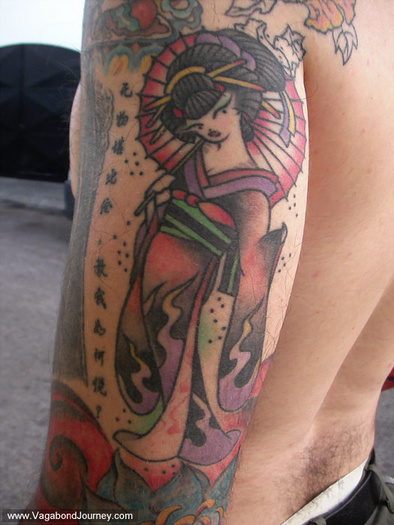 It was around a forty minute bike ride through the congested streets and alleyways of Kyoto to the studio. Forty minutes of constantly dodging something or other: clueless strollers, clueless children, and clueless drivers all seemed to unintentionally impede upon my path. But after nearly running down the masses of Kyoto and occasionally losing my way in the city’s winding alleys, I finally arrived at the studio.

There was a fold out sign on the street that said Cat Claw Tattoo on it with an arrow which pointed in towards an empty stairwell. I intentionally rode by it once to give myself a little time to think through how I would present myself in this new circumstance (every social interaction in Japan demands a particular set of etiquette). But I soon realized that preparation would not get ma anywhere, as I had no idea how this type of studio would receive me, or the rules of etiquette which would apply. I did know, though, that this studio would be less formal than Tsukasa’s traditional studio that I previously visited. Cat Claw is a street-front studio in which potential clients can walk in at leisure with no formal introduction. The tattooing that is practiced in these parlors are also very different than the traditional studios in that, rather than approaching the entire body as one contiguous canvas to tattoo, they tend to focus on each tattoo as an independently standing “piece,” as in western tattooing. Traditional Japanese tattoo afficionados ruefully refer to these pieces as “point” tattoos.

I then gathered up a little boldness and ran up the stairs that lead to the studio. I walked in through the door without knocking and clumsily removed my large boots; an act that took a few minutes. Once accomplished, I looked up to see one of the most beautiful humans that I have every gazed upon gazing back at me with a puzzled look on her face. It was Madoka; Rosemary had previously warned me that she was the most beautiful woman in the world, and as I stood there in that moment, I was sure that she was. She was tall and lean like a stick, with arms that jetted out from her sides like the branches of a tree. She was completely covered in bright, colorful tattoos. Her head was amazingly big and round, and just kind of hovered over her body. Her presence rendered me breathless and I could scarcely find any words, let alone Japanese ones to introduce myself. I finally managed to mutter an, “Are you Madoka?,” in jittery Japanese. She giggled at my presumptuous us of her native tongue and told me that she was Madoka, in English.

I then walked up to the counter that she was standing behind and asked if it would be possible for me to discuss a tattoo with her. She said that it was, but I would have to wait until she finished a tattoo. I was actually grateful for this delay, as it would give me a little time to sit back and take bearings on my surroundings. So I sat down in a chair that was placed in the far corner of the studio and browsed through an adjacent bookshelf of tattoo portfolios.

As I sat in there I was struck by how clean and precise the studio was; everything seemed to have a place and nothing appeared to be blemished: the hardwood floor, the glass display cases, the bookshelf of tattoo portfolios, the working stations, even the artists themselves were spotlessly clean and well ordered. The workers bustled quickly about with purpose spouting from their every step. I was solely a backdrop to this scene, albeit one that occasioned a few wayward glances from the staff and their regular clients.
As I waited, I flipped through the portfolio of some of the tattoos that Madoka had created. She definitely had her own touch and style: bold, flowing figures, bright colors, and an overriding sense of playfulness. She was well-known around Kyoto for her tattoos of geisha dancers. I first noticed one on the forearm of an apprentice at Tsukasa’s traditional studio. The geisha in this tattoo wore a blue kimono and was holding a colorful umbrella; its elegance was beyond anything that I imagined possible from the tattooing medium. From this point on, I knew that I wanted one of Madoka’s dancing geishas tattooed upon me.

Madoka soon finished the tattoo and called for me to come up to meet her at the counter. I quickly did so. I then explained the design that I wanted her to tattoo on me and we set up a date to do it. This was all very simple and straight forward, entirely different from the excessively intense interviews required by traditional Horimono masters. The entire consultation was completed within a few minutes, and I was scheduled to be tattooed at our next meeting.

I eagerly awaited the day of my tattoo appointment, and when it finally came, I again hurried across Kyoto on my archaic Japanese bicycle. When I arrived at the studio she greeted me with a warm smile and we made small talk of what we did since the last time we met. She then showed me the drawing that would be put into my skin. It was amazing; the lines in the geisha flowed smoothly and seemed as if it would “dance” well within the contour of my arm. I told her that I loved it, and she seemed pleased.

I then waited for Madoka to set up the tattooing equipment and her work station. After a while of waiting I was told to remove my shirt and shoes and to enter into the working area of the studio, which was towards the back. I did as I was told, and Madoka then measured her drawing up against my arm and decided upon the best placement for it. She then made a stencil on transfer paper and pushed it real hard to my skin. This is a practice that entered into Japanese tattooing from the west. The traditional horimono master does not use stencils, opting instead to draw the design directly upon the skin. She then peeled off the transfer paper and the stencil for the tattoo was left upon my arm. It seemed to be placed perfectly and it did actually flow with the tidings of my body. I admired it in a large mirror and told her that it looked alright to me. She obviously did not simply take my word for it, because she grabbed my arm and intensely inspected the placement for herself. She decided that it was not good enough and washed it off and then repeated the process a second time. Now, it was perfect.

We were now ready to begin the tattooing. Madoka set up a folding table for me to lie upon. When I got up upon it the promptly legs gave way, and the table, with me on top of it, violently collapsed to the floor. Madoka shrieked, Hori-nao gasped, I laughed. Madoka, with her hands still planted on her rose blushed cheeks, offered me a rapid-fire secession of apologies. I just laughed about it, picked myself up off of the floor, and got ready to jump right back up on the same table that had just bucked me off.

This time the table held my weight, and Madoka began tattooing. Her touch was extremely light and almost unbelievably smooth. She felt the art, this was certain- each line, each movement seemed to be flowing through her. She then contorted my arm in a way that coincidentally had my hand falling really close to the apex of her thighs. She then giggled at my nervous reluctance to keep my hand in this position. I just closed my eyes and tried really hard to not allow any thoughts, other than those of the needles entering in and out of my skin, from entering my mind. I soon became incredibly relaxed. Madoka worked very quickly over me and the tattoo was soon completed. I then stood up and hurried over to a mirror to inspect the new artwork that was indelibly etched into my skin. It was beautiful; the colors were radiant. It was so well designed and applied that it moved with my arm, as if it had always been a part of me. I thanked her profusely for putting something of such immense beauty upon me. She then photographed the tattoo for her collection and bandaged me up.

It was now time to complete the deal and I made a motion to pay, which is something that is always a little uncomfortable in the tattooing setting. Madoka then unsteadily picked up a calculator to show me how much money I owed her, and the price that she typed out was fifty dollars less than what she initially quoted. Perhaps it was a gift; perhaps it was . I was floored and I thanked her some more.

I now felt a touch reserved about leaving. I simply did not want it to be over; I simply did not want to say goodbye to Madoka, to my horimono studies, to Japan entirely- I was set to leave it all in a couple of days. I was thoroughly charmed by all that I had experienced through my study of horimono and, by extension, Japan. But it was high time- this I knew- and I gave one final bow, one last look, one last smile and turned and walked out of Madoka’s studio and into the busy Kyoto streets.