You are here :Home Articles Shenzhen, China: Where Your Stuff Is Made

China makes, the world takes. This is the catchphrase of our time, the commercial layout of our era, and the place where this “making” is happening has become of ever increasing interest for the world’s takers.

Where does this stuff come from?

This question has launched dozens of books and hundreds of articles, but the pursuit of the answer invariably leads us to one place: Shenzhen and the Pearl River Delta, a.k.a. The World’s Factory. 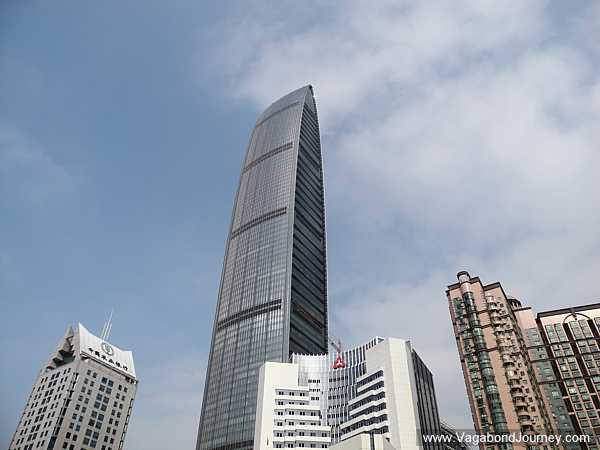 Shenzhen is about creation. Shenzhen is about running the world’s assembly lines faster and cheaper, it’s about morphing raw materials into the stuff most of us in the world take for granted. It was China’s first Special Economic Zone (SEZ), the country’s window looking out upon Hong Kong, which it borders. It was here that the People’s Republic of China first tentatively staged its international free-market experiment in 1978.

Following the success of the Shenzhen SEZ, another was opened at Zhuhai, which sits directly across from Macau, and the Pearl River Delta Economic Zone was later created. What this meant was an incredible influx of foreign investment, tens of thousands of factories, and the rise of the Chinese manufacturing empire in Guangdong province. The rest is history.

The Chinese are rarely hesitant to completely clear massive areas of real estate, relocating the residents, and redeveloping it to meet the demands of whatever project is at hand. In this way they can create entire infrastructures that serve a particular function. The Pearl River Delta was developed specifically to be a manufacturing epicenter, and everything that a factory could need is right there. 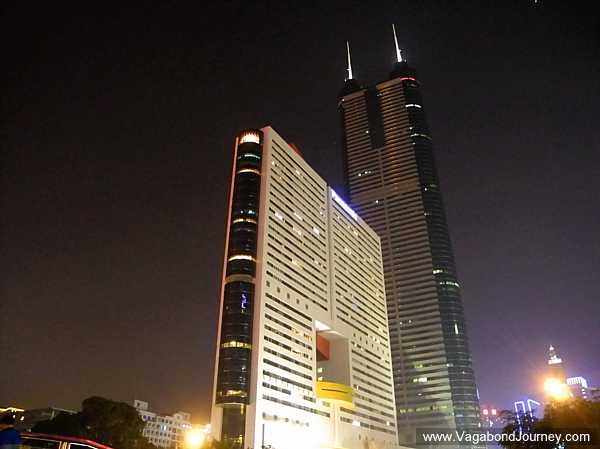 There are tens of thousands of factories in this region of the world which was made to be a one stop shop for manufacturing. At its height, it was estimated that factory workers in Guangdong outnumbered the entire workforce of the United States. Some factories, such as Foxconn, are massive cities in their own right, employing a quarter of a million people to assemble the world’s stuff. Every second, another 20-foot-long metal shipping containers packed full of exports is shipped out of the Pearl River Delta. 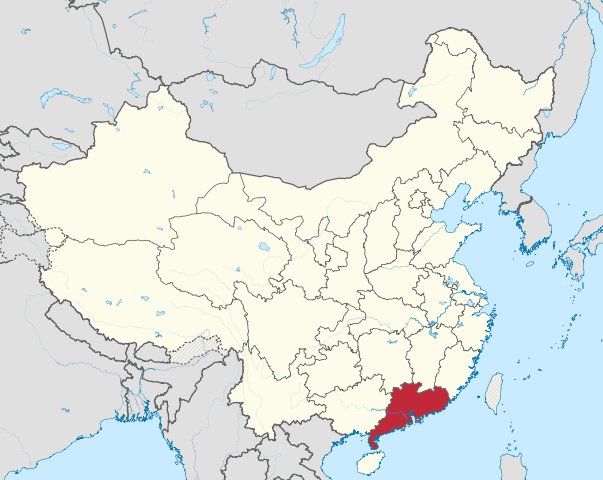 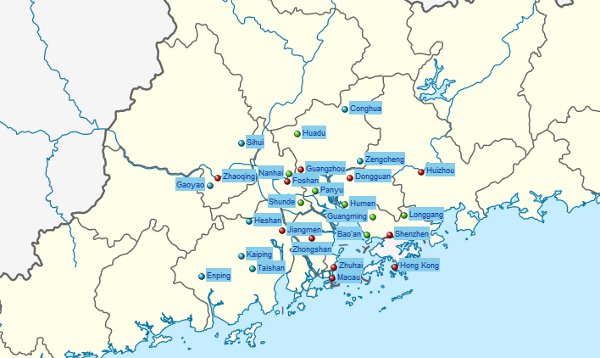 Map of the Pearl River Delta

It’s not just all dollar store junk either. Quanta, Compal, Inventec, Wistron, Asustek are five companies that operate out of the Pearl River Economic zone that I’ve never heard of before, but make most of the world’s laptop computers. Our computers say Dell, Sony, Compaq, HP, Lenovo-IBM ThinkPad, NEC, Gateway, Acer, Asus, or Toshiba on them but they are actually made — and in many cases designed — by the companies mentioned above. If you’ve ever had the fleeting suspicion that Dell Laptops are essential the same as Acer which are essentially the same as Asus, you’re right: they’re made from the same stuff by the same people. Sometimes competing computer brands are even manufactured on the same assembly line. They only way that many of these laptops differ is in the brand label that’s printed on them, the crapware they’re pre-installed with, and the boxes they come in. This is manufacturing in the 21st century, where production has reached a new pinnacle of efficiency as many different covers are attached to the same book and then sold as competing entities. 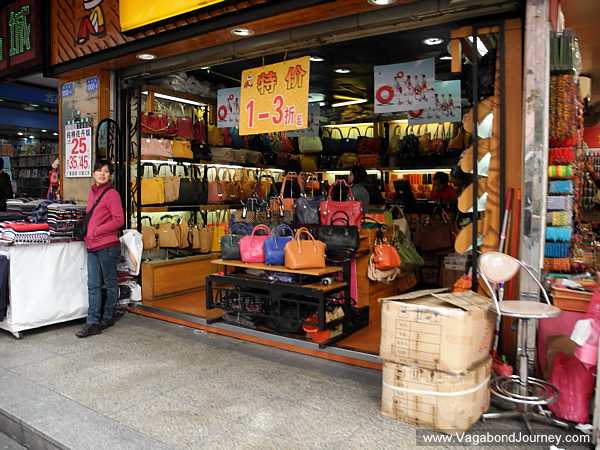 I can remember watching video footage of factories in China that showed endless rows of thousands of workers assembling products by hand. I can remember thinking how archaic this methodology was in the age of machines and automated manufacturing. What I did not know then was that the manual element here is one of China’s manufacturing advantages. In point, humans are adaptable — much more so than machines. Where automated assembly lines need to be reprogrammed or re-provisioned with different parts if there is a change in a product, Chinese workers can simply be shown what to do differently and respond almost instantaneously. The Chinese have all the machines available to run their large factories, but many continue using manual labor by design. In today’s world of machines replacing humans, the human machines still maintains some advantages: they can learn and adapt.

I’ve never really thought too much about how the products I use were made. I just assumed that some machine in some factory made them with dumb precision. Though this is often the case, it’s not a rule: many of the electronics that I use and clothes that I wear were made by a string of humans somewhere in China who do the same little task multiple times per minute, 12 hours per day, six days per week. I’m looking at my computer now and I’m marveling over the fact that many of it’s components were glued together and snapped shut by a pair of human hands in the Pearl River Delta of Guangdong. 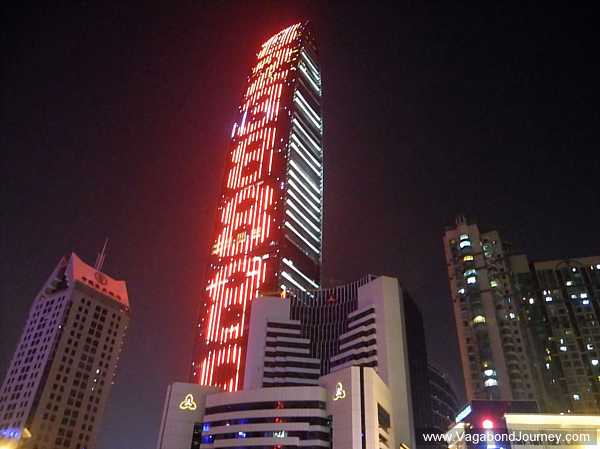 I have a friend in Taizhou who used to work as a fashion designer for a factory in Shenzhen. She explained with an embarrassed giggle that “fashion designer” meant being on the front line of the knock-off process.

“I would go online and find pictures of fashion shows and clothes, and copy them.”

She was employed by a factory, and when she completed a design it would be sent over to the manufacturing floor and, within no time at all, her Armani replicas would be shipped out to the world.

I asked her if she felt it was good to copy the clothes of other companies.

“I think it is not good,” she spoke after a brief pause. “But Armani products are very expensive and not many people can buy them. If I copy clothes we can sell them cheaper.”

This is perhaps the prevailing justification for knock-off products in China. The slight of ethics is made up for by cheaper prices for consumers, the ends apparently justifying the means — a masking of a voracious understanding of capitalism with the proper socialist overtones. 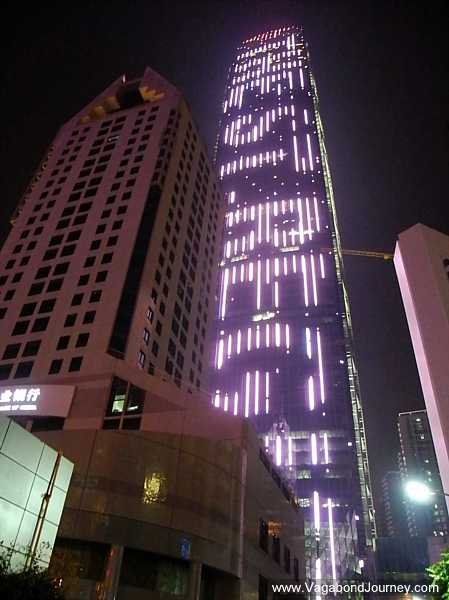 The Skyline of Shenzhen shows this economic progress perhaps better than anything else. In 1979, the tallest building there was a mere five stories. Now there are over 350 skyscrapers, the tallest having 100 floors.

It’s called the Kingkey Finance Tower, and it’s by far the tallest building in Shenzhen, the second tallest in China, and is currently ranked number nine in the world. It was completed in September of 2011, and at 1,440 feet it reigns high above the colossal towers of Shun Hing Square, which used to be the city’s highest building. It looks like a gargantuan wood chisel and essentially acts as a gigantic billboard at night — it’s thousands of flashing lights running advertisements.

I walked into the Kingkey building one night and made my way for the elevator. 90 something floors later I stepped out into a cafe bar and made my way for the nearest set of windows. From this vantage point I looked out over what has become of China’s first SEZ. I could see the city’s numerous skyscrapers from above, their lights sparkling down below with everything else. Even the duel towers of the Shun Hing building looked miniature. 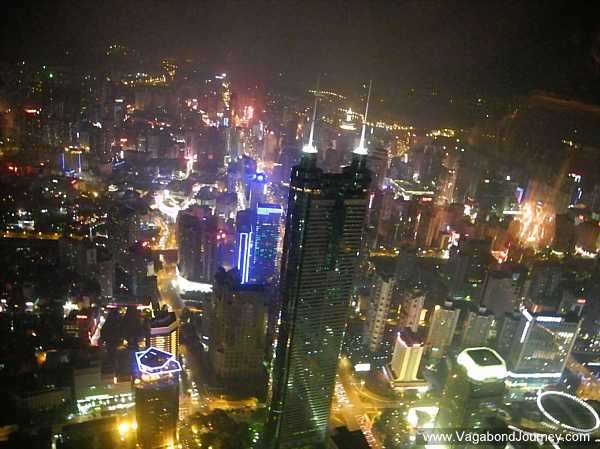 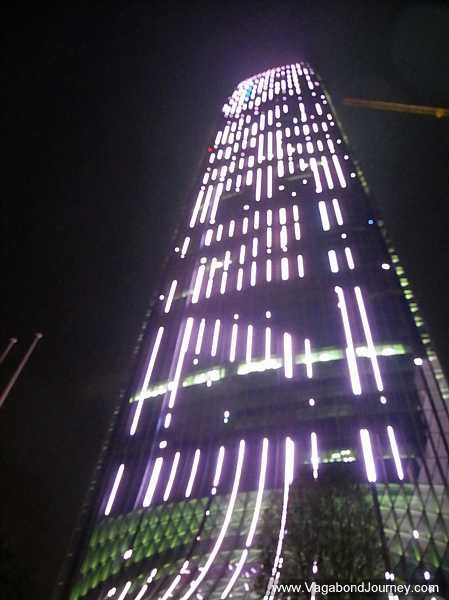 From here I could also see the askance way that this city was rapidly developed. The highways and streets swerving nonsensically this way and that, intersections came together at strange angles, and entire grid seemed completely scrambled. This city’s lights illuminated a place that looked like a birthday cake that someone dropped on the floor: a place that was smeared this way and that, apparently developed by accident or happenstance, lacking any semblance an overall plan. Shenzhen seems to have an every development for itself ethic — perhaps this is the Chinese take on free-market capitalism.

I ventured up to the top floor — number 100. A hostess attached herself to me as I walked around looking out the windows. I had no interest paying $10 for a beer and some over-bloated service fee so I kept moving. I lost her as I shot up a spiral staircase and into the skyscraper’s bird nest. I was at the top of Shenzhen’s tallest building. 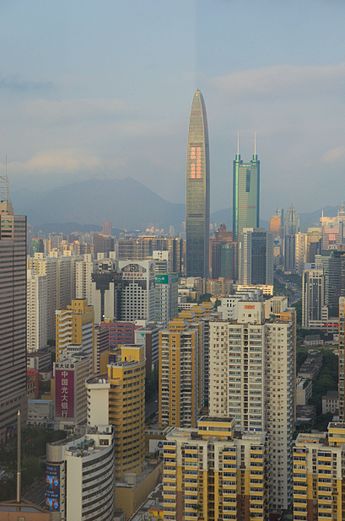 But the tenure of the Kingkey tower being Shenzhen’s tallest will be short lived. Currently under construction is the Pingan International Finance Centre, a 2,126 gargantuan skyscraper which is set to be taller than even the Burj Khalifa in Dubai — which is currently the world’s tallest building. But it is not slated to overtake its title, as there are other skyscrapers in China currently vying to fill that bill.

So this is what happens when a country with masses of cheap labor, a highly organized and mobilized culture, a voracious entrepreneurial sentiment, and full governmental backing combined together at the brink of the globalization age. For thirty years money paved the streets of Shenzhen’s financial district, but turbulence is in sight: it’s widely assumed that the growth of the Pearl River Economic Zone has already peaked. It is now thought to be on its way down.

My friend in Taizhou explained to me what became of the factory she once worked as a fashion designer in. She typed a word into the translator on her smartphone and showed it to me. It read, “Bankrupt.”

This has been a recent reality for many manufacturers in the Pearl River Delta. With the 2008 financial crises thousands of factories closed down as a result of decreases in orders from foreign companies. On top of that, environmental laws have kicked harder, workers have begun demanding higher wages and better working conditions, and with the expansion of free market reforms across China, migrant workers are no longer descending upon Guangdong factories droves, which has all had the effect of driving up the cost of production. It is now no secret that products can now be manufactured cheaper in other countries like Vietnam, Bangladesh, and India, and many big companies have started leaving China behind — just as they did the USA and Europe a couple of decades earlier. Nike and Adidas are already gone, and many multinationals are looking to follow.

As of now, the World’s Factory continues knocking out products and shipping them around the world, but the future of this role has been called into question. As Tianjin builds a replica of Manhattan, parts of the Pearl River Delta may become replicas of Detroit. There may come a day very soon when the origins of our stuff becomes more difficult to provenience.

« Macau: Welcome To The Most Crowded City On Earth
The Traveling Traditional Chinese Opera »