You are here :Home Art and Music Nazis, Communism, and Wine in Moravia

HODONIN, Czech Republic- “Wine is made by god. The wine maker can only damage it,” spoke the old wine maker Vlasomir Gloss,  as he sipped reverentially from his glass of wine. He then paused for a second as his words took effect upon his audience, and then added with a coy smile, “Most wine makers damage it.”

I was promptly adopted by a family that runs a geology museum  in the small city of  Hodonin, on the Slovak border of the Czech Republic. Over glasses of mojidos and sweet conversation on my first night in their city, the family invited me for a visit to their wine making uncle, who lived out in the grape growing hills of Moravia.

The next day I smiled as I jumped into the back seat of their car. I like wine.

We soon arrived at the winery, and I was introduced to their uncle, Vlasomir Gloss: a jolly faced wise looking old wine-maker with a sparkle in his eye and life in his gait. He had been growing grapes and making wine for the past 56 years, and it shown in the bright continence of his time-worn face. An accumulation of earth was permanently entrenched beneath his fingernails, in the creases of his hands, and well worn into his workman’s overalls thus giving him the appearance of being a virtual piece of the land that he lived off of. He seemed to be a man who played his part in life to the fullest.

I was then taken into one of their uncle’s wine cellar and was shown some of the big jugs and barrels which transform the grape into that heavenly substance known in these parts as vino. The jugs looked old, and the tepid yellow liquid corked up in them looked to be far from wine, but I enjoyed the novelty of the cave-like cellar and poked at the damp encrustations that were layered upon the walls and ceiling. My friends translated their uncle’s words and explained to me the whats and whys of wine cellars as I rummaged around poking at things and taking blurry photographs.

We then exited the cellar and went up into a wine tasting room and sat around a large wooden table on cedar wood benches. There were “best wine” awards all over the walls and “best wine” trophies upon the surfaces of the tables. I took a seat at the far end of the room. 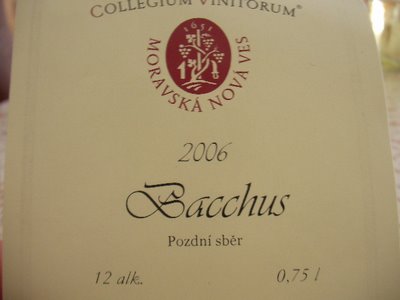 Everyone gathered around the table as their uncle brought in a label-less bottle of white wine and handled it tenderly as he steadily uncorked it with one smooth effort. He was a man who not only made wine but also loved it – the redness of his nose and sparkle in his eye as the cork popped told me this.

“Riesling,” the old wine maker said as he poured out the glasses. We then toasted each other, sniffed our wine with reverence, and sipped away merrily. Many questions where then asked about wine and how it is made. There was chemist at the table and the conversation got complex. The only thing I took out of it is that the transformation from sugar to wine is the most difficult chemical process in nature. Other than that, I just drank my wine. 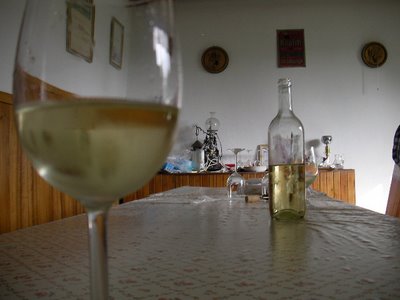 Without a good working knowledge of chemistry, I tried to steer the conversation towards something that I could pick up on. I wanted to hear some old stories about Nazis, Communists, revolution, love, life, and wine. I wanted to know how the people of the countryside of the Czech Republic fared against invasion after turbulent invasion, fared against the little Hitlers and the stupid communists.. I wanted to hear about life, peril, and the groundwork that had woven itself into the nature of the joking wine-maker who sat contently in front of me.

“We laughed a lot in those days, but our laughing was for crying,” the wine-maker said as he lead us into tales of life under foreign rule in the rural south of Czechoslovakia. “Things were not that bad under the Nazis, if we did not want to participate they left us alone, but the Communist were very bad, they tried to make everybody be a part of their system,” He continued with Shishuka and Pavlov translating his words into English for my benefit. I took his words in with open ears.

“What kind of work did you do during communism?” I asked. He told me that he loaded and unloaded sacks of grain from train cars, and explained that communism virtually flipped the modus-operandi of social Darwinism.

“It was the stupid people who obtain positions of power under communism, and that is why it did not work,” the wine-maker explained with a gruff laugh as he told me how the idiots of society ran the country and how the intelligent and educated were forced to do menial labor.

“My group leader was a very stupid man,” his story continued, “so I would always have to tell his boss to tell what to do. “Under the communist, nothing worked.”

Shishuka’s uncle was once offer a promotion that would make him a work leader, and he declined the offer with the following line of socialist logic:

“According to communist ideas, the lowest strata of society is the most powerful, so I asked them why they were trying to degrade me by offering me a promotion,” he spoke with laughter. We all laughed.

“We survived thanks to humor,” Vlasomir added with a hint of satire in his voice.

But I believe the wine also help. Moravia is a grape growing region, and almost all of the families in this part of the country produce their own wine. Even during the height of communist rule, the people of Moravia would not let their vineyards be socialized or their wine production controlled or regulated. So the people drank wine, made satirarical jokes, and let the hard times pass as if in a dream.

The Moravia workers amused themselves with adapted communist slogans like, “Soviet forever, but not for one second longer” and pretended to be working, as they trudged through the glorious days when the worker controlled the means of production. The intelligent and capable toiled at mindless tasks and the artists plied their arts with a shovel in hand. For forty years this stifling repression continued, and the people of the Czech Republic waited patiently for the last Russian soldier to leave their borders.

Throughout all of this Shishuka’s uncle continued making top shelf wine and drank it with a satirical glare at mother Russia. His wine really was very good, and it was perhaps the best that I have ever had. I tried to find out if there was a secret to making it, and he only credited the grapes and subtly implied that it was all a matter of feel. Shishika’s uncle had been born into a wine-making family, and the practice was very much in his blood. Generation upon generation of wine producing knowledge had been passed down from the depths of Czech history and accumulated in the glass of wine that was sitting before me. I sipped it in absolute reverence, for it was truly a Godly substance.

I then asked Vlasomir if his children made wine, and he quickly replied, “They drink it.”

I took this as an indication that he would be the last of a long line of vintage wine-makers in the southern reaches of the Czech Republic.

“I told my kids to learn how to make wine or to drink it from the box,” he said, implying that if his children abandoned the family’s wine-making tradition that they would have to resort to drinking low quality wine from the bottom shelf of the grocery store. He was speaking the truth, as he knew his age and that his health was beginning to stagger. Cultures change, people die, and traditions fade away, with each extinguished line of traditional knowledge our world gets a little closer to drinking a future that is akin to boxed wine.

Another bottle of wine was opened by Shishuka’s uncle, and I drank my glass with the knowledge that our world has quickly changed. People move quickly now, and few have the patience to wait for the grapes to properly ferment. I looked up at Shishuka’s uncle as though I was staring upon a living museum. This man had lived history, and he knew old-time knowledge. I savored this brief glimpses into a world on the brink of extinction and regretfully finished my glass of wine.

« Tibetan Refugees in India – In a Land of No Return
Graffiti In Portugal: The Other Side Of The Wall »