You are here :Home China Macau: Welcome To The Most Crowded City On Earth

Macau is the most densely populated city on the planet. An average of 47,728 people live in each square mile of this little peninsula, and this is evident the moment you arrive in the place. Stepping across the border from Guangdong Province to Macau was like entering a sick experiment to find out what happens when a when a population of humans grow beyond the carrying capacity of their environment and are then provisioned with cars, motorcycles, and buses. The result is a daily reality for people living in this former colony.

Macau is built up, way up. Being only 11.5 square miles in area, this is one of the most vertical places on the planet. Apartment high-rises are literally skyscrapers, and they are crammed together side by side like cigarettes in a pack. If travel is a pursuit of discovering how people around the world live, then Macau is an essential place to visit: this is urban living on another level.

What is this place?

Macau was the first European colony in China and the last. From the mid-16th century to 1999, the Portuguese first used Macau as a trading post and later on formally colonized it. Technically, Macau is now a part of China, but under the auspices of China’s “one country, two systems” platform, Macau will maintain a high degree of autonomy until at least 2049. Under this system, China takes care of the territory’s defense and foreign affairs, and Macau is pretty much free to do as it pleases in terms of immigration and customs, their legal, police, and monetary systems. 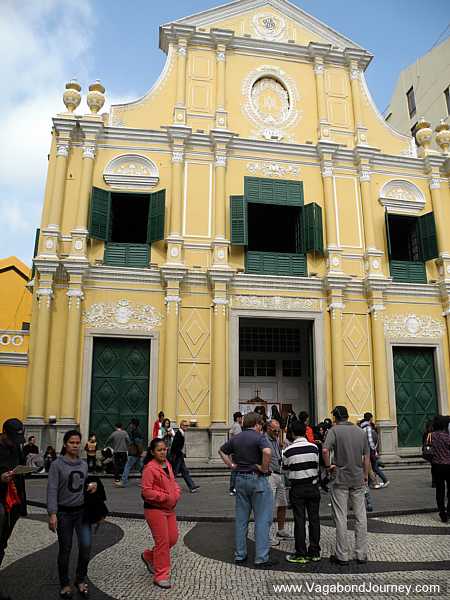 As far as the traveler is concerned, Macau seems in every way like a different country: you cross a border to get there, have your passport stamped, and exchange money just like you would if you were going between two different sovereign States. Even people from China must go through immigration and customs to get to Macau and vice-versa for the Macanese going to the mainland. As of now, though technically within the sphere of China, Macau is firmly in control of itself.

It was my impression that Macau would be an admixture of cultures, peoples, and languages, but everyone there seemed pretty Chinese to me. I heard only one language in the streets, and that was Cantonese. Apparently, the Portuguese themselves split a long time ago, and a mere 2% of the current population of Macau is of Portuguese or mixed Portuguese/ Chinese descent. In fact, nearly half of the people currently living in Macau were born in mainland China, and the flood of immigration has essentially diluted the colonial era culture to the point of irrelevance. 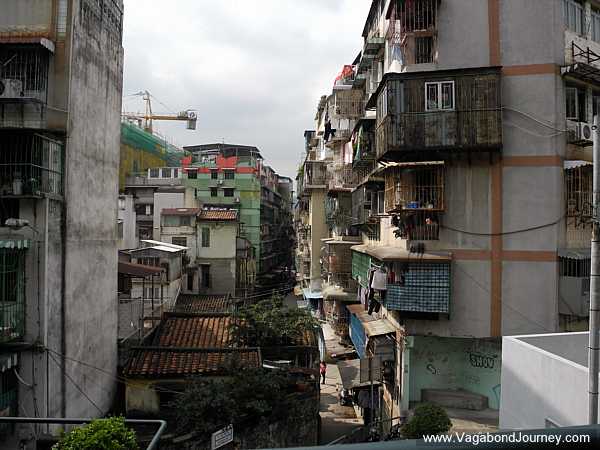 Though at least four things did stick from the time of Portugal’s rule: religion, architecture, food, and legacy. The first three are self-explanatory: Christianity is very present here and its holidays are public events, colonial era buildings stand eave to eave with modern high-rises, casinos, and skyscrapers, and the food is a Portuguese/ Cantonese mix mash. Each of these topics deserve their own article, but what surprised me most was the legacy of the colonial period that is almost nonsensically still applied today. 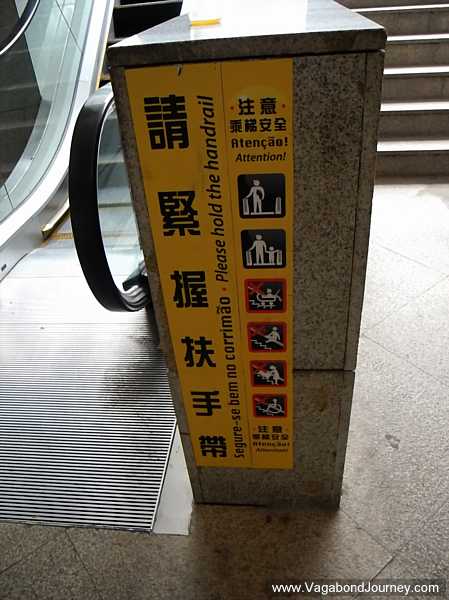 I’ve never seen more linguistically varied signs anywhere in the world than in Macau. Some things were even written four different ways: in traditional Chinese characters, in Cantonese Romanization, in Portuguese, and in English. This, perhaps more than anything else, shows the historical transitions of this place. But what is interesting is that Macau seems to be hanging on to its Portuguese roots against the tide of cultural evolution. 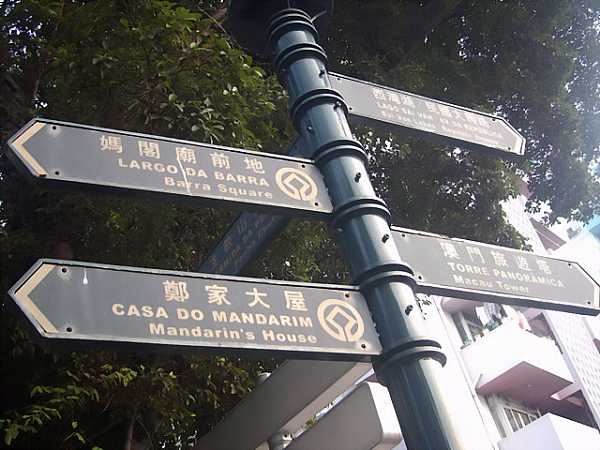 Though Macau was once a colony of Portugal, you don’t come here and expect people to understand Portuguese. A mere 0.6% of the locals speak this colonial language in their homes, but it’s still used on street signs, buildings, businesses, and just about everything that appears official. This is a place that has all of its public signage duplicated in a language that pretty much nobody understands. This is one of the most obtuse throwbacks to heritage and tradition that I’ve yet to witness in my 13 years of travel. To put it bluntly, Portuguese is an official language of Macau that hardly anybody there speaks. 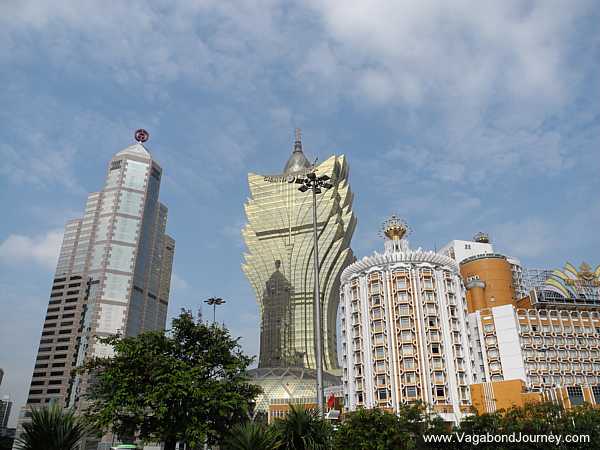 There is one iconic symbol that has come to represent modern Macau: casinos. This is the only place in China where commercial gambling is legal. They are massive, they are almost everywhere, they are in the way. In a place that is so densely crowded with people massive amounts of space have been allotted to behemoth structures housing hotels and overgrown gambling dens. The association with Macau and casinos cannot be underestimated: these things are this places economic lifeblood. To put it in perspective, the amount of money flowing through casinos in Macau is five times that of Las Vegas. 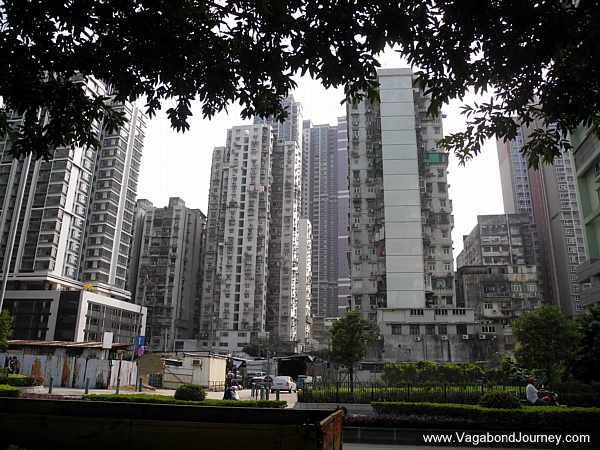 An interesting point to note is that while Macau is the most densely populated city on earth it also has one of the lowest birthrates. So where do all of these people come from? China.

The Chinese go where the money is: there is perhaps no more mobile population on earth, especially when it comes to places within their terrain. Immigrants from the mainland make up around half of Macau’s population, and 25% of the territory’s workforce had been recently imported.

I had to keep this in perspective as I walked though the streets, bumping into people, having people bump into me, getting stuck behind crowds inside convenience stores, and trying to make my way through this city. Few places in the world are so crowded that people actually run into you in the streets, but in Macau this seems normal. 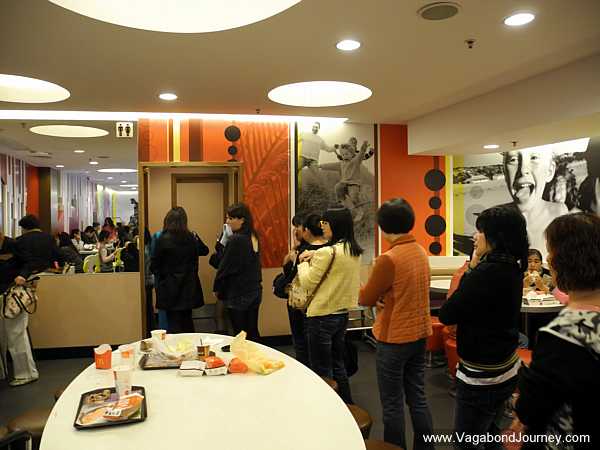 Line for bathroom at McDonalds

Some public necessities seem to have been crowded out of crowded Macau as well. Things like bathrooms. I searched for a public toilet for over an hour in the central tourist district to no avail. Eventually, I gave up and headed into a McDonalds. Unfortunately, everybody else seemed to have the same idea.

I later photographed a local pissing in the street and felt vindicated. I guess this is what you have to do here.

Macau is a place where humans have apparently bowed down to a new colonial power, albeit of of their own creation: automobiles. These monstrosities have shaped the city to their liking, and everyone and everything seems to defer to them. Many old cities in this world are not really suited for modern transportation, but I’ve never experienced a place rendered so difficult to be in because of it. Macau is a third the size of Manhattan, why would anyone need a car? 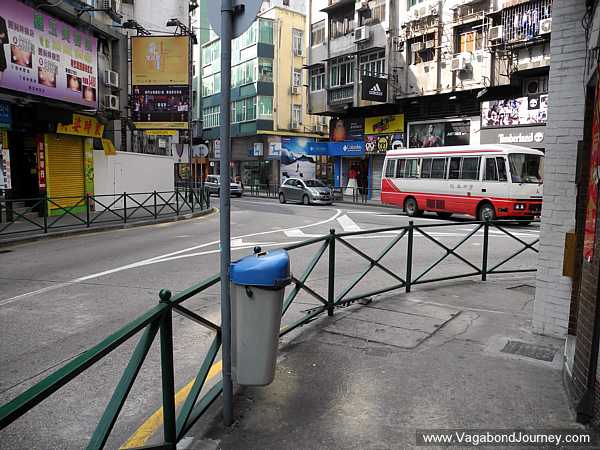 Barriers between sidewalk and street. there is no way to cross either street at this intersection.

To manage this traffic and pedestrians Macau put steal barriers up between the sidewalks and the streets. This sounds like a good idea until you realize that many of these barriers don’t have gates or openings at some intersections. Seriously, it’s like being a cow in a corral. You walk up to an intersection wanting to continue going straight but there is no opening in the barrier, and you either need to jump over it or turn down another street and walk in the wrong direction until you find a stairway overpass or a break in the barrier to cross to the other side of the street and backtrack to where you want to be.

Another side of this place 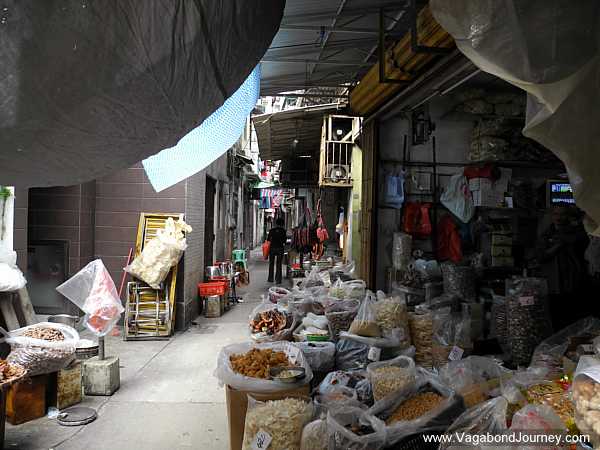 Back alley in Macau 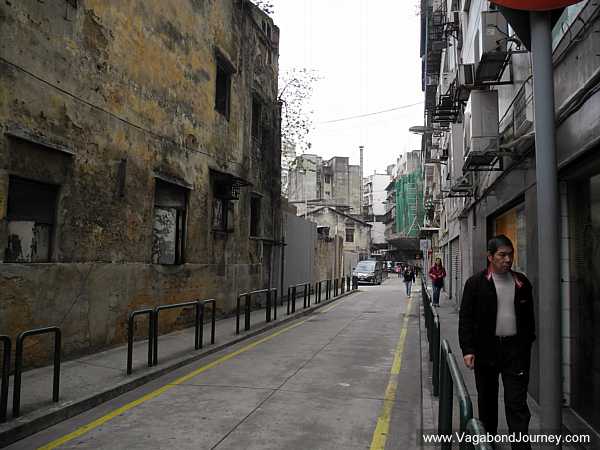 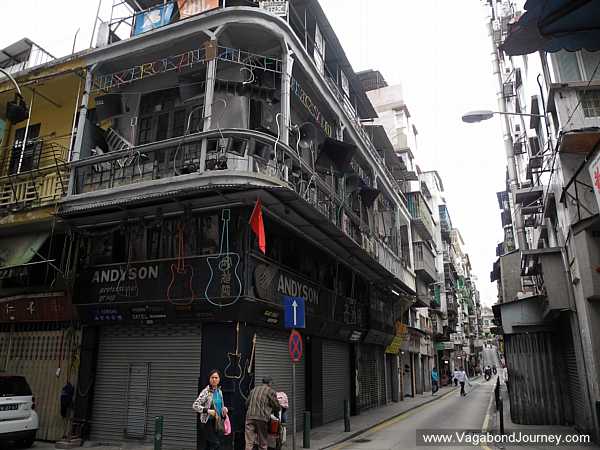 Outside of the tourist district, away from the casinos, in the little alleyways and corroding high-rises where the “folk” live there is something more to Macau. In the residential areas the people smiled when I walked past them, and they giggled a little as I snapped photos of the things that I thought were interesting but they regard as everyday.

Though this territory has seen a tremendous influx of new residents over the past decade, these people seemed to have adapted to these crowded conditions well. The bottom floor of most residential towers are full of little shops, and most of the streets are so narrow that the traffic is even choked out, leaving behind a calm sort of slow-paced, old-China vibe. 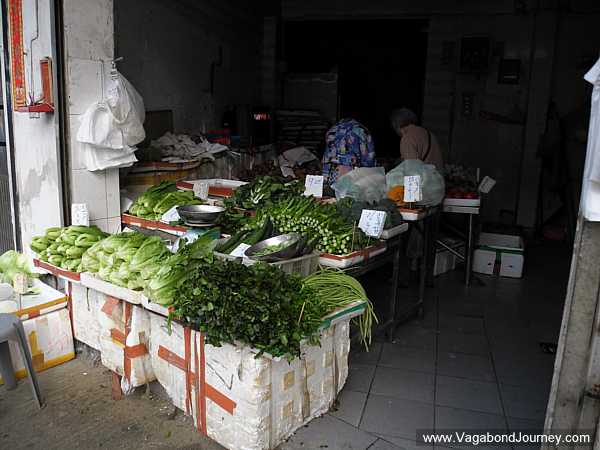 But then you pop out of one of these residential areas and are again in a place that looks and feels just like the most densely populated city in the world should. Cars and buses are are again everywhere, and it’s difficult to even find a way to walk from one place to another because of the miniature highways that were obtrusively plopped down upon a city plan that was never meant to accommodate them.

Macau seems like a vision of an urban future that doesn’t end in a cathartic Apocalypse but just keeps on going and going. The buildings get higher, the people more numerous, the streets more crowded, and the traffic more omnipotent. There seems like there should be a natural breaking point to all of this, but Macau has shown that many cities of this world still has a long way to develop before meltdown.

I never thought that I would ever find myself running TO China to get AWAY from traffic congestion and crowds of people, but that was the case as I fled Macau. I figured that the best thing I could do for this place was depopulate it by one. 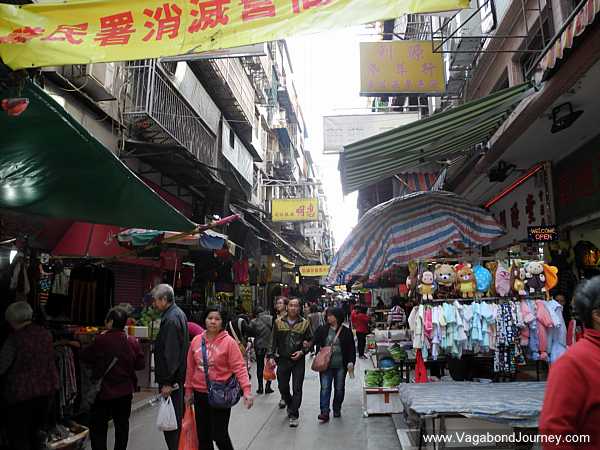 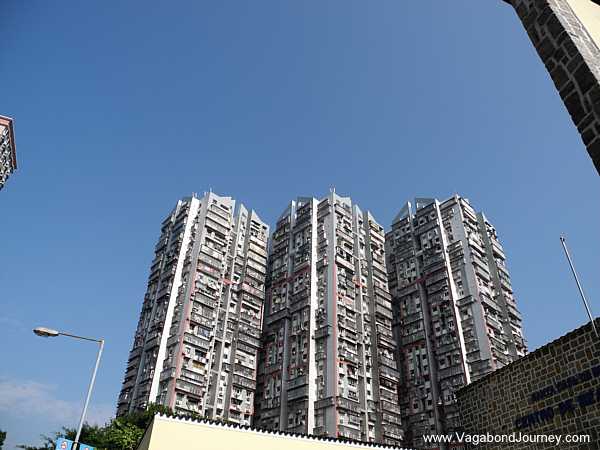 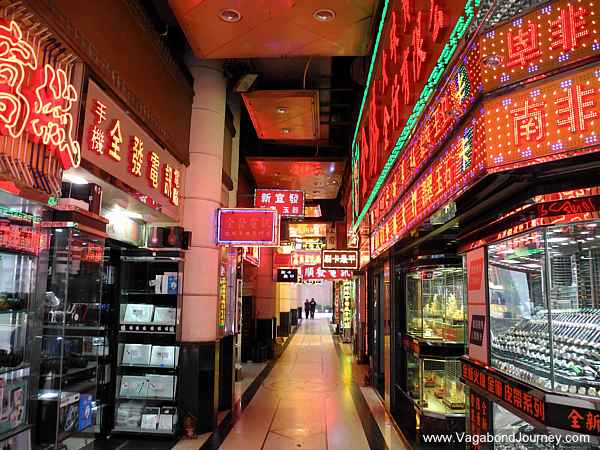 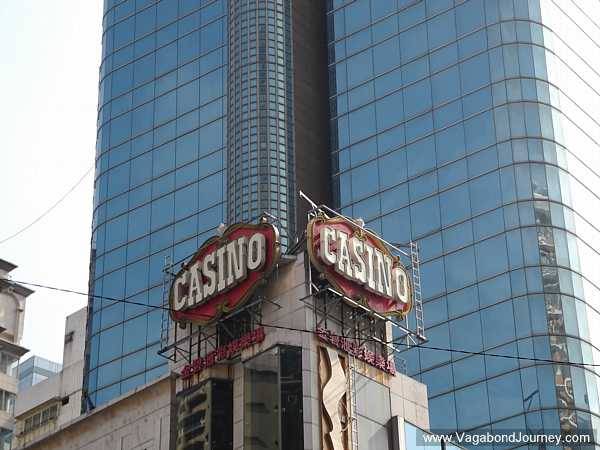 Casinos are what makes this place thrive 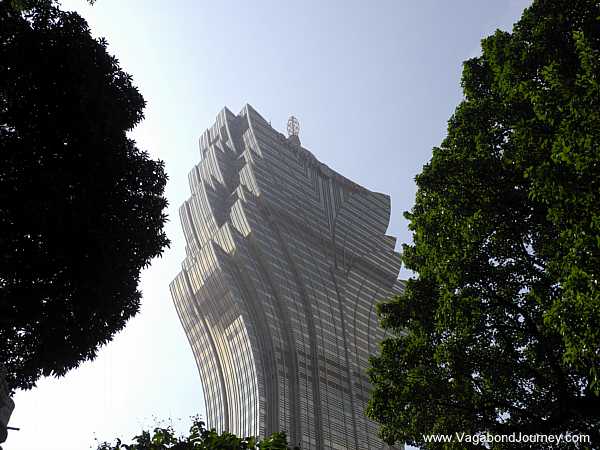 List of the most crowded places in the world

« New South China Mall: An Update On The World’s Largest (Ghost) Mall
Shenzhen, China: Where Your Stuff Is Made »