You are here :Home Articles Kinmen Island, Taiwan: What Is This Place?

In 2006, I listened as one of my professors at Zhejiang University in Hangzhou told me a story of how he spent his military years sitting on the southeast coast of China just staring across a body of water at Taiwan.

“How can you see Taiwan from China?” I asked, trying to match my sense of geography to the story he was telling.

This was my introduction to Taiwan’s Kinmen 金門 (pronounced Jinmen) Island, which was once known in the West as Quemoy. It is essentially an enclave of Taiwan a few miles off the coast of mainland China.

The professor continued his story about how he spent years just staring at this collection of small islands. He told me how he could sometimes see enemy soldiers on the other side doing the same thing he was doing: staring boredly across the waters that divided the two Chinas.

I traveled down the coast of China to look across this body of water for myself. I took an hour long ferry ride across to Taiwan — something that my former professor couldn’t have done without being a frogman saboteur just a few decades ago. When I arrived I stared back at the Chinese mainland and contemplated the thousands of young men who spent years of their lives standing right where I was, looking at what I was looking at, waiting for war. 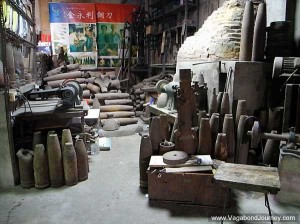 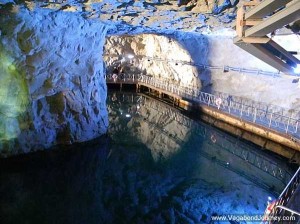 Tunnels dug beneath a hill on the coast of Kinmen so ships could take cover. 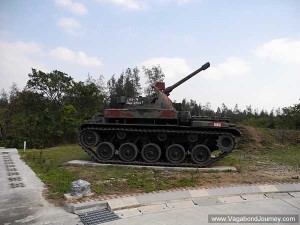 Tank that came to be known as the Bear of Kinmen. 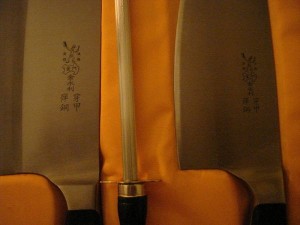 A Kinmen knife made from an old artillery shell

Kinmen Island lays just off the coast of China’s Xiamen Island and 200 km from Taiwan. Geographically speaking, the place is virtually enveloped within the maritime sphere of mainland China, and it is a mystery of geopolitics that it is a wholly controlled subsidiarity of an opposing political entity on the other side of the Straight of Taiwan. To put it simply, a bridge could easily be built between this Taiwanese island and mainland China — that’s how close it is.

Kinmen is traditionally a part of China, and has been a part of the country’s political, trade, and military systems since the 14th century. During the Chinese Civil War this small island was where the Republic of China made its final stand against the Communists — a stand that they have maintained to this day.

In 1949, Mao Zedong’s Communist forces ousted the Chiang Kai-Shek led republican government of China (also known as the Kuomingtang, the Nationalists, the ROC) and forced them to retreat to the province of Taiwan. The Communists then formed the People’s Republic of China (the PRC, the current government) and claimed control of the bulk of the country. But the ROC kept a massive amount of troops on Kinmen Island, which became the focal point of hostilities between the PRC and ROC from then on out.

The newly formed PRC logically felt that in order to defeat the ROC, who were now headquartered in Taiwan, and take control of all of China, they first needed to conquer Kinmen. This small island was essentially turned into a battlefield which stood between the two contending governments of China.

The Battle of Guoingtou then ensued. 19,000 Communist troops assailed the beaches of Kinmen in two waves thinking that they could take the small island in three days. They thought wrong. Knowing that an attack was eminent, the ROC troops covered the shore of Kinmen with thousands of landmines and hundreds of bunkers. Having underestimated their opponent, the PLA was virtually massacred, and the attack proved a complete failure. Kinmen remained in the hands of the ROC, and, with the rest of Taiwan, remained outside the bounds of of the Communists.

The following year the Korean war broke out and the United States made a move to neutralize hostilities in the Straight of Taiwan — which effectively put the ROC under the protection of the United States, a position they maintain to this day — and Kinmen continued on as a part of Taiwan hanging off the coast of mainland China.

But the PRC did not forget about this little stone in their shoe, and two “Taiwan Straight Crises” would follow over the course of the next decade where they would try to conquer Kinmen. In 1958, the PRC bombarded the island with nearly a half million shells over a span of 44 days which killed hundreds, but from then on out the skirmishes took on a more subdued form — generally consisting of marine commandos from both sides sneaking across the straight under the cover of night sabotaging their foe as well as the continuous shelling of propaganda leaflets.

From 1958 to 1979 the PRC on the mainland and the ROC on Kinmen engaged in an informal ritual which consisted of blasting each other with bombshells containing nothing other than propaganda leaflets on alternating days. For more than twenty years they would take turns sending these airborne public messages to each other as the standoff between the two Chinas continued. It is reported that the PRC shot hundreds of thousands of these shells at Kinmen during this time, unintentionally providing the residents there with a cottage industry.

Rather than letting the PRC bombshells littered all over their island go to waste, the people of Kinmen gathered them up to be recycled as scrap metal. Apparently, the steel from bombshells can be molded into some pretty good knives, and the industry the island became most famous for was born. “Kinmen cleavers” crafted from the shells of exploded PRC bombs are sold all over the island and exported to chefs the world over.

Kinmen continues to exist as a part of Taiwan that hangs of the coast of mainland China, which makes anyone with any kind of geopolitical sense wonder how it continues to exist. Of course, the PRC claims that Kinmen belongs to them while Taiwan claims that they are the legitimate government of all of China. This sixty plus year standoff has now started to grow stagnant and stale. It is now just a normal fact of existence that a spec of Taiwan lays within sight of China.

But fact of the matter is that Kinmen’s position is not unheard of in a world whose geopolitical layout was repeated scrambled and hastily put back together after a century full of major wars, revolutions, and the birth of myriad new countries. Small enclaves can survive completely surrounded by the geographic influence of much larger political powers, and there are various contemporary parallels that can be drawn with Kinmen:

I have often marvel at the little geopolitical oddities which speckle the world map. How did this happen? How does this work? It is clear that political divisions of land all too often happen by organic happenstance — rather than by intelligent design. Global politics is nothing if not a permanently precarious balancing act.

But the government of China still resolutely attests to the fact that Taiwan is a part of their country that will eventually be reunified. Technically, Taiwan is not an independent country, but, in actuality, it functions independently. Like so, Taiwan occupies a political grey area that nobody seems quite sure how to define.

China is a country that had an incomplete civil war: the Communists took over most of the nation but left the former government in control of a few islands in a political position unlike any in recent history. Taiwan in a geopolitical Catch-22: it’s not its own country but it doesn’t function as part of any other country either. China vows that if Taiwan did seek official independence that it would be cause for war. This isn’t a bluff, they’ve even created an anti-secession law which formally states as much.

As of now, Taiwan is left floating in a political no-mans-land. Only 25 other countries in the world recognize it — and those that do still see it as the legitimate government of all of China. Not even the United States, Taiwan’s prime benefactor and defender, officially recognizes it as being independent from China. The only international organization that acknowledges Taiwan is the Unrepresented Nations and Peoples Organization — which just about says it all. If one word could sum up Taiwan it would be “unofficial,” and, unofficially, 122 countries recognize and carry out relations with the ROC. Taiwan is not technically a country, it’s not a territory, it doesn’t function as a province, it’s not an overseas possession, it’s a place hanging in limbo amid a cross fire of political contention, face, and an acceptance of mutually exclusive sets of definitions. A precarious position ever under threat that the PRC will attempt to finish what they started in 1949.

But by now this balancing act has been going on so long that both parties continue the charade as a rote response. The border between Kinmen, Taiwan and mainland China is open, and people from both places cross freely, do business, and move towards mutual goals. The seas are calm between Kinmen and Xiamen, most of the soldiers have gone home, and the vestiges of former war games seem to now be more of a tourist attraction than something which regurgitates hatred for a long-term enemy. There was even serious talk last year about building a bridge between Kinmen and mainland China. In 2001, Kinmen began allowing tourist from the mainland to come over on package tours. By July of 2011 they were allowed to enter independently. Likewise, the people of Kinmen can visit China freely. From what I can tell, to a certain extent the two political entities seem to be growing back together naturally.

Like with many political spats in the globalization era, the potential for doing business trumps often ideology, history, or politics. China may be the political nemesis of many countries in the East Asian arena, but they are everyone’s bosom buddy when it comes to economics. China has too much that its neighbors want for them to put up much serious resistance, and bridges between old-time enemies have been built solid.

“The people on Kinmen have to very quickly adjust to the conversion of their former enemy into their economic lifeline,” a professor of Chinese history told the NY Times. In that same article, a bombshell knife maker on Kinmen was recorded as saying, “We fought, we bombed each other to hell, we made knives. Let’s get over it.”

With this, I present a series of articles on Kinmen Island that will run daily throughout this week on Vagabond Journey.