You are here :Home Articles What the Irish Water Protests Are All About, or How I Got Beat Up While Reporting on #Right2Water

Before going into my experiences with the Irish Water Protest, let me first explain what all the fuss is about. As a foreigner in the Republic of Ireland, I found it all a bit confusing. The way I saw it, I have always paid for the use of public water, why shouldn’t Ireland? But, when 150,000 protestors took to the streets of the country on a Wednesday workday, I realized there must be something to this overwhelming outrage.

In 2013, the Irish government passed the Water Service (No.2) Bill 2013, in accordance with the EU-IMF bailout conditions that said Ireland must introduce water charges by 2012/2013. Currently, the government has enacted a fee that will, supposedly, average 280 Euro per year for a family of four. But this would be a best case scenario. Many Irish households are not built for water conservation and, many times, the old rusty pipes that run the water into the house leak before the water ever leaves the taps. So, not only will the average customer be adding plumbing cost to modernize their plumbing, they will be paying for water that, in many areas, isn’t even seen as drinkable. According to the Environmental Protection Agency (EPA), the water regularly fails safety tests.

To make matters worse, a company named Siteserv has been put in charge of managing Irish Water’s mandatory installation of water meters. This company is owned by Ireland’s third richest man, who has been notorious for shady and possibly illegal business deals. This has driven the fear of the privatization of a service that was previously paid for with taxes.

Across the country, protests and confrontations with the police have been occurring at the sites of meter installations. It seems that one of the worst jobs to have in the country now would be a water meter worker.

The average Irish citizen would agree with paying for water in some way, but, as of now, they are being expected to pay a high cost for shit water, plus the costs of improving the plumbing system. Many see this as just another measure of austerity in a country that is, supposedly, out of the recession.

On the day of the largest protest, thus far, the noise of the crowds echoed in the office where I worked. My inner journalist needed to be in the action, and this was causing me major anxiety. Many businesses threatened consequences for employees who walked out of work to join the protest. It seemed that no one in my office was bold enough or cared enough to test our bosses.

By the time I left work, the crowds of over 35,000 had died down to a few hundred. Some stubborn protestors remained to block traffic on the key main roads of the city centre. The first crowd I witnessed gathered around a police barricade blocking the Government Buildings. The atmosphere seemed relaxed, besides the chanting and trading of insults with the Gardai.

“Nice uniform. Didn’t they used to be Black and Tan?”

One car, with an oblivious driver, tried to pass through the protesters who immediately got carried away and began to beat on the car, until it was forced to turn around. I found out later that a driver had run over and injured protesters, who were blocking the roads earlier in the day.

As the riot police presence grew, it seemed the crowds began to disperse. What many of the protestors probably didn’t realize was that the other alleyway entrances to the Government Buildings weren’t guarded by any police. One could easily jump the barricades and enter. Me and another journalist gladly took advantage of this.

Inside, the streets were empty, except for a few Garda who didn’t seem to care that we were there. I guess all the politicians were still hidden behind walls. 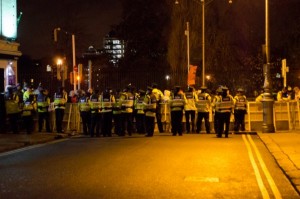 View from behind police barricades around the government buildings

Later, I made my way to O’cconnel Bridge, where I heard protesters were still attempting to block traffic at 7 pm. The crowd of almost one-hundred dawned Irish tri colors and political banners. Rumor was that the majority of these masked protesters were Sinn Fein and other faction supporters, who tend to practice more aggressive means of protest.

A mere hundred persistent protesters remained in the cold, while it seemed that almost all of the police presence had left. This useful tactic, by the Irish Gardai, is reliant upon the idea that if the protesters have no one to confront then they will lose interest and begin to dissipate.

I soon found out that the Gardai had given up on this theory.

The Gardai reappeared in mass of a hundred or more regular Garda, riot police, and dogs. The wall of police marched steadily towards the protesters who were blocking the road. As they approached, the crowd threw insults and taunted them.

I honestly expected the Gardai to halt before the crowd, but they continued straight through, knocking people down and dragging anyone who got in their way.

At this point, I was surprised, because I had never seen the Gardai act in such an aggressive manner. They seem to always be the butt of Irish jokes about their nonchalant attitude towards, basically, everything.

Part of the protesters fought back the aggression and a few, more violent, individuals hurled glass bottles that broke around everyone. Fists started swinging and some Garda were knocked to the ground, but most of the protesters raised their hands in surrender. I avoided most confrontation, as I pushed my camera further into the chaotic scene.

Reality hit me, literally, when I was punched in the side of the face by an unknown assailant and seconds later grabbed under the neck and choked by a Garda. The big fellow proceeded to toss me onto the sidewalk in a somewhat graceful, but forceful throw. I could tell he had practiced this.

After all the protesters were pushed onto the sidewalks, the confrontations seemed to take the form of strictly verbal abuse. The Gardai stood silent, as police always do, and took the insults with stern faces.

Soon, the traffic began to move regularly through the streets and the city returned to normal. Some stubborn souls remained, but the cold and sense of defeat drove most of the crowd away.

I, immediately, entered the local McDonalds and used the free WiFi to start uploading my video of the confrontation. In the end, the video was featured in seven different newspapers. My YouTube page became a source for intense debate about the use force by the Gardia and the overall water issue. I learned a few new Irish insults this way.

So what does the future of the Irish Water protest have in store? On January 1st the charging stage for metered homes began, and in April bills will begin being sent out. In thousands of homes across the country, including my own, the Irish Water application has magically disappeared. The government already said they won’t turn off the water, but they will bring it to a slow trickle. This way, it can only be used for drinking. With millions of households refusing to pay, if they do follow through with this, then it only seems inevitable that the protests will get a lot lot worse… and dirtier.

The words of everyone’s favorite Irishman, Liam Neeson, sums up the anger about the situation: 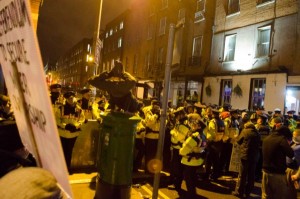 A protester entertains the crowd outside of the government buildings 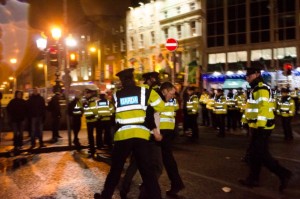 Protestor being arrested for refusing to move from the street