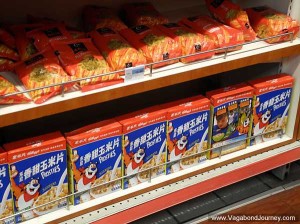 The international food aisle is something that’s becoming more and more popular in supermarkets throughout China. Where they once were obscure outside of the major cities, they have now become a common sight throughout the inner provinces. The expat communities here can pat themselves on the backs and proclaim that their tastes are being catered too, but they are not the main demographic these sections are marketed for. No, these specialty foods are being imported to be sold to Chinese consumers.

International food sections in Chinese supermarkets are the equivalent of “health food” sections in the USA. They are places in ordinary grocery stores that sell trendy, international, “healthier” foods at higher prices.

Healthier, as in not as contaminated.

(Read our article about food safety in China.)

In the wake of reports of babies dying from melamine added to milk, gutter oil being used in restaurants, mercury in baby formula, high levels of aluminum in noodles, heavy metals in rice, pesticides in pickles, antibiotics in fish, and steroids in pork — among many other food quality scares — many Chinese people with the means are seeking alternatives. Needless to say, food that is grown and produced in China has gotten an incredibly bad wrap over the past few years, and many people here now severely question their country’s food supply.

“We are very scared,” a Chinese friend explained to me, “we don’t know what is safe or not.”

Riding on this wave, it is now commonly thought that foods produced in other countries at least have a better chance of being less contaminated. This sentiment is becoming an increasingly popular one, and has lead, perhaps unfortunately, to just about any imported food brand or restaurant being thought of as healthier. KFC and McDonalds are actually marketed here as being cleaner and safer because they are multinational restaurants (though this position is starting to crumble with various food quality scares in KFC’s supply chain).

Whatever is the case, international food stores and sections in grocery stores are popping up all over China, growing in popularity in tandem with the country’s growing middle class. In this era, the idea of healthy living is a marketable commodity for the tiers of any given society that has excess money to spend. Buying imported products is a socio economic power play anywhere in the world, but this is especially so in a China where “internationalization” is such a hallmark attribute of the middle and upper classes. 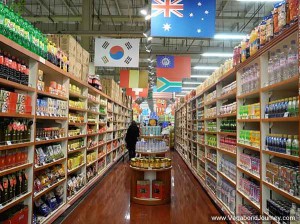 The imported food sections in Chinese supermarkets are in no way complete shops in and of themselves. They often have a rag tag, inconsistent splattering of various foods from the United States, Europe, Korea, and Japan that I truly have no idea how they ended up in China. The selections are often so random that it seems as if it comes from some kind of global second-hand food outlet sale. As could be expected, what is available is often processed foods that have long shelf lifes. We’re talking foods like breakfast cereals, taco seasonings, spaghetti sauces, dehydrated noodles, pretzels, cookies, jams, various type of strange “spreads,” and other packaged products that could easily serve as time capsules. But, thankfully, perishable items such as cheeses and other dairy products are often added to the mix.

I would usually only shop for imported foods when having a craving for a delicacy like cheese. My strategy is generally to eat what the working class people eat wherever I am in the world. But as the reports of severely contaminated foods and harmful additives continue rolling through the Chinese press and social media networks, I now find myself peaking over at the international food aisles of grocery stores more and more often. I wish I could take on a badass veneer here and say that it’s all media hype and mitigate this country’s food safety problems, but when the scandals continue seemingly without end and evidence surfaces of the impacts they are having on people’s health, it becomes logical to start taking stock of what the alternatives are.

In point, when high amounts of aluminum are being added to noodles and pesticides to steamed buns just to make them taste better, and plastic-based ingredients to products such as milk and soy sauce, I have to recognize that there is a problem here and restrategize.

From the China Daily:

More Chinese consumers are turning to imported food brands due to the domestic food safety scandals in recent years, according to a report published on Aug 20 by research company Ipsos.

According to the report, 61 percent of Chinese consumers said that their confidence in domestic food brands has declined during the past year, and 28 percent said they will buy more imported food brands to replace domestic products.

Dairy products are the most popular imported products, followed by grains, cooking oil and children’s food. 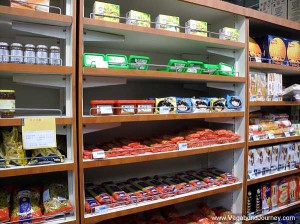 But, in the words of a Chinese friend: “There are problems with the food everywhere.”

A very true statement. It really shows the extent of the food quality crisis in China when the processed and packaged foods that are often called “junk” or even “poison” in the United States are regarded as a healthier alternative. It is true that there are health concerns related to processed foods everywhere in the world, but these problems are often not as blatant, extreme, or as wide-ranging as they seem to be here in China right now.

Whatever is the case, as China’s middle class continues to grow and consumers are increasingly empowered with more choices in the face of ever-continuing food safety scandals, expect the imported food sections in supermarkets to keep expanding.

“It’s not doomsday yet, but I think doomsday is coming,” a Chinese woman explained to me. “The air is unsafe, the food is unsafe, everything is unsafe.”

I had to agree: viewing American processed food as being a healthier alternative sounds like the beginning of the end to me too.