You are here :Home Architecture A Visit to Hallstatt, China: An Austrian Village Cloned

I descended a hill and rounded a bend, said hello a security guard decked out in some kind of Germanic military uniform, then walked out onto a precipice which overlooked what I came for: Hallstatt. The church’s towering steeple was the centerpiece of this quaint little European hamlet which laid on the bank of an artificially created lake within the contours of an artificially crafted hill. In fact, the entire place was artificial, from the landscape to the buildings to the people, for I was at Hallstatt, China.

No, this was not the UNESCO World Heritage site of the same name in Austria, it was the 1:1 scale copy of it in China’s Guangdong province.

The Chinese are known for their mastery at making knock-off handbags, apparel, electronics, watches, you name it — but this was a knock-off town. It is clearly evident that China’s plagiarism and copycatting has been taken to an entirely new level. Brick for brick, fixture for fixture, facade for facade, street for street they built a near replica of an entire place.

Is this allowed? Is this legal?

It is not my impression that hamlets are readily copyrightable, but China has demonstrated that they are definitely copy-able. To put it simply, this has never been done before. Never before in known human history has one country built a full-scale copy of a place in another country. Hallstatt, China is the mother of all knock-offs.

Just as they go about copying the design of a Gucci handbag, teams of Chinese urban planners, architects, and developers measured, photographed, and made blueprints of the entire historical area of Hallstatt. This was all done in secret, and Austria had no idea what was happening until well after Hallstatt the Second began rising out of dust of Guangdong province. In fact, the copycatting was only discovered when a set of blueprints for the clone was forgotten in a Hallstatt hotel by a careless Chinese architect in 2011.

Hallstatt, China was let out of the bag. A WTF? response resonated around the globe.

Just a year later, in June of 2012, the Chinese reproduction was ready for visitors.

The project was undertaken by Minmetals Land Limited, the real estate branch of China’s largest metals trader. With an investment of nearly a billion dollars, they set out to not only copy the historic district of Hallstatt but build a massive, Western style housing complex all around it. The reproduction downtown, apparently, is intended to act as a beacon to lure in the wealthy sects from the nearby Guangzhou/ Shenzhen megalopolis to purchase the vast array of villas.

Whether this works or not is anyone’s guess, but one thing is for sure: this place stands out. It was not difficult finding Hallstatt the Second, it’s as conspicuous as architecture can get in East Asia. I hopped off a bus in Boluo, flagged down a kid in the street, and showed him a photo of the village which I had downloaded onto my mobile. He looked down at the snapshot of a row of life-sized ginger bread houses and pointed me to the edge of town. A short motorcycle taxi ride later along a mud strewn, not-yet-completely-built road I was staring down at the replica village itself. 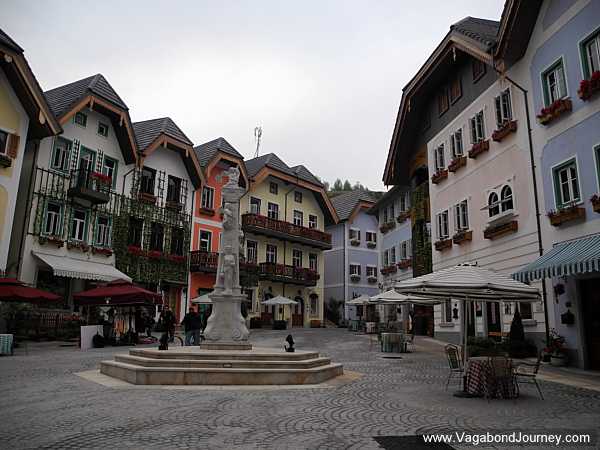 It was clear from the first moment I look at this place that the replication was incredible. This wasn’t some designer hand-bag type of knock-off, this was copycat perfection. The Austrian Hallstatt is wedged sort of askance between some hills and a lake, and the Chinese one is too. The developers even took into account the erosion pattern of the lakeside. Perhaps the only thing that was strikingly different between the two Hallstatts was that the original has giant mountains springing up around it — not even the Chinese can replicate those.

The resemblance to the real Hallstatt went down to the smallest detail. There were flowers everywhere, the sound of birds tweeting were playing throughout the streets from hidden speakers, the streets themselves were paved with bricks laid in semi-circular patterns, the fountain in the town center was an identical match, and the Sound of Music soundtrack playing on an endless loop could be heard everywhere. The Chinese not only cloned the buildings, but they carved out the physical landscape as well.

But I didn’t think the place was over the top until I walked up to a cafe and saw that it had the prices listed in Chinese RMB but with the Euro currency symbol. 58 Euro for a cup of coffee? Perhaps that’s one step over the line.

Though one thing is for sure: this was truly a replica of Hallstatt, not just a design inspired by Hallstatt. The buildings here really were near exact copies of the ones at the original town. When looking at photos of the Austrian Hallstatt and the Chinese one side by side, their dimensions, shapes, facades, and even color are almost identical. Even the tapering alleys and off-kilter positioning of the buildings were reproduced to precision. Aesthetically speaking, the Chinese really pulled this off. 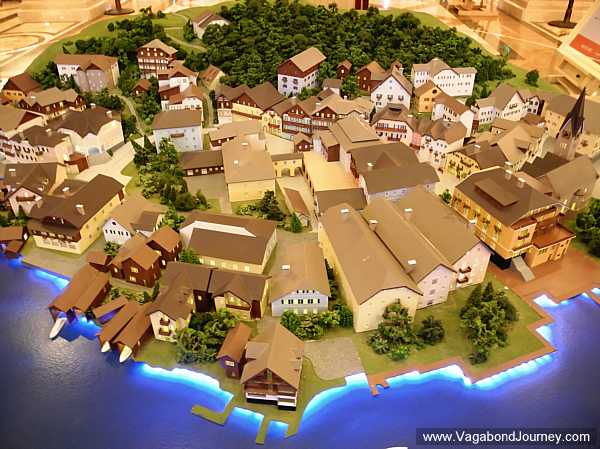 A replica of a replica

Surrounding the Hallstatt town center is what this project is really all about: a massive housing development. Covering the hills around the lake are Western style villas of various types and sizes. The cloned village is just the bait to pull in residents.

Though Hallstatt the Second is the first incidence of an exact replica of a European town, it is not the first Western style development to be built in China. Old World European look-alike towns are springing up all around the country: Shanghai has it’s Thames Town, Taizhou has Oriental Windsor Village, and other British, German, and Italian imitation developments are in the works. But what the two British style towns I mention above have in common, other than their architecture and tacky theme, is that they are both nearly deserted. These developments represent a new phenomenon in China: brand new ghost towns, the perfect symbol of the Chinese speculation market. Though houses in these Western style towns are sold easily, finding people to actually move into them has proved to be a challenge. The “stage-set” feel that these places inherently give off is highly exponentiated by the fact that they are virtually devoid of inhabitants. 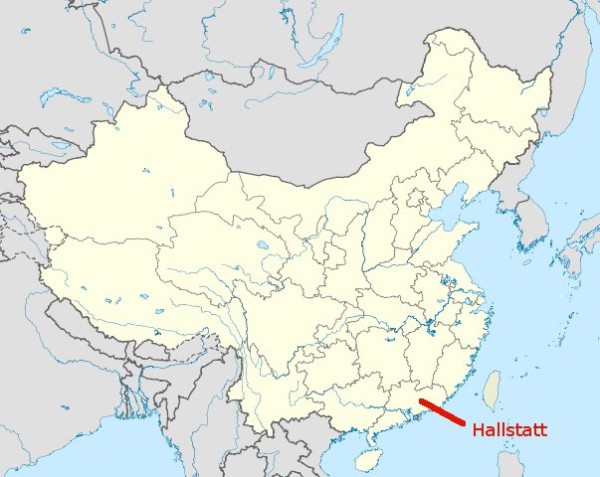 As I walked through the streets of the Chinese Hallstatt I could not help but to think that this place may be doomed to meet the same fate: built just to rot. Though there were magnificent, Austrian buildings that were copied to near perfection, it all came off as overtly lifeless: the only people there were portrait photographers using the ornate and colorful buildings as backdrops. Though I realized that I needed to check myself:

Though I was granted free access, this development isn’t even completely built, yet alone in operation. In fact, many of the shops were exhibits rather than actual businesses. The fact that this place is even open to the public at all is interesting, as there really isn’t anything but the husks of some European style buildings here yet. The place seemed like a colossal house show for the purpose of showing off the site to prospective home buyers rather than to attract visitors. When it comes down to it, Hallstatt, China is a housing development, not just a tourist attraction. 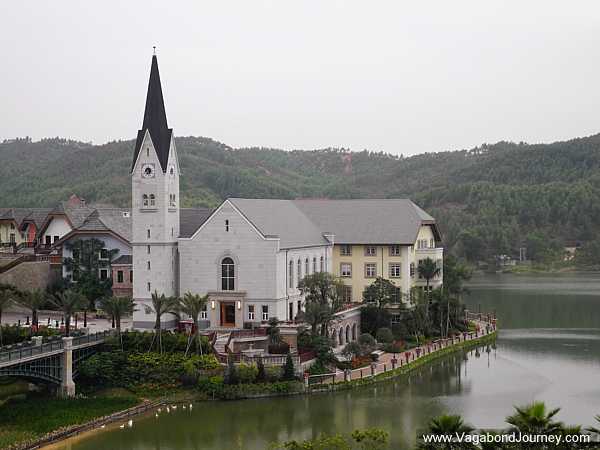 The masterfully replicated church of Hallstatt

But it is a housing development built in the middle of nowhere. It’s about an hour from Huizhou, a city that is firmly planted outside the gates of the massive Dongguan/ Guangzhou/ Shenzhen super-megalopolis, though it is readily accessible from this urban monstrosity by highway. The Hallstatt development sits at the edge of Boluo, a run down sort of place with a factory town feel. I would say that this town seemed forgotten about, but it’s not my impression that anyone ever had it in mind to being with. It’s the kind of place that you can ride through on a bus looking at everything but noticing nothing — Boluo is that run of the mill. But this has come to an end, as developers made it the site for their own little Europe. 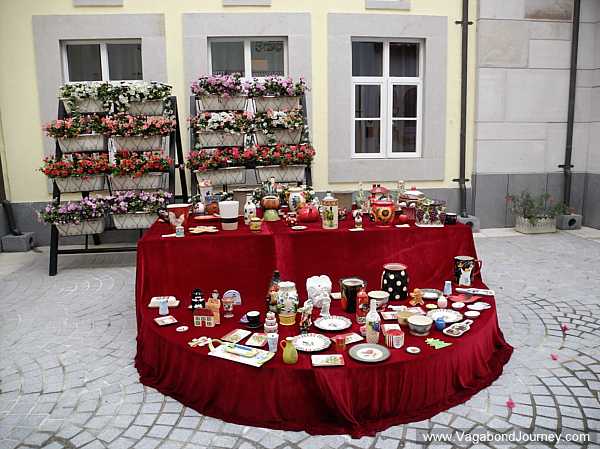 Hallstatt, Austria was not even a blip in the Chinese consciousness until relatively recently. In 2005, only 50 tourist from China were recording as visiting the village. But since then the place has taken on a sort of mythic quality for the Chinese. With an increased interest in Europe and old European styles, Hallstatt and its surrounding mountainous scenery, fresh air, bounteous nature, strict environmental laws, and a population committed to clean living became a metaphor for everything China isn’t. Chinese tourist very quickly began flocking to this alpine escape in droves.

Hallstatt the Second is an attempt to provide such an escape within the body of China. Its setting in the rural hills just outside of the largest urban landscape on the planet is no accident. If nothing else, Hallstatt, China is a reaction to the shear extremes of urbanization that the Chinese have surrounded themselves with — it’s an escape from the nightmare of their own making.

The corny European theme was not the reason for its creation — it’s just an external layer to make weekend expeditions from the city feel more complete. Although this is the first replica village to be created, Hallstatt the Second represents a broader movement of housing developments created in the rural peripheries of big cities for the urban rich looking for a place to take refuge. There is a growing demand in China for nature conscious, green, less-polluted, healthier environs. Hallstatt is a model for what this movement aspires to, so Hallstatt is what was built. 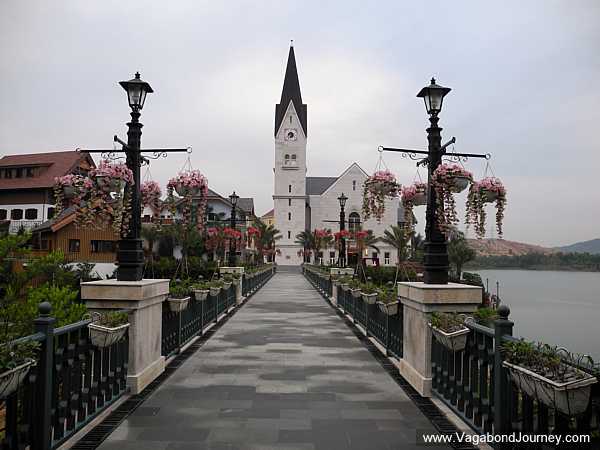 Although the exterior of the European mountain town was copied to precision, there was something deeper that could not be replicated. “It’s not another Hallstatt, to me. Hallstatt grew over hundreds of years, thousands of years. . . There’s so much history here that you cannot copy it,” the mayor of Austria’s Hallstatt was quoted as saying in a NY Times article.

This replica town had the look but not the essence of Hallstatt. It is the soul of a place  — that undefinable energy that feeds the imagination and stimulates the spirit —  which attracts people to it. It’s the way that you feel in a place that matters, everything else is just glam and glitter. Hallstatt, China feels as sterile as a stage set in a movie studio — which is pretty much exactly what it is.

I asked some of the nearby residents what they thought of the copycat development. A college student from Huizhou looked at me quizzically before replying, “If there is two of them it means that it is not so special.”

A portrait photographer working at the site was more forthright in his opinion. “What do you think of this place?” I asked him.

“It’s a fake,” he spoke boldly while curling his lip. “There are no people, there is no culture. It’s just a fake.” 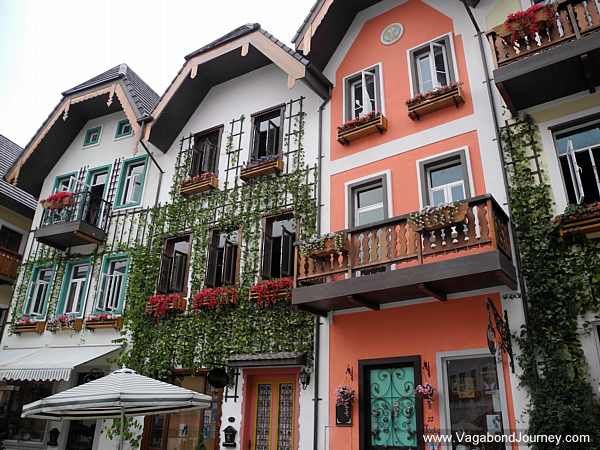 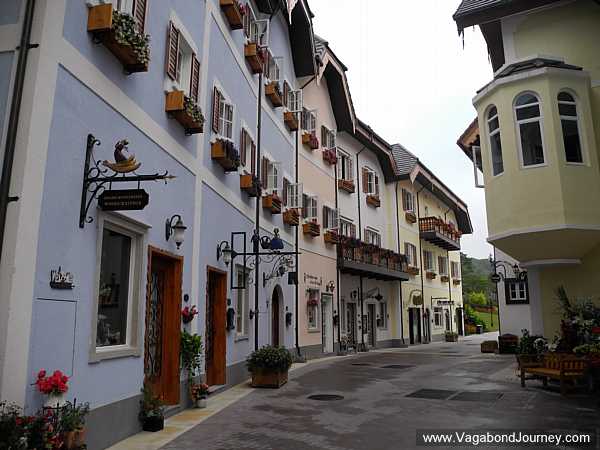 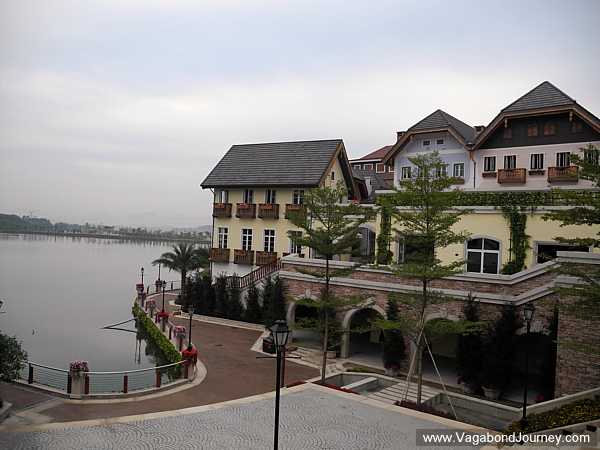 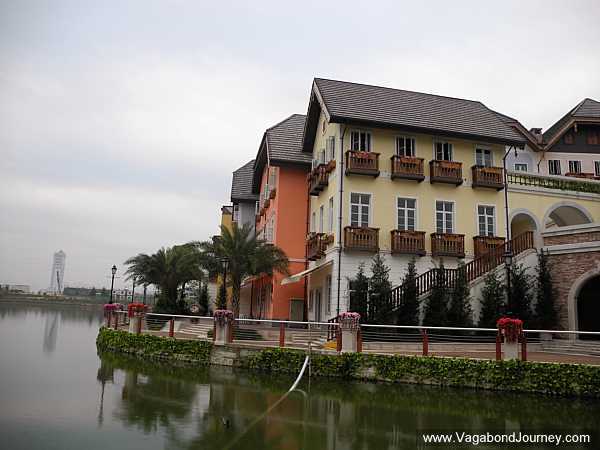 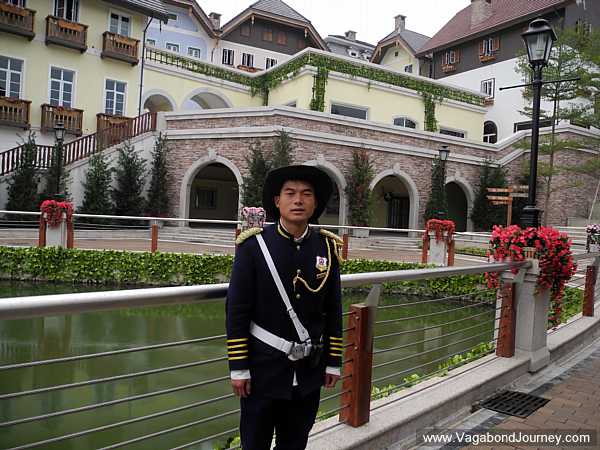 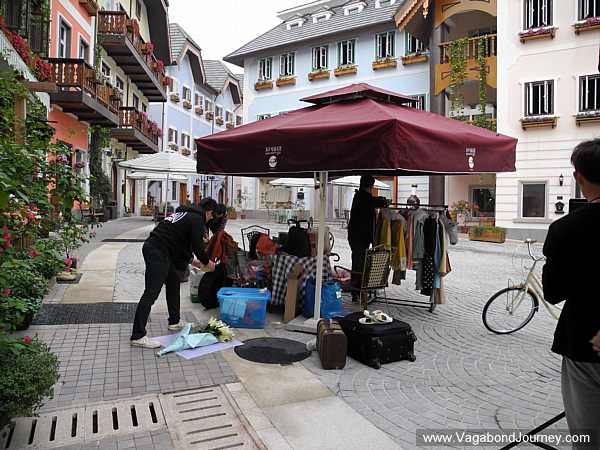 About the only thing that’s going on at Hallstatt, China is portrait photography. 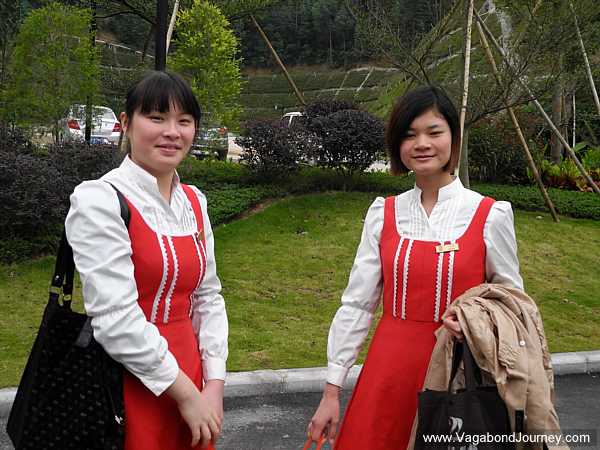 Employees at China’s Hallstatt dress up as part of the show. 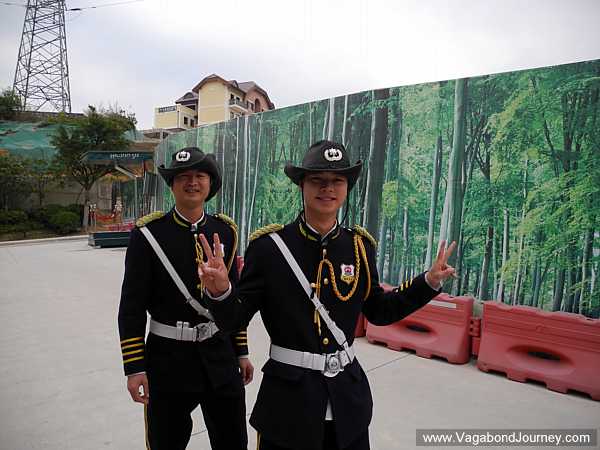 Security guards at China’s Hallstatt dress up as Austrian (?) soldiers.

« Christmas in China
China’s Knock-Off Cities and Western Architectural Copycatting, What Does This Mean? »