You are here :Home Articles Christmas in China

I found myself standing beneath a 40 foot Santa Claus puppet in the streets of Taizhou’s bar district. It was dancing Gangnam style. My wife was dressed like Snow White; my kid was dressed like one of Santa’s helpers; I had on some kind of strange black cape that the Chinese thought was Christmassy. There was also an international entertainment troupe who were wearing gold-sequin-plated Roman legionnaire costumes that had extravagant, golden angel wings attached to the backs. It was Christmas Eve in China.

My family and I were being paid $300 to walk in a parade as part of the supporting cast for the giant Santa. Apparently, our job was to look foreign and give our Western stamp of approval to this Chinese Christmas celebration.

Yes, they’re doing it right, people. We always walk through the streets with forty foot dancing Santa Claus puppets and an entourage of sequin-speckled pixies on Christmas Eve where we come from.

The giant Santa, which was attached to a fork lift that had a giant crane protruding from it, then began moving through the streets. It was a Godzilla scenario: the overgrown monster of Western cultural imperialism stomping through a crowd of squealing Asians. But in this version of the story the Asians tamed the raging beast and molded it into their own vision. Godzilla defected and now works for the Chinese. 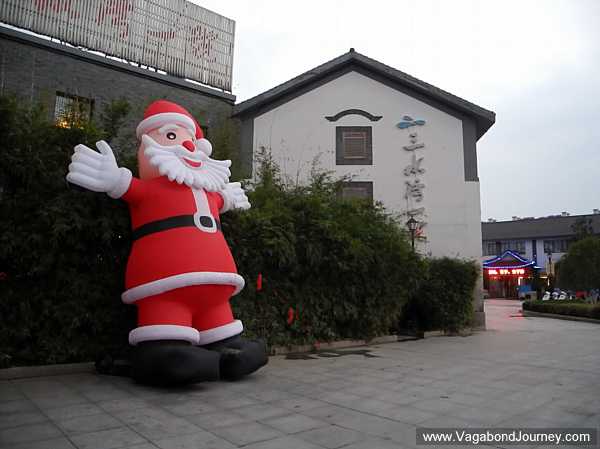 The parade was on. Thousands of Chinese people pushed and shoved to get to the front so they could get a picture of the white people in funny costumes prancing around the three story high Santa. My three year old daughter smiled and waved, the crowd freaked out with choruses of “Ke’ai! Ke’ai! How cute!” and went manic with photos. My kid gave them high-fives — she knows this performance well. I admired the complete and total strangeness: in a country where internationalization equates to status, atheists celebrate Christmas, communists go crazy with holiday shopping, and doing nothing more than being a white dude in the right place at the right time can be a job. 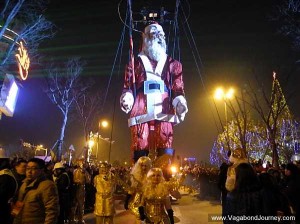 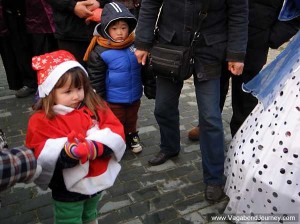 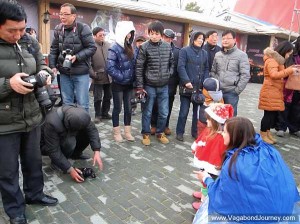 It initially seems beyond all sense that I would be writing an article entitled, “Christmas in China,” but this, as much as anything else, represents The New China. Scratch that, it represents the New Global Culture. In this context, an officially areligious country celebrates religious holidays if they are commercially viable and can be used as a crutch of status to separate the new, globalized generation from the old, traditional one — 70% of the Chinese who celebrate Christmas are under 38 years old.

There is no contradiction here: Christmas has been transformed into a secular celebration in Asia. Anybody in the world can now celebrate Christmas regardless of faith, culture, or country — and they do. Christmas is now a booming holiday in Japan, South Korea, etc . . . It seems strange. It makes little sense when looked at literally, but globalization has produced its own culture that’s engulfed the planet, and Christmas is one of the holidays that has been stripped down in essence, marked up in price tags, and included in the mix.  “Global culture” knows no religious lines, no cultural divisions, no borders that hem in the pursuit of profit.

In China, Christmas means one thing first: shopping. All the stores have major sales, and the public takes the bait. I don’t know if I’d ever been in shopping complexes more crowded than the ones I visited in the days leading up to Christmas here in Taizhou. It is widely touted that Christmas Eve is the best shopping day of the year in this country as far as sales are concerned, and this was completely evident.

I found myself part of a sea of shoppers as I made my way through the children’s section of a trendy department store on the day before Christmas Eve. People were pushing, kids were crying, one little boy was being spanked, a little girl was yelling for her mama, dragon ladies were barking orders to sales clerks, mothers were screaming at their children. Everybody was in everybody else’s way. A couple of young women elbowed me in the back and used me as a battering ram through the crowd that had plugged forward progress in front of me. I know this scene: it’s Christmas shopping. It almost made me feel nostalgic for home, but even in the USA holiday shopping generally doesn’t even get this intense. Even the Chinese — people who tend to feel comfortable in crowds — were losing their cool in ideal Christmas shopping fashion. At least they got this part of the holiday replicated to perfection.

Needless to say, the malls and department stores of China were complete pandemonium: 70% off sales are enough to make any free market population with disposable income freak out. I found a corner to hide in and shoot video of all these people rushing every which way trying to wrap their fingers around the best deals possible.

In a world where money represents the time it takes to earn it, there is something almost ritualistic about this carnage of consumption. It’s the trade of life/ time for things and the thrill of buying them. When these things are given as gifts they are more or less symbols of the time that it took the person to make the money required to buy them and the thought and effort needed to select them. Knowing this, I can’t stand on a pedestal of pretentiousness over the commercialism of Christmas, as it’s all just a symbol of something deeper and more genuine. 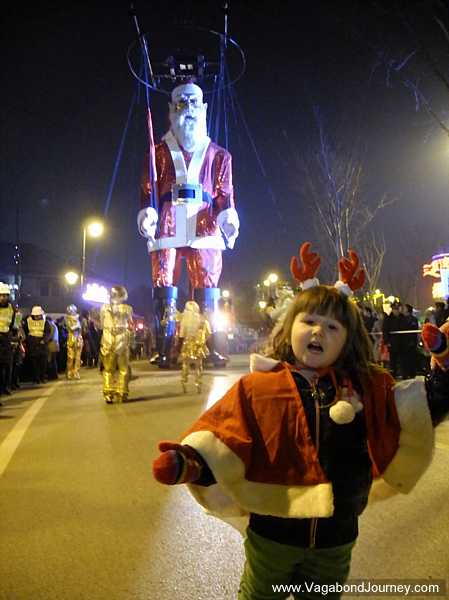 Though I’m not convinced that this was the sentiment I was seeing before me. To be honest, the frenzy seemed more to be one provoked by cheap stuff than by the desire to give gifts. Sure, some Chinese give each other small gifts on Christmas, but it’s not my impression that it compares to shear quantity of stuff they consume in the days leading up to it.

Beyond all the iconography, the songs, and shopping, Christmas is celebrated in China very much like a hyped-up and super-charged rendition of Valentines Day. Friends and family exchange small gifts, people go out and eat at restaurants on Christmas Eve, and special holiday food includes roasted goose as a stand-in for turkey. Christmas only started being celebrated here in the 1990s, and has grown in popularity in proportion to China’s increased position as a superpower of capitalism.

China has absorbed the external elements of Christmas, fashioned them to their liking, and made them their own. In perfect Chinese fashion they’ve extracted the elements and symbolism of Christmas that works with their culture and deftly left out the rest. The Christian roots to Chinese Christmas are nowhere to be found, but the outward manifestations of the holiday did not seem much different than they do in a Christian country.

The fact of the matter is that it’s becoming less common to see Nativity scenes with little baby Jesuses and wise men at shopping malls in the USA. No, you see Santa Claus, Christmas trees, and all that reindeer stuff. Many cities across the country have even banned the display of religious elements from Christmas displays on public property. As far as the public iconography of Christmas in the USA is concerned, it is my impression that it’s in the process of being cleansed of religiosity. So if a country that’s 76% Christian can publicly separate religion from Christmas how much easier this is for a nation of people who didn’t have this strong association to begin with.

The celebrating of Western holidays is part of the Chinese mission to internationalize. More than any other culture on the planet, China realizes that our world is global, and that they need to learn about, understand, and perform in places far beyond their borders. It is no secret that the first places in China permitted to trade with Western countries were the first ones to get enormously rich, and the “international = wealth and status” sentiment is still strong. The middle and upper classes go abroad for education and business, and it is a sign of class to be “international” and worldly. They’ve even shipped us tens of thousands of us Westerners in to teach our language, our culture, and to march down the street with a 40′ Santa Claus on Christmas Eve. This is not a matter of flattery, it’s a matter of cultural engineering: China has gone international. Christmas, Halloween, birthday parties, Valentines Day, etc . . . have been absorbed into the Chinese lexicon of celebrations as this country continues to master the world around it. In point, this culture is gripping the world by the cojones and is not letting go. 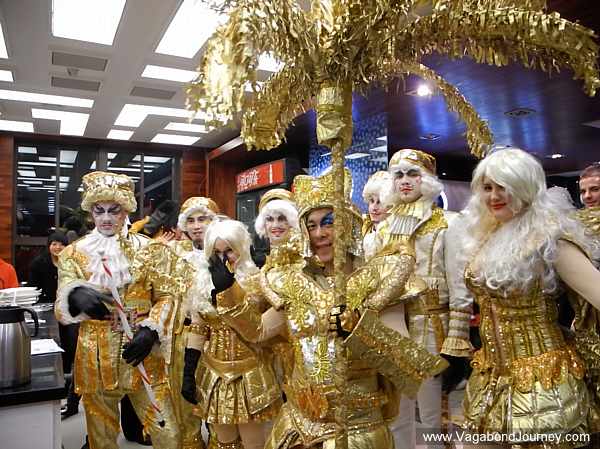 China is also prepared to invest heavily in these manifestations of internationalization as well. I don’t know who paid for the Christmas parade — if it was the bar area that it was held in or the city of Taizhou itself — but they dumped a large amount of cash into this show of Christmas. The founder of the performance troupe who built and brought the giant Santa told me how much he was being paid with no small amount of amazement: “We are getting paid 250,000 RMB for this.” $40,000 for a giant puppet, a curtain dancer, and a group of foreigners walking around in sequin costumes. He laughed with joy as told me that he had eight other troupes performing around the country on that same night. “The money is really incredible,” he said.

But there was a deeper irony to this story. There are about as many Chinese Christians in China as there are Communist Party members. They’ve been here for hundreds — if not thousands — of years. But “Christianity” for the majority of Chinese is still something Western and imported. Even though there are churches throughout the country, the homegrown Christians seem to confuse most Chinese — as though they represent something that’s inherently mutually exclusive and contradictory. What’s more is that true Christian practice for the Chinese is something that’s still regulated, and it is not uncommon to have to show a foreign passport to even enter a church. While Christianity is being tolerated more and more now, Chinese Christians are marginalized, not embraced, during their country’s portrayal of one of their holidays. Ironically, real Chinese Christians must apply for permits to go caroling or to stage any other public expression of Christmas.

It’s only the commercialized “Santa Claus and Reindeer,” religiously sanitized portrayal of Christmas that can be freely expressed and engaged in here, and the wide-scale appropriation of the holiday minimizes its deeper spiritual roots. The more China popularizes Christmas the less religious it becomes. In point, Christmas in China is another foreign “fun day,” outranking Valentines Day and Halloween only because the sales are better.

But is this really Christmas?

They had Christmas trees, Christmas music, Santa Claus, snowmen, reindeer, decorations, lights, pointy red hats, shopping, presents, parties, a big meal with friends and family, but was there something missing?

This Christmas season the Chinese press patted itself on the back by saying that China is the reason why the USA has Christmas, and we should be thankful to China for manufacturing many of the gifts that we purchase. But they seem to have no clue what Christmas really is. Christmas is not about the “made in China” junk we wrap and throw under the tree. Christmas is about family and friends and faith. We give gifts as physical manifestations of deeper feelings, but they are a mere accessory tacked on to the exterior of the holiday.

Like with so many other Western appropriations, China is able to replicate the exterior with precision while completely missing the soul of what’s inside. The Chinese can go through the motions of Christmas, but this doesn’t mean they get it. Christmas here is just another Chinese knock-off of the real thing.

« Religion in Kinmen, Taiwan
A Visit to Hallstatt, China: An Austrian Village Cloned »