You are here :Home Architecture China’s Knock-Off Cities and Western Architectural Copycatting, What Does This Mean?

China has perhaps always had a penchant for replicating the architecture of other powerful cultures through the ages. From the Qin Dynasty building copies of the great architectural achievements of their vanquished foes to the Qianlong Emperor of the Qing Dynasty constructing a massive European palace to the Republic era where the colonial style of building remained in vogue, China has always had a taste for the architecture of other cultures. This is especially true today as traditional British, German, Italian, and American architecture is being replicated on the other side of the world.

Traditional Western styles of architecture have swept across China like a typhoon. Full scale European style towns are popping up across the country, there is a clone of an entire Austrian village in Guangdong province, and there is a plan in the works to replicate Manhattan in Tianjin. In addition to this, there are at least a half dozen buildings that mimic the White House, multiple Eiffel Towers, a copy of the Château de Maisons-Laffitte, a few Arc de Triomphes, a miniature replica of the Sydney Opera House, and the old-world Western style facade has been stamped onto literally tens of thousands of prominent building. The copycatting of grandiose Western architecture has become so common here that it could almost be considered one of the styles of The New China. The Chinese have appropriated these traditional styles of architecture, adapted them to the modern era, claimed them for themselves, and use them for their own monumentality. 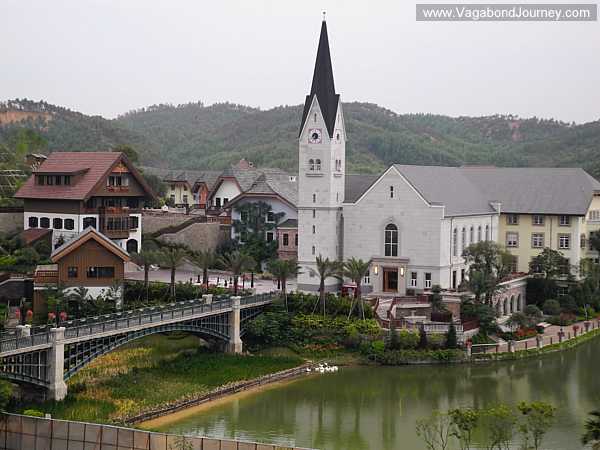 Appropriating the architectural styles and copying the great buildings of their political rivals is China’s way of saying veni, vidi, vici: I came, I saw, I conquered. This culture is carnivorous, it eats elements of other cultures as a way of demonstrating its power. These architectural replicas and appropriations are trophies.

By appropriating the monumental trappings of power from distant places and times, the Chinese do not merely place their own country on a symbolic par with historical Western superpowers, but suggest that China has mastered and transcended their levels of achievement. – China’s Copycat Cities

It is not my impression that this architectural copycatting is a sign of self-colonization or a lack of creativity, as it is sometimes passed off as, but is a symbol of China stepping out on the global gridiron and demolishing its opponents. 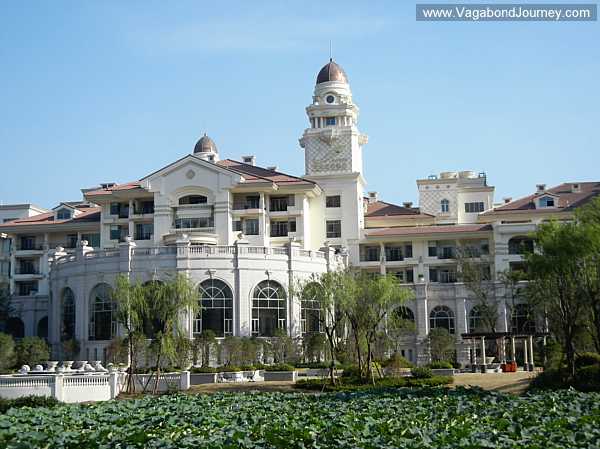 A gigantic Western style building outside of Taizhou, Jiangsu province.

In the Chinese paradox, to replicate something is to dominate it. To take the great architectural achievements of powerful cultures past and present and copy them is to marginalize their original creators. It’s a way of saying, see, they’re not so great after all — or, perhaps more accurately, we’re just as powerful as they are. It is sort of like how eating the testicles of a tiger or a donkey’s penis are thought to give virility, the consumption of foreign architectural masterpieces likewise impart their power to the replicator.

How can the White House be so great when the city of Wuxi has three of them? How can anyone feel awe at Halderstatt, Austria when it’s been exactly replicated in Boluo? How can anyone think the Eiffel Tower is anything to fuss over when China has a half dozen of them? How can the business district of Manhattan be impressive when China built it even bigger? This copying is not meant to be flattering, but belittling. It’s a symbolic conquering.

Whereas in the West imitation is an indication of deference, a sign of submission, in China it shows mastery and dominance. Replication shows that the rudiments of something are understood, to take something apart and reassemble it is the best way to learn how something works. Western technology, language, architecture, food, holidays, culture, etc . . . are being consumed, reproduced, and proliferated in China. It is not my impression that this is to say that they’re bowing down to our lead, it’s to say that they have us mastered. 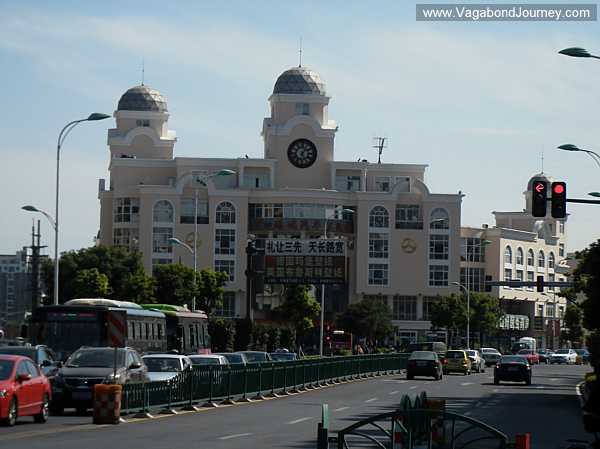 We may look at China and call them a bunch of creativity deficient copycats, but when we look closer at what they are doing we see that they are advancing on things that the West has left dormant for many years. They are clearly not just replicating blindly, they are adding to the designs, improving them, and making them their own. China now has a handle on both types of mastery: replication and innovation.

This process has led to China being able to sneak up behind their geopolitical rivals and very quickly move past them. Where trains are thought of as an old technology in the USA, the Chinese mastered this form of transportation, and they have the fastest train on the planet and the greatest network of high-speed rail lines that the world has ever known. The same goes for manufacturing, trade, projecting global political influence, and many other criteria where the West was once firmly in the lead. The Chinese have mastered many of the models set forth by the other foreign powers, and have made them their own.

Architecture as Status Symbol and Aesthetics

But there is something else to this architectural copycatting that is perhaps more obvious: there is no style of architecture that shows power and status more boldly and clearly as Europe’s traditional styles. It is clear that simple aesthetics play a role here.

Something about this style of architecture which just shows status. From Greek and Roman times, through the glory days of European empires and the foundation period of the United States  up to today, mighty stone facades, pillars, big brass domes, and prominently carved decorations mean one thing: power. Meek people don’t live and work within such grandiose structures, people don’t put this much time, energy, and money into building them for unimportant places. 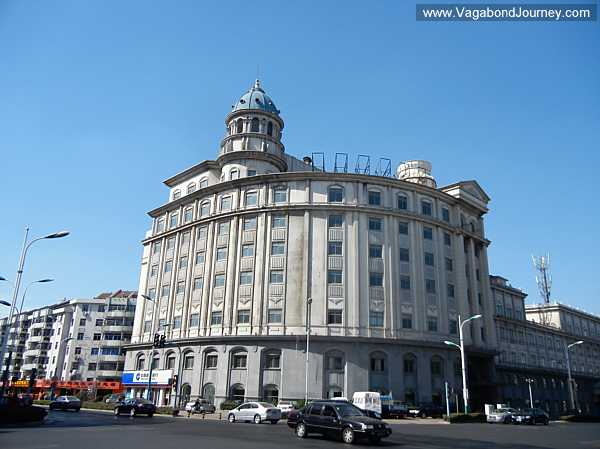 There is another theory here as to why the modern Chinese are choosing to build their prominent buildings and upper class housing developments in the Western style, and that’s the fact that there is an architectural status vacuum in this culture. This is a culture where the traditional ways of showing status architecturally are no longer applicable, as they are the styles of the dynastic periods and are taboo or just plan corny to replicate today. This country also went through a period where socialism sought to remove signs of architectural status. When China opened up and the money began flowing in the vacuum of how to show off this new wealth was filled with Western style status symbols. Fast forward a couple of decades and these Western styles equate more to status than anything to do with the West itself.

There is also a direct connection between wealth/ status and international connections. In point, it was the first areas of China to open up internationally that were the first to economically flourish, and the reason why the country has risen to such great heights is because of it’s role in international trade. The upper classes of the country often receive their higher education in the UK and USA, and many bring back elements of these country’s styles back with them to China. Things that are associated with the West (the West, in this case, generally means international) hold status in China. This, again, is perhaps not because they hold these cultures in particularly high esteem but because they represent the “globalism” that is a symbol of status in this culture. In this context, occidentalism — the romanticizing of Europe and the USA — equates to “international,” which then equates to status. In this context, it is clear why the old, story-book style replicas of European architecture has become prominent across China. 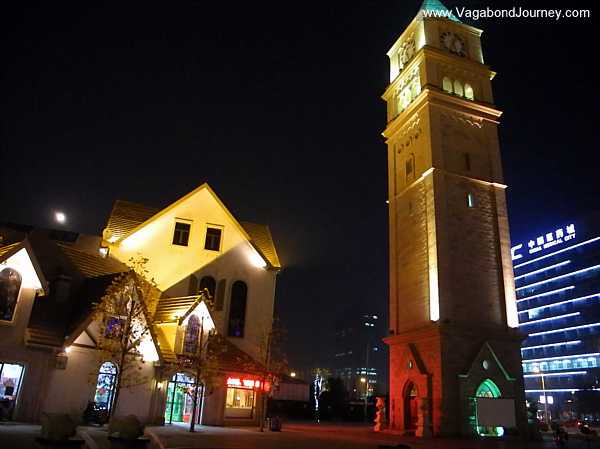 This is a country starving to show its status, a culture bent on building monuments to itself. This is a culture with something to prove, a great culture that is perhaps insecure about its greatness. The Chinese are experimenting with various architectural styles across the board. It’s not only the old Western styles that are being tried out, but countless others as well. This is a country that’s building the tallest skyscrapers, a country that’s not afraid to construct experimental, futuristic, and downright strange buildings (like the big boxer shorts).  In this context, it’s hardly out of the ordinary that Western architecture styles that have not been used in a century are being revived, that entire cities are being build to look like those from another country, and buildings that show status in other cultures are being replicated. The modern architectural landscape in China is, simply put, surreal. There is no order to it, developers are throwing up monumental works in styles from the past, the future, the West, the East, and everywhere in between. This architectural mish-mash, replication, innovation, and experimentation, perhaps more than anything else, is a symbol for what China has aspired to. 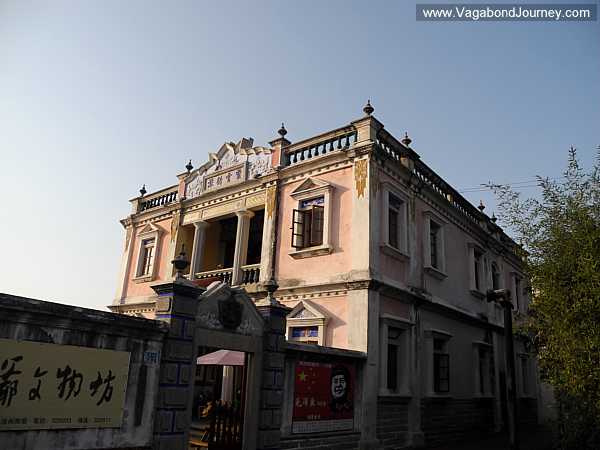 An older example of the Chinese copying Western styles of architecture. This building is on Kinmen Island, and was built in the 1920s. 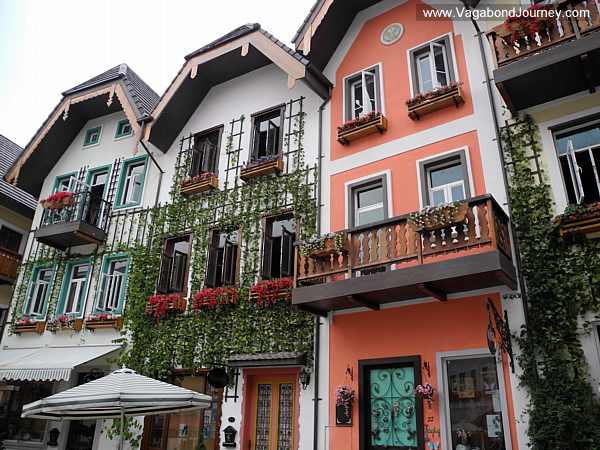 Hallstatt, a village in Austria, is completely replicated in China’s Guangdong province. 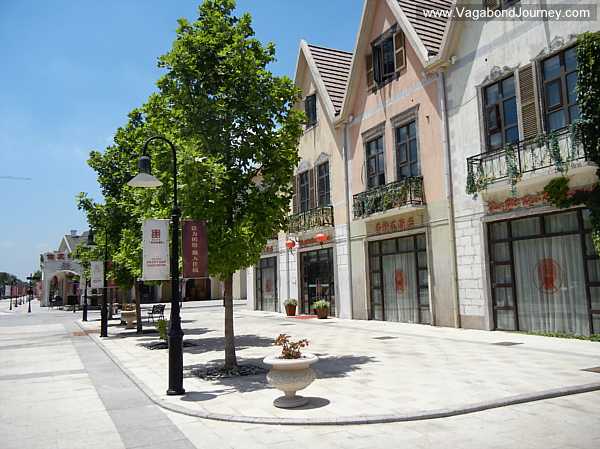