You are here :Home China China, Taiwan One Country Two Governments is Happening

Two giant signs separate the two Chinas. Or, more precisely, the two governments of the one China. One is on Xiamen Island, PRC, the other on an island of Kinmen, ROC. This was the final standoff of the Chinese Civil War. Chiang Kai-shek and the nationalist government were booted out of Beijing and they retreated to Taiwan and a few islands off the coast of Fujian Province. There the struggle came to a stalemate — which has remained in effect to this day.

Though neither government is willing to admit defeat — they both claim to be the legitimate government of all of China. Though a battle has not been fought in the 5,000 meter span of water that separates the two sides in a long time, no more shells are being fired from one island to the other, no more frogmen are swimming across the narrow waters to wreak havoc under the cover of night, many of the ramparts and bunkers that once lined both coasts have either been removed, are crumbling to ruins, or have been turned into tourist sites. But two final statements of this civil war remain. 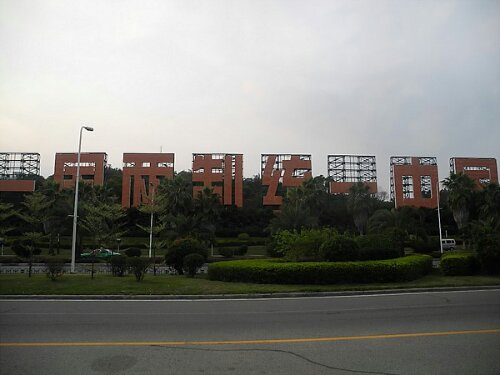 On the China side is a row of giant red characters which say 一国两制统一中国. One country, two systems, reunite China. They stand thirty feet in the air, are made of steel, and are clearly visible from the Taiwan side with a pair of binoculars. 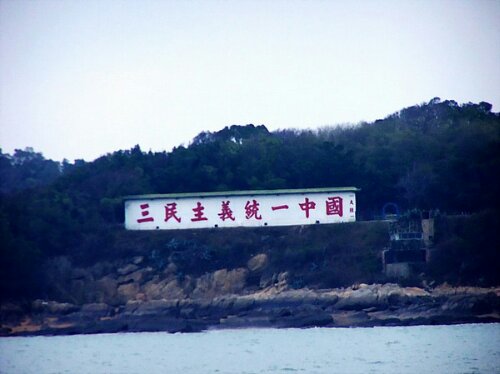 While on Dadan Island on the Taiwan side are bright red characters painted on the side of a concrete wall which say 三民主义统一中国. The three principles of the people unite China, a political philosophy of Sun Yat-sen. It too, can easily be seen from across the narrow strait, and has the additional advantage of being strategically positioned on the path of the ferry from Xiamen to Kinmen, apparently so riders can have a little reading material as they float past.

These signs are a couple of the remaining relics of the Chinese Civil War, a conflict that went from being incredibly bloody to overtly propagandic before fizzling into history. There are museums and tourist sites about it now, people talk about it as though it was something that happened, not something that has continued. Chinese from both sides of the line now cross to the other and look at exhibits of the war as seen from the perspective of the enemy. They can look through the giant binoculars that the soldiers once used to monitor the opposing shore and they laugh when they spot familiar landmarks. Kinmen even removed references to the mainland Chinese as “communist bastards” in their museums, and relics of the war have become an intrigue of history.

Though the signs remain. They say roughly the same thing: that both sides want a unified China. And they seem to be getting what they want — though it’s happening through a force that’s far stronger than propaganda and political ideology. Commerce is bringing the islands on both sides of the strait together again. Chinese engineers are assisting their Taiwanese neighbors with building a bridge that will have the largest spanning arch in the world between Greater and Lesser Kinmen Islands, multiple central business districts, free trade zones, and special economic corridors are popping up along the coast of the mainland just to encourage trade between Taiwan and China, Shanghai is building a “Little Taipei” Taiwan themed new area, and cross-straits trade shows, meet ups, swimming contests, etc . . . have become an almost everyday occurrence. China seems to be pushing this cohesion, and Taiwan seems to be following along in a “Hey, why not?” sort of fashion. Why wouldn’t they? It makes them a lot of money.

These Chinese have this government and those Chinese have that government. It’s the kind of arrangement that can only make sense in East Asia. Mainland Chinese go to Taiwan freely and Taiwanese go to the mainland freely. The coast of Fujian Province and Shanghai are packed with people from Taiwan; Taipei is packed with people from the mainland. Gradually, the barriers are dissolving, and more and more the people from both sides are treating the terrain of the contending government as their own.

This is happening incredibly quickly. When I first started coming to China there were no direct flights between the mainland and Taiwan, you had to transfer in Hong Kong first. It’s hardly even been a decade since residents of opposite sides of the line were again permitted to cross between Xiamen and Kinmen. Now there is an entire luxury housing complex going up on the coast of Xiamen marketed directly to the Taiwanese. It’s called the “Straits International Community,” of course.

The one country, two governments solution is something that is happening.

“I think things are good how they are,” I’ve been told by multiple Taiwanese businessmen. And why wouldn’t they? They get the freedoms of Taiwan and the riches of the mainland. Living in the geo-political grey, in a country that’s not officially recognized by most of the world, seems to be the only expense.

The showdown of signage between Xiamen and Kinmen is something nostalgic, and that’s about it. Its significance seems to be something akin to a moderately amusing roadside attraction. What value is a propaganda sign urging a “one country, two systems” style reunification of China when the real thing is happening right next to it in a new CBD full of skyscrapers built especially for cross-straits trade? These signs are simply one of the last vestiges of a civil war that sent two contending political systems opposite ways just to eventually find each other traveling down the same road.

« The Story of Ordos Kangbashi, China’s Most Famous Ghost City
Cosplay in China »