You are here :Home Articles Can Chinese Shopping Malls Become Centers of Culture?

Imagine if you didn’t just go to the mall to shop. Imagine if shopping malls were places full of museum-like exhibits, performances, cultural shows, and places were various groups from the surrounding communities joined together to interact and engage in public discourse. Imagine if malls were cultural centers . . .

Imagine if the shopping mall was the only place available for all of the above.

That’s quickly becoming the present reality in the New China.

No place in the world that has more than one human is a cultural dead zone, but what I was looking at was probably the closest thing to one that I could imagine. An old Chinese fishing village was swept off the face of the earth and a Wanda Plaza was put in its place. Thickets of new high-rise apartments were sprouting up around the mall like palisades. And that was about it. There was a mall, a few high-rise complexes, nothing more. A few intersections down the highway the same scene repeated itself — then again, and again, and again all the way across the belt line of Xiamen island. 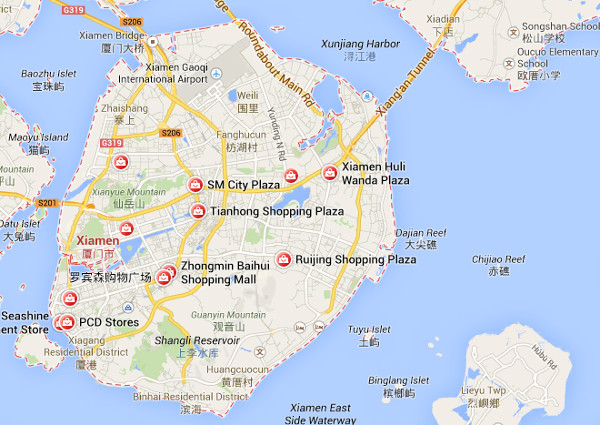 The new Chinese city, meaning areas that have been redeveloped within the past decade or so, is essentially a network of shopping malls surrounded by a patch of high-rise apartment blocks that are strung together by highways.

The shopping mall is not only the center of commerce in these places, but the center of recreation, social life, art, culture — everything — as well. You buy your clothes and food there, you go out with friends there, you have your dinner there, you watch your kid perform on stage there, you see a movie there, you sit around in Starbucks there, you get drunk in bars there. There is pretty much nothing else to do in these redeveloped zones that doesn’t consist of going to the mall, there is all too often little else around. So everybody follows suite, everybody goes to the mall. It’s what people who live in these places do for fun . . . it’s what they seem to do for everything.

These malls have a virtual commercial monopoly over the neighborhoods they serve. In China, there is no separation between commercial and residential zones, and many malls actually have their own apartment towers rising up out of their roofs and/ or their own complexes positioned around their periphery in self-contained retail/ residential combos. Invariably, outside of this inner zone there will be another ring of housing developments which complete the mall-centered urban cluster. The concept of the captive commercial audience is taken to the extreme here. 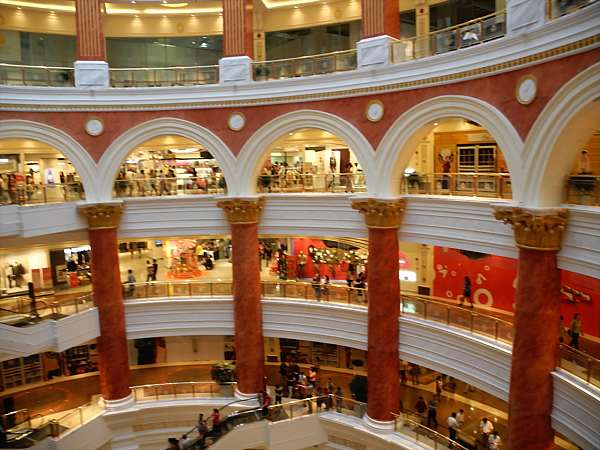 In some ways this development scheme makes sense, as it’s foolish to build a residential area without a commercial zone to support it, and vice versa, but in other ways it’s rapidly whitewashing the urban landscape and permanently altering the culture.

By next year there will be over 4,000 shopping malls in China. Since the 2009 financial downturn the Chinese economy has turned inward. The realization that the export market had gotten a lot smaller made domestic retail sales the new frontier. China has never done anything half-ass, and keeping with this ancient trend the country intensified its mall building to almost insane proportions. Over 40 million square meters of mall space is under construction throughout the country — which is more than half the total mall building currently underway on the planet. Malls are viewed by municipalities as cash cows, as the land can first be sold to developers, and taxes levied thereafter. Malls also boost a city’s “modern” image, and having the largest, widest, most innovative and futuristic shopping malls is part of the ongoing competition between municipalities — of course. 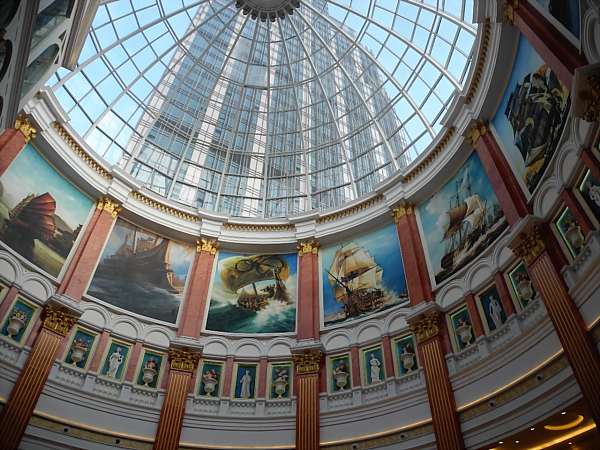 The real problem with this is that it only takes Chinese developers roughly five years to build a mall, from site selection to the completed project. Moving at such great speed means that the physical and social landscape of massive stretches of the country can be completely rearranged without knowledge of the future impact that it could have.

And when you’re dealing with development on this scale, there is no going back.

It’s jaw dropping to observe the degree to which this country has placed the shopping mall at the center of its cultural menagerie. The old villages and neighborhoods are being demolished at a pace that’s too fast to even measure or comprehend, and the old, close knit communities that once inhabited them are being eradicated as well. The substitution for this is often a mall.

As shopping complexes move deeper and deeper into their roles as community centers they are starting to respond to the role they’ve claimed for themselves. 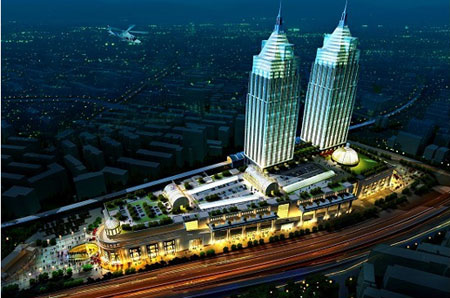 Shanghai’s Global Harbor mall in designed to look like a giant sailing ship. It has Baroque style domes, Corinthian columns, 1,200 square meters of frescoes, murals everywhere, a rooftop garden sporting Renaissance and Victorian styles, and two skyscrapers sticking out of the top like “sails.” It is Shanghai’s largest mall, tallying 480,000 square meters of interior space divided between six levels which contain restaurants, supermarkets, gyms, spas, an ice rink, a movie theater, foreign bookstores, a children’s playground, and trees and other foliage spread all over the place. It is a grade A, uber-modern, trend setting colossus of shopping that has just about everything.

Though it is also something else. The place has been dubbed a “commercial-tourism-culture integrated center,” and is an experiment that could prove to be the future of shopping malls in China. Rather than just being a place to shop, it’s supposed to be a place to “live.” The Global Harbor mall has designated 20% of its retail space to cultural pursuits and exhibits. The entire forth floor is made up of art galleries, exhibition spaces, a children’s art museum, folk music stores, and spaces for the performing arts. This mall is trying to become a one stop shop for everything urbane, a place that takes the idea of high-society further than labels on handbags and the tag on pants. Of course, it’s a marketing tactic, but it’s one that’s attempting to fill a role that has been left vacant by the mall-ification of the surrounding community.

Malls are no longer just places to shop but are places to “be.” 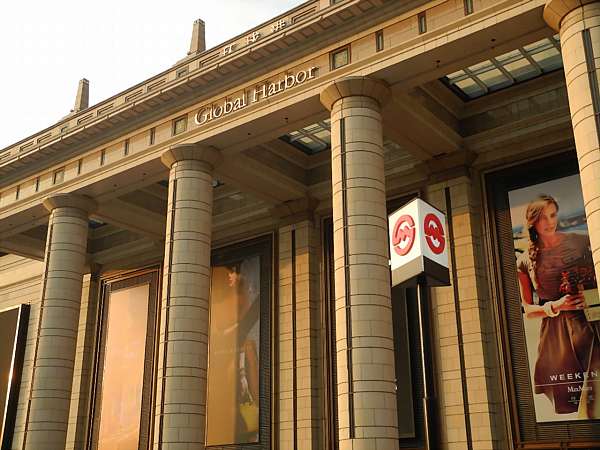 This seems to be a trend that many malls in China are shooting for, some even going as far as to call themselves “lifestyle centers.” While I don’t know of any that can top Global Harbor for luxury or excess on the “cultural” front, there is a general movement towards making shopping malls into complete cultural epicenters, full of things to do and see rather than just places to shop. When you walk through them there are often little events going on everywhere: little kid dance shows, beauty pageants, music performances, car shows, singing competitions, sometimes even free movies projected onto screens. Even run of the mill Wanda Plazas will often have a variety of areas set aside specifically for public performances, as Chinese shopping malls claim their position as the country’s new social forums. 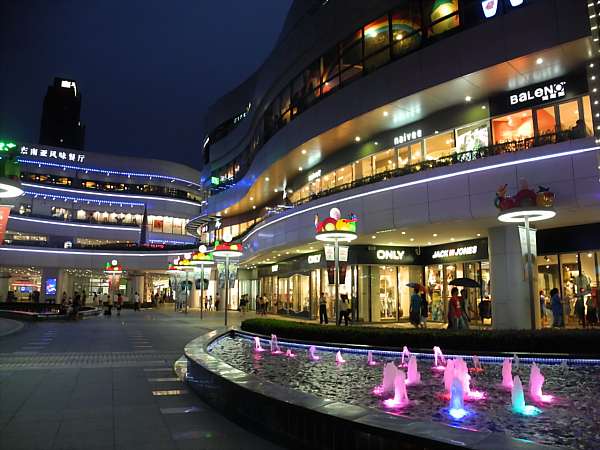 Malls were first shopping centers, then they became shopping/ entertainment centers, now in China they have become defacto cultural centers. They are the centerpieces of their communities, the heartbeat of the culture that surrounds them. I expect this trend will only advance as we forget what life here was like before mall-ification, and these shopping malls will seem as if they were always just here and there was never anything else.

“People now can buy almost anything online. What we can do is to make our mall a ‘meeting place’ and give them good reasons to come.” -John Tegner, Ikea Centre Group managing director

Video of the Global Harbor mall