You are here :Home Art and Music Carving into the Ancient: Woodcarvers in India

JAIPUR, India- I was picked up in the morning at the front gate of the Rajasthan Hotel by the master wood carver, Umesh Singh, and we rode off on his motorcycle through the busy streets of Jaipur. As we criss-crossed lanes of exhaust spewing traffic, dodged holy cows, honked at broken down beggars, and plowed through ladies awash in a kaleidoscope of colorful saris, I held on tightly to the back seat of the rumbling motorbike. Before take off, Umesh smacked an orange plastic construction worker’s helmet down upon my head in a half hearted jest at “protection.” I held on to the back of his motorcycle for life and limb, and could only pray that I was not going to be cast upon the streets of India and turned into something resembling the chickpea masala that I ate for breakfast. 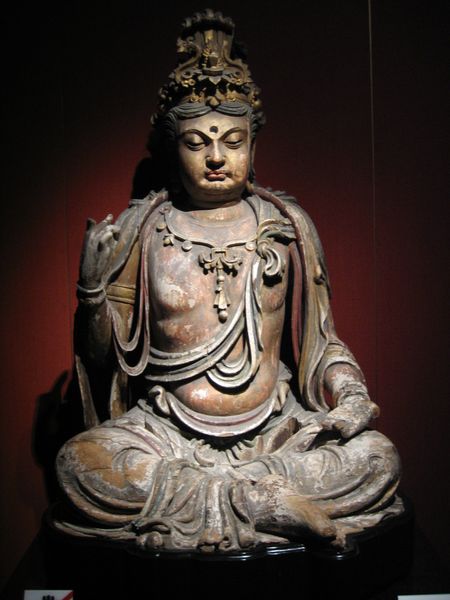 Umesh is a traditional Indian wood carver who makes his living from carving and selling little statuettes and motifs of Asian spiritual figures- like Buddha, Krishna, Shiva, Lao-zi – and the animals that once roamed the jungles of India freely before they were all eaten by the Moguls and hung on plaques by the British. I remember Umesh as a very stoic and proud man, who carried himself with that particular authority of a man who knows he has perfected his craft. I had met him the day before as he sat behind his little army of sandalwood carvings at a booth in the traditional arts market of the City Palace of Jaipur. As I looked over his wares, we quickly moved into a friendly conversation, and I asked if I could write an article about him and the life of a traditional wood carver in modern India. He quickly obliged me with a bobble of his head and invited me to be a guest in his home the following day.

I was very curious to learn if the contemporary Indian craftsman continues to utilize the riches of ancient tradition and folk-knowledge that he has at his disposal, or if his art has been perverted by the impervious weight of modernization and tourism. I hoped that this meeting with Umesh would resolve some of my questions.

After the white knuckled motorcycle journey across Jaipur, we arrived at Umesh’s family home. He lived in a modest, run down building that was directly connected to a plethora of other organically stuck together households that are the hallmark of Rajasthan architecture. In fact, the entire neighborhood seemed to be pasted together in some kind of ancient urban planning scheme, and there was no telling where one family’s home ended and another began, and, as I walked through the doors, I felt as if I slipped into some sort of human co-opted ant colony.

I was then taken into the home’s inner courtyard, and was directed towards a little chair that was set up next to a rug and some carving tools on the floor. The walls of the house shot up from the floors at obtuse angles and had torn out pictures of Indian gods and goddesses hanging cockeyed from thumbtacks all over them. Nearly every inch of wall space would have been really grateful for yet another fresh coat of green pastel paint. Umesh’s home was in a state of satisfied, comfortable neglect, as it had probably been for centuries.

I sat in the chair, which was kind of awkwardly placed in the room for my benefit alone, as everyone else just sat on the floor. The room quickly filled with people who came to meet the foreigner who was now in their home. A mother, a nice, a brother, a father, Umesh, his brother, and some unclaimed little rascal were all inspecting me from every direction and chattering amongst themselves about their respective findings. I was beginning to feel like some sort of incompetent boy-king sitting on a foldout chair of a throne as I look down upon the heads of people who I did not know, speaking a language that I could not understand, in a land that stretched beyond my imagination.

Umesh soon walked over to me and sat cross-legged upon a blanket that was laid near a couple of well worn and dirty tool boxes. He was ready to begin giving me a lesson in sandalwood carving and, after opening the tool boxes, removed a handful of elongated metal tools. He then inspected each of them intensely before handing them over to me one at a time. The tools consisted of steel rods of various sizes and shapes that had sharpened blades sticking out of each end. He also displayed chisels of various sizes, files, drills, and the collection of sandpaper that he uses to scrape and carve the blocks of wood that he transforms into beautiful statuettes. These were the tools of the Indian sandalwood carver.

He then gave me a lesson on the types of woods that he shapes his creations from. Umesh placed specimens of teak and ebony into my hands for me to feel and look over, but it was sandalwood that was the prize material of his trade. Umesh then made sure that I understood the superiority of the sandalwood over that of teak or ebony, as it was this wood that gave his art its fame throughout India. He pulled out a half finished sandalwood tiger figurine from a bag and instructed me to smell it. I did, it had a sharp and musky fragrance.

“This smells like incense,” I spoke, as Umesh smiled.

“Yes, like incense,” he repeated after me with excitement in his eyes.

Umesh then began working as I sat in the chair and just watched him scrap away at a chunk of sandalwood. He shaved off pieces here, pieces there, with controlled and precise strokes of a steel file. His movements were exact and done with complete confidence. He had been carving since he was a small child and it was evident that he knew each move that he made from deep down in his being. He had probably carved the same piece that he was making before me hundreds of times before and its blueprints seemed to be indelibly etched into his psyche.

Carving was Umesh’s family trade: his father was a carver as was his father before him. He told me a story of how, when his father was a young carving man, he would walk down the street covered in sandalwood dust and everyone would be able to smell him coming from far away. Umesh then pushed together a little pile of sandalwood dust and put it in my hand. “Smell, smell,” he said. I did so. “Good smell,” he spoke with a smile, relishing in his family’s history and the pure joy of his craft.

Umesh continued working on a figure that he was shaping into a Bengali tiger until his father walked into the house. I was promptly introduced to him and we shook hands. Umesh had to return to the family’s booth at the market, and I was left with his father, who was the master carver of the family. His name was Shyam Singh and, like his son, he was also taught the carving trade from his father and had been making sandalwood handicrafts since he was a small child. 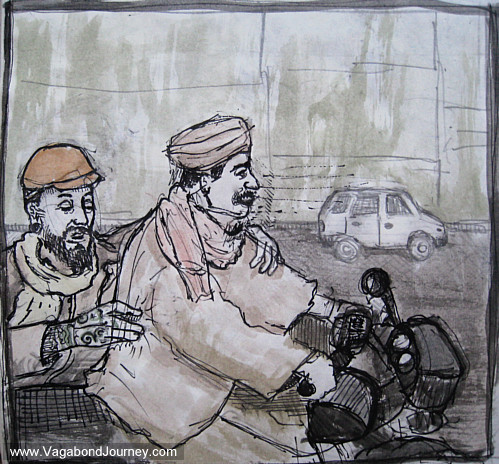 Shyam took his son’s place on the work blanket and promptly began carving out little animal decorations on a pre-sculpted figure. I, again, just sat silently and watched. I was transfixed by the movements of his hands as he cut through the wood as if it were butter. He worked with as much precision as his son, but he also held an incredible amount of absolute confidence in each stroke of his blade. He seemed to be a part of the woodblock that he was carving and he worked with meditative concentration for more than an hour without a pause in his rhythm. He would occasionally show me his progress and I would reach out and touch the figure, wipe the fresh dust from it, nod, smell the dust, smile, and then hand it back to him to carve a little more. The carving process was almost unbelievably time-consuming, and two hours of solid work, the piece was scarcely any nearer to completion than when he began. 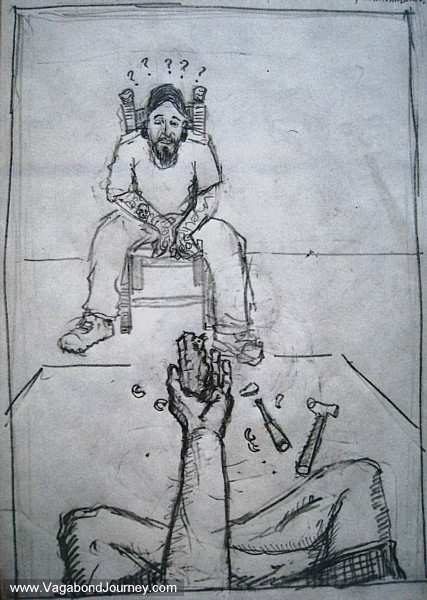 Curiosity soon struck me as I picked up a piece of sandalwood scrap and a blade and tried to carve something into it. I was surprised by how much strength it took to even get the blade to bite into the wood, and I could not even make the simplest cut with the slightest degree of precision. I laughed at myself and Shyam also giggled at my feeble attempts. I knew then that wood carving is an art takes many years of constant practice and patience to learn, and a lifetime to perfect.

Umesh and his father were living examples of proud craftsman out of a history book; relics of what humans were once capable of. I was in the shear presence of an ancient tradition as I watched these craftsmen perform their ambulations upon little chunks of sandalwood. I truly felt, in those hours of silent carving, that there is nothing in the world more honest than a craftsman’s working hands. My cynicism had completely dissipated, as I learned that a large degree of the traditional artistic spirit has survived the influx of modern triviality in the art of sandalwood carving. But it will probably not endure. In the presence of Umesh and Shayam Singh, I sadly knew that I was witnessing the last residual breaths of this ancient Indian tradition. Umesh’s children will not carry on the family trade, and he knows that the chain of folk knowledge will end with him. His family’s livelihood and tradition will not be linked into the future.

“There is not enough money in wood carving,” Umesh told me sadly, as he explained why his children have no interest in working sandalwood.

This is the story of our monetarily driven times: there is no longer any space for tradition, patience, and heartfelt handiwork. We now live in a world where price-tags determine value and money directs the course of our attention. No longer will we know the mastery of Umesh and Shayam Singh: goodbye ancient Indian craftsmen, goodbye.

« One Motorcycle, One Man, One Long Journey
Hasankeyf – Another Ancient City to be Destroyed »