You are here :Home China Absurd Racism Claim And Attacks On Chinese Culture

This year’s Sports Illustrated swimsuit issue was photographed internationally in eight locals and included local flavor of each local. As such, it has been accused of racism by some notable bloggers, and the story has spread into mainstream media outlets.

The claims of racism go to such absurd lengths as to actually denigrate minority culture in China. Jessica Gomes was photographed standing with some members of a minority ethnic group in Guilin wearing traditional attire. Anne V was photographed on a raft on the Li River guided by a Chinese person.

Dodai Stewart at Jezebel thinks that the Chinese people look “quaint, backward and impoverished.” By included photos of minorities in their traditional attire or of raft guides, they “cement(ing) stereotypes, perpetuat(ing) an imbalance in the power dynamic.” Why didn’t China include some of the skyscrapers and “modern cities that make New York look rickety” where ancient hutongs are being knocked down to make way for restaurant and bar streets?

For Stewart’s argument to make sense, you have to make a terribly closed-minded value judgment on the relative value of minority traditions versus modernization. The photos can only be viewed as racist if they are portraying one race in a negative light in comparison to the model. How is it that the local Guilin people are being harmfully misrepresented wearing the same clothing that they have worn for hundreds of years and still wear today? 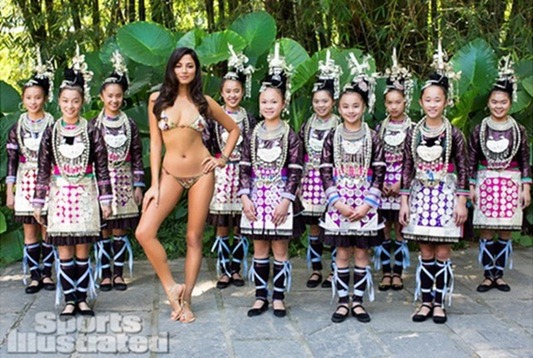 There’s nothing shameful about the minority people’s heritage and culture. The only problem withthe photo is that the caption doesn’t say what minority is represented. China has 56 government-recognized ethnic groups, with the Han majority making up 91% of the population. Minority ethnic groups are referred to as 少数民族 (shao shu min zu),and their traditions and culture are a national treasure in China that should be encouraged and protected. Having traveled through Guizhou, Yunnan, and Xinjiang, where there are large concentrations of minority ethnic groups, I have found that architecture, attire, cuisine, and other cultural aspects of China’s 55 minority groups are some of the most beautiful things in the country, which is probably why Sports Illustrated decided to include them in some of the photos.

The Li River and the karst mountains in its midst are also some of the most beautiful things in China, which is why they used that backdrop for some photos. But why is there a Chinese person guiding the raft the model is riding? According to Stewart, it creates the image of，“A white person relaxing, a person of color working. Tale as old as time. A non-white person in the service of a white person.”

Would Stewart rather have had a white person do the work and put the Chinese guy out of a pay day? Having been to Guilin, I know first hand that the people who guide tours down the Li River are all Chinese. A Chinese person guided the boat that I was on. The vast majority of people who live in China are Chinese, so it’s only natural that Chinese people would get the jobs as guides.

Once again, this attack on Sports Illustrated comes back to a feeling of pity Stewart feels on the Chinese subject. He’s so poor. “They didn’t have to use a dude with dental issues on a river raft,” Stewart wrote.

Her major criticisms of the photo shoot come down to claims that it makes China–and the other locals–look poor compared to the West when each of the locals she mentioned also includes examples of bustling cities. She wants us to look at the cities and ignore the realities of daily life for hundreds of millions who have been left behind by China’s economic growth.

She wants to whitewash the truth. The fact is, while government investment in China has largely been focused on Eastern megacities like Shanghai, Beijing, and Guangzhou, the majority of the population living in the countryside still hasn’t been so blessed. Students in poor provinces where the government has spent little on education have to bring their own desks to school. Small and unsafe school buses crash in rural China killing students due to overcrowding, while advanced buses with safety features are reserved for transporting teachers.

But let’s forget the truth. Just take a picture in front of the Shanghai World Financial Center and talk about how all Chinese are doing great. China is doing much better since it reformed its economy, but it hasn’t caught up to America or Europe, not even for the Chinese middle class.

There’s nothing shameful about guiding a raft down the Li River. It’s an important job for the tourism economy in the region, and it’s obviously necessary for the photo.

The idea of including local culture produced more interesting photos than would have been produced with models standing in front of the Apple Store in Century Avenue in Shanghai or the Uniqlo store in multinational brand mall on the “refurbished” Qianmen Street in Beijing. 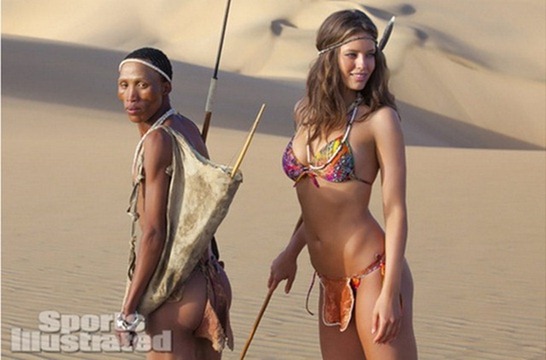 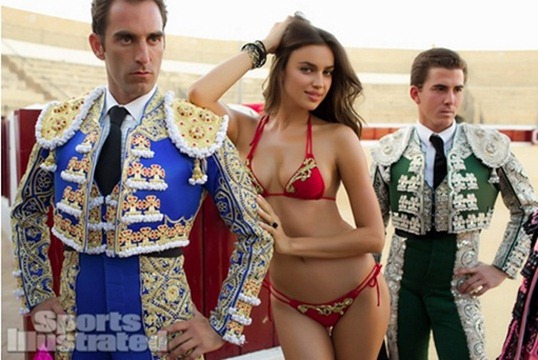 This article was originally published at China Hush.

« Welcome To Xinyang,The Chinese Ghost City That’s Not Even Built Yet
A Journey To China’s Largest Ghost City »