You are here :Home Articles Where are Soccer Balls Made? In Mongui, Colombia

MONGUI, Colombia- “What, do soccer balls grow naturally around here?” I proclaimed in exasperation while searching for a place to eat in Mongui. “I’ve seen five places selling just soccer balls and not one restaurant.” When I was teetering on the verge of thinking that this little pueblo at the end of a road in the Colombian highlands had its priorities very mixed up, it then occured to me that these shops were not only retailing soccer balls, but made them as well. Their signs all read “Fabrica de Balones” (soccer ball factory), and I was soon to learn that this was not just clever marketing: they really were the storefronts for factories that operated right in the pueblo. Mongui, in fact, is well know for its soccer ball industry throughout Colombia.

“But aren’t all soccer balls made in China?”

I needed to see these factories for myself. 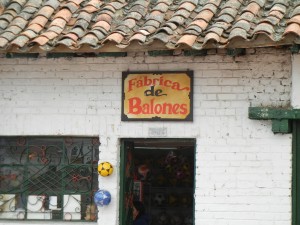 The next day, I began my inquiry into the origins of the soccer balls that I saw for sale all over the village. I found it odd that many of the balls would have English language writing on them — some even saying “soccer” instead of “futbol.” I asked a few of the workers where the factory was, and they would answer with a vague, “Around the corner.”

This seemed strange — what would a factory be doing in the middle of a little pueblo? I certainly did not see any factories when I walked the grid of the town earlier in the day.

I was about to conclude that Mongui was once known for manufacturing soccer balls, but have since shipped production away, and all the soccer ball stores were just trying to capitalize on the pueblo’s “name” as a ball producing epi-center in an attempt to draw tourists up from Bogota — and sell them soccer balls.

[adsense]But my skepticism proved to be very off target, as I walked right into one of the factories myself. It was in a residental part of town, and if the door had been closed I would have walked right by — thinking that it was just another home. After follow the sound of clanking machinery and walking through the wide open factory door, I stopped short at the scene before me:

Around two dozen workers were inside a long room, their hands and arms moving like flutterflies as they quickly assembled soccer ball after soccer ball. Each worker was busy to the highest extent of this word’s definition, their appendages chugging in rigid, repetitive jerks. Biological machines.

The factory itself was just just one large room where the balls were manufactured and a smaller room on the end where the finished products were shrink wrapped and prepared to ship. It was a modest opperation to say the least — a home grown industry in the true sense of the term — but from the stacks of finished soccer balls that rose to the ceiling and the array of those in various stages of completion, it was clear that these manual means of production were highly efficient. 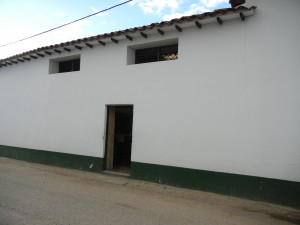 I looked over the hundreds of half finished soccer balls which were hanging from lines strung around the factory’s ceiling area and at the busy hands of the workers who were gluing on the trademark hexagonal outer panes, and I realized that I was looking upon something very impressive: a town mobilized in a singular industry.

Around half of Mongui’s 6,000 residents are involved in either the manufacture of soccer balls or in producing the materials for such. There are many of these little ball producing factories spread all over the pueblo — most of them hidden behind closed doors which a traveler could easily mistake for a home. Mongui exports over 30,000 soccer balls to neighboring countries and the USA each month, let alone the thousands they produce for domestic consumption. Chances are, if you’ve seen a couple of kids kicking around an old soccer ball in Colombia or the northern half of South America, it was manufacture in Mongui — perhaps in the very factory I was standing in.

How Soccer Balls are Made 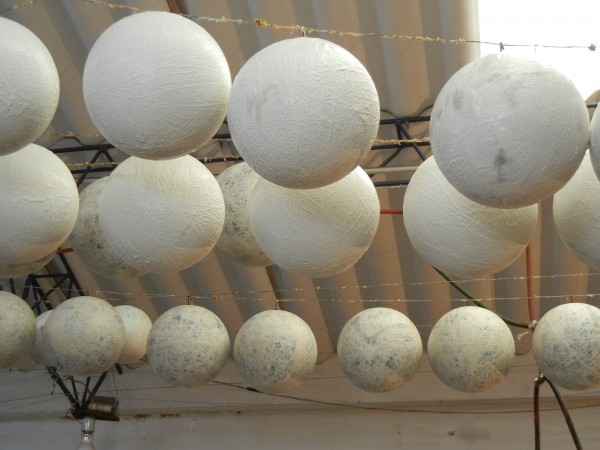 I said hello to a young guy who was cutting out patterns from sheets of leather with some type of industrial press. He smiled at me. I made way into the factory and located the manager.

“How are soccer balls made?” I asked her.

She said follow me, and I was whisked away on tour.

The manager first showed me a box of inflated rubber bladders that make up the interior of the soccer balls, and I picked one up and tossed it into the air. I asked if these bladders were manufactured locally, but could not hear her response over the rattling of the machinery. Though my question would latter be answered by a cardboard packing box that had “soccer bladder” written upon its side. 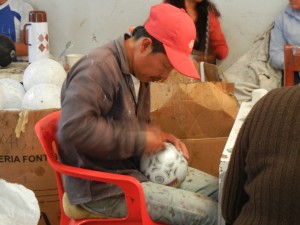 A man in Mongui, Colombia manufacturing a soccer ball

I was then led over to a worker who was wrapping sinew like twine around one of the bare inflated bladders in a speed demon sort of motion. I was told that this was the first step in fabricating a soccer ball. The bladder was completely encased in this twine within a matter of moments and the ball was then passed on to the next stage of production.

The twine covered bladder was then dipped into a large barrel that was full of a soupy, white liquid by a woman wearing industrial gloves. I was told that this was an adhesive which is derived from a plant in the Amazon, and is called something like “taca.” I watched as the woman dunked the bladder into the barrel and then lifted it out completely covered in the goopy white substance. She then pulled out a length of twine from the sloppy blob and attached it to a line that ran across the ceiling area of the room with a clothespin. This now white bladder was joined with hundreds of its brethren, hung out to dry in the factory. I was told that each would receive another layer of twine and one more dip in the adhesive before being passed on to the next stage of production. 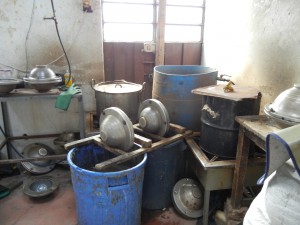 The factory manager then directed my attention to two workers who were sitting at a couple of large industrial presses. They were both cutting out the leather hexagonal panes that make up the outer surface of the balls.

“These are our own designs,” the manager told me  proudly as she direct my attention to four large rolls of vinyl/ leather that were laying upon the floor. On these rolls, which were respectively colored bright green, blue, red, and yellow, were colorful designs, pseudo brand names, and little pictures of icons kicking soccer balls. These images were destined to be the flashy decals on the outside of the finished balls.

“Why do some of them have logos written in English?” I asked.

The manager shrugged, and told me that was just the style.

The two workers manning the presses would place the leather sheets down upon its surface, position it beneath the punch, pull down on a handle, and the desired shape would be cut out. These pieces would then be taken over to the table in the center of the factory to be artfully glued upon the now dry adhesive and twine covered bladders. There were at least ten workers diligently assembling the hexagonal puzzle pieces upon the white spheres with rote confidence. 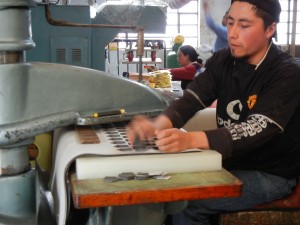 This guy is cutting out the leather panes for soccer balls

Once the balls had a leather outer layer glued upon them, they now looked worthy of the title “soccer ball.” But there were still a couple more steps before they could be kicked around the parks and fields of the western hemisphere. The next move was to place each ball into a large iron mold which was then heated like an oven. This, essentially, would melt together the various adhesives and vinyl-like leather into a contiguous entity. After cooking, the ball would then be placed in water to cool, and then taken into the shipping room to be dressed up in shrink wrapping and packed to leave the factory.

This is how soccer balls are made in Mongui, Colombia.

For 60 years Mongui has been manufacturing soccer balls en masse. Such manual industry — where workers assemble products by hand from start to finish in a single room — is becoming rare in the face of rampant mechanization. The soccer ball industry of Mongui appeared to be booming, but I could only wonder when it would prove cheaper to consolidate the little factories into a monstrous plant, replace hands with steal, in a move to raise the bottom line. The single industry town is a throwback to another era in capitalism, and Mongui stands as a unique reminder of this age. 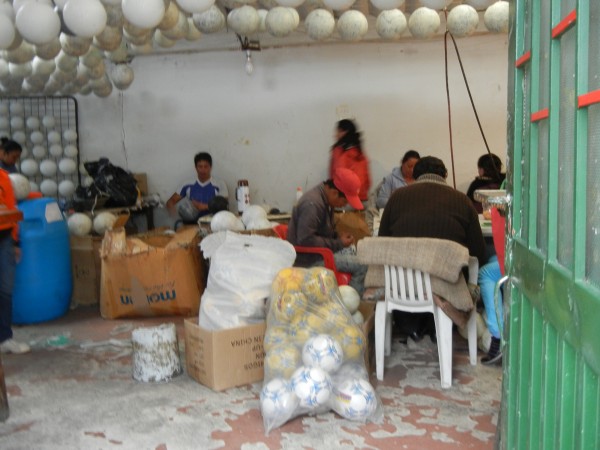 Mongui also had the distinction of producing what could very well have been the largest soccer ball ever: a six foot tall blue, red, and yellow monstrosity. Well, until Lagos made one six times larger.

Video of soccer balls being made in Mongui 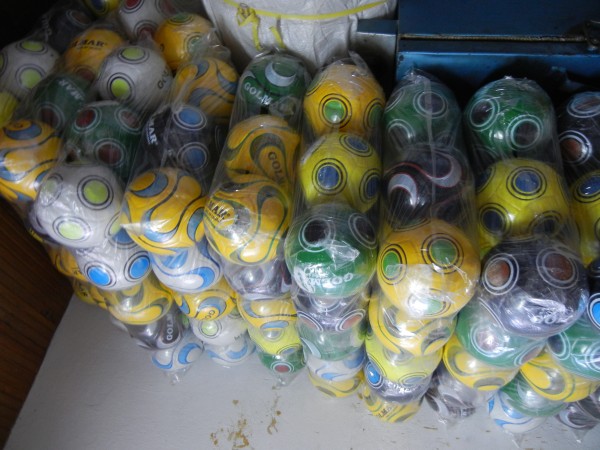 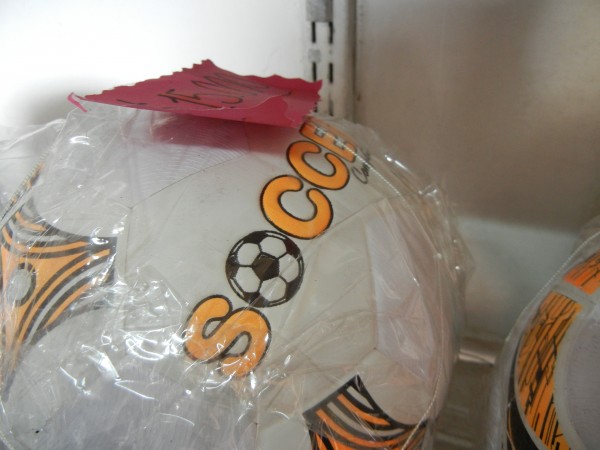 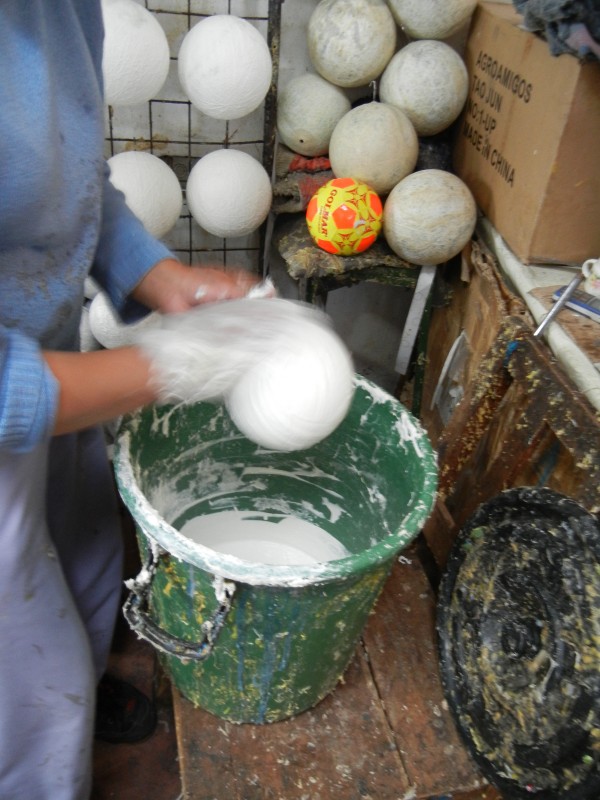 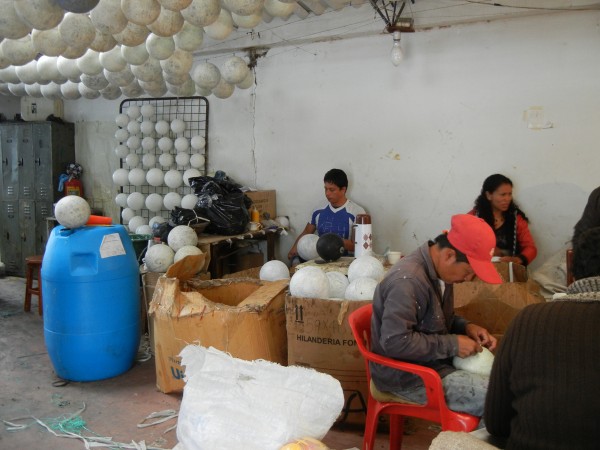 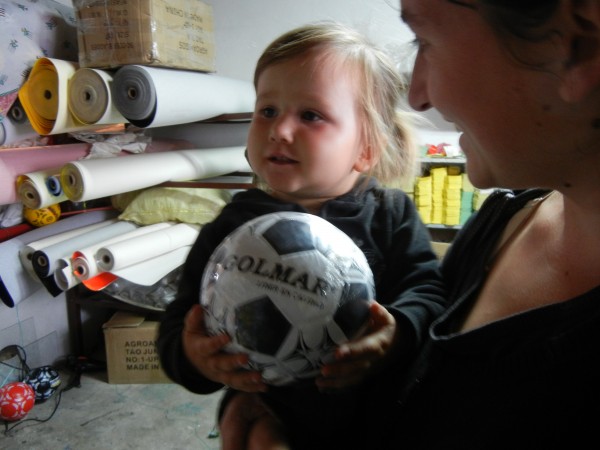 « Hasankeyf – Another Ancient City to be Destroyed
Whaling in Iceland: Tradition Under Siege »