You are here :Home Art and Music The Traveling Traditional Chinese Opera

I was lured in by the music, by the singing, the thumping of wooden blocks, the plucking of strings, and the striking of gongs. From a distance I thought that the big red tent that was set up on the sidewalk was just another winter clothes sale, but as I got closer the sounds coming from within told me otherwise. I peeled back the vinyl flap that served as a door and stepped inside. I found a man and a women dressed in immaculate costumes belting out high pitched vocalizations on a stage before a packed audience. This was no sidewalk sale, this was Chinese opera.

The actors were swaying to and fro, moving their arms with precise movements, crooning, spinning, and speaking in the particular up an down tonal extremes that is typical of this culture’s native rendition of theater. They wore silk robes with motifs of phoenixes and dragons over them, their faces were painted, the men had long, faux beards and mustaches and immaculate hats, and the women sported faces that were completely made up and hairdos poofed up like crowns. They acted out a story in both words and song that completely transfixed the attention of the audience. I struggled for a position in the rear of the tent, it was hardly standing room only.

The performers impersonate princes, generals, soldiers, emperors, princesses, and jesters as they act out timeless stories from China’s history and literature. Their faces are covered with makeup, the colors and designs of which are wrought with symbolism that tells the audience what function and rank a character has, as well as if he or she is good or bad. Each movement these actors make and each word they sing has been crafted from over 1,200 years of tradition. These performers glide over the stage like living relics of a forgotten time, performing old stories for old people, sharing a vision of a China that has now vanished. 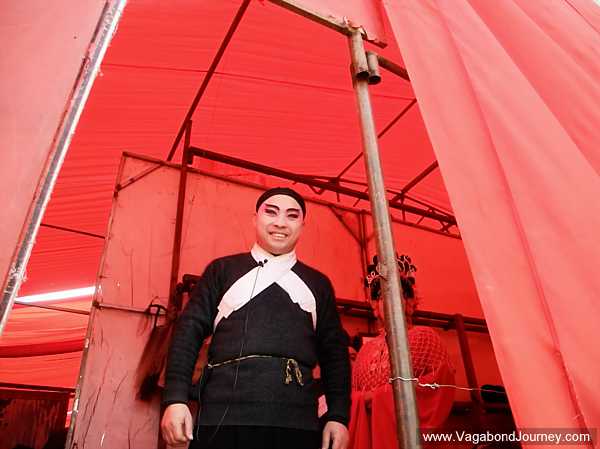 Opera troupes like this one travel from village to village in circuits around China, continuing a lifestyle that is as old as the costumes they wear, the stories they tell, and the songs they sing. The traveling theater is an aspect of Chinese culture that survives beyond the high-rises, outside of the cities, operating off the radar of the modern world, on the power of tradition. They are representatives of the underbelly of a culture that is being wiped out by the decrees of modernization. One look at the demographics of the audience told me that things like this are not of this era: everybody was old. The only people who looked under 50 were the babies being tended to by grandparents.

The younger generations here generally have little interest in traditional theater, the plots are often too complex and the stories too drawn out and long-winded to keep the attention of people acculturated into the smartphone age. Chinese opera is something old in a country that has become obsessed with the new, it is a tradition that is now out of step with the culture that literally spent ages cultivating it. Same old story. 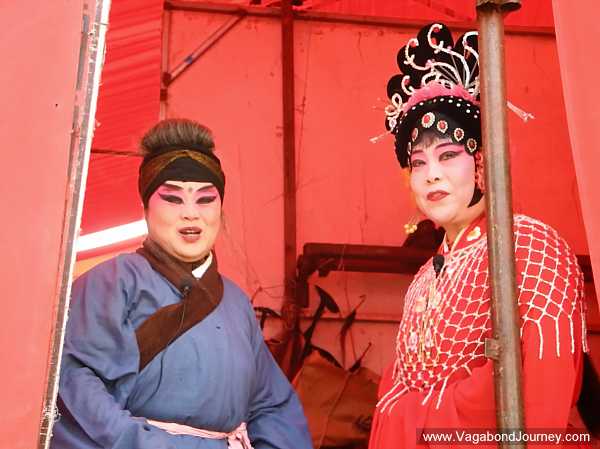 I was on the outskirts of Taizhou, in an area right at the cusp of the countryside. On one side of the highway massive housing developments are being constructed, on the other there is nothing but agricultural fields for miles and miles. This is the new front line of this city, which is rapidly encroaching upon the farms and villages all around it. What was farmland only a few years ago is now rocking with construction crews, heavy machinery, and tons and tons of concrete. Dozens upon dozens of rows of middle class housing developments have already been erected here and thousands of square meters have been cleared for more. 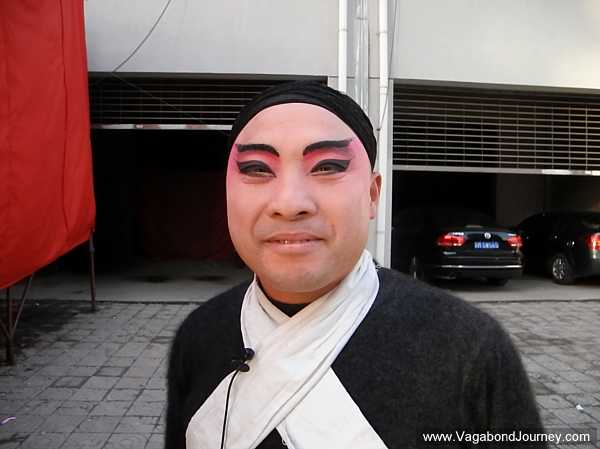 Five years ago there was nothing here but rural China, now there is city. But it’s either virtually empty or still being built. This is the crossover stage of urbanization, where cultural development lags behind material development. “It” is being built, but it’s too soon for “them” to come. But leftovers of what was here before remain: rural people still linger on, many live in a modest housing development nearby, where they may have been relocated when their farms were claimed for development. The effect is old China warped for the modern era: the people are the same but everything around them has changed.

It was for these people that the opera came. 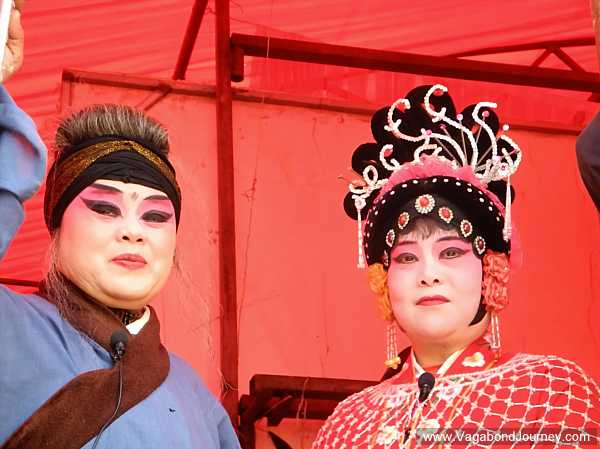 Actresses in a Chinese opera backstage

Old tradition in this county lies outside of the cities, and the traveling opera is one of the oldest Chinese traditions of all. They come into a village, set up a tent and a stage, perform for a day or two, and then move on to another village.

Like most everything else in China, opera is very regional, and various parts of the country have their own styles. So while these traveling troupes are often on the move nearly continuously, they generally stick within a given range where the people understand their stories and language, and are familiar with their theatrical methods. 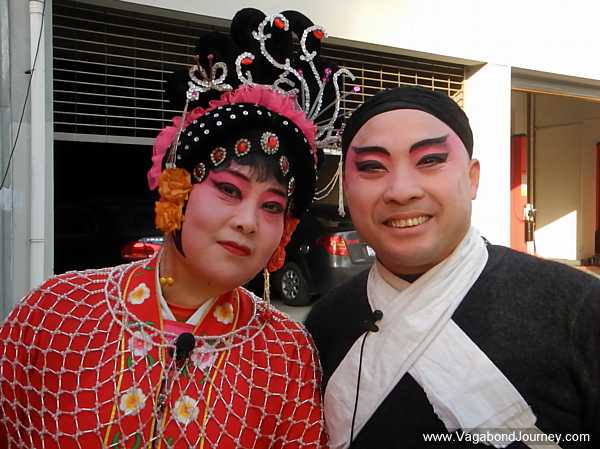 I went behind the tent to meet with the performers. I found a man whose hair was clamped down with a tight, black skullcap, whose face was powdered and colored red around the eyes. He smiled as I introduced myself. I asked him if performing in the opera was his full time job. He answered in the affirmative. He was from another city in Jiangsu, and he has been in the opera for twenty years, traveling a circuit around the region, performing in villages and small cities. 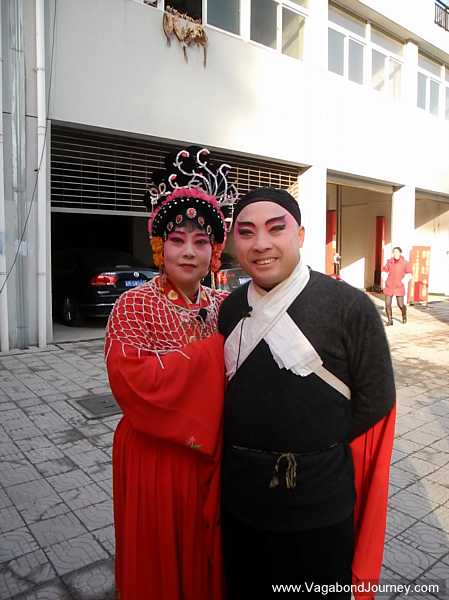 The actor seemed happy to pose for my photos, and I soon attracted the attention of the rest of the troupe who were not on stage. A couple of actresses were leaning in the backstage door chattering about me. I couldn’t make out their words but they were smiling. I told them that their costumes were beautiful, and they welcomed me backstage.

I stood behind the band, an essential element of Chinese opera. I watched as they played the music that the actors sang to and danced to and emphasized important phrases and comical punchlines with clangs on a cymbal or clicks from wooden blocks. There were instruments that looked like harpsichords, fiddles, xylophones, a musician who manned a set of wooden blocks, and another who played a big war drum and cymbals. 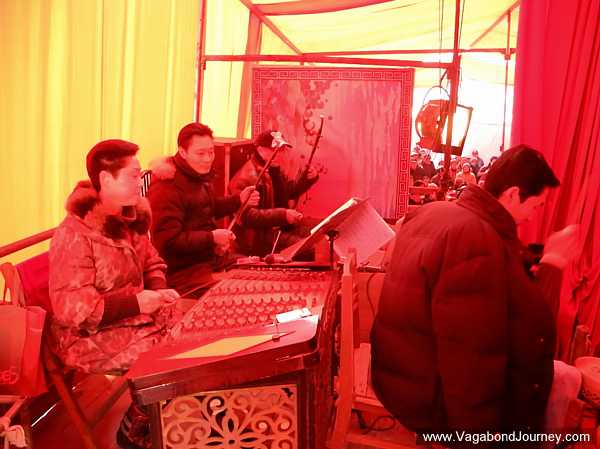 The musicians are behind a curtain next to the stage

There are the formal opera houses that attract the middle/ upper classes and tourists in the big cities of China, but this was a tradition a world away from all that glitter and glam. This was raw, this was real. In this era, the traveling Chinese opera is plied with little fanfare, and is mostly performed in small villages on the brink of nowhere for the old, poor peasants. These performers do not live the high-life often attributed to entertainers. No, they get paid very little and must scrape together a living on the road — sleeping rough, eating bitter. The low pay is another reason why China’s traveling opera is fading fast into history. 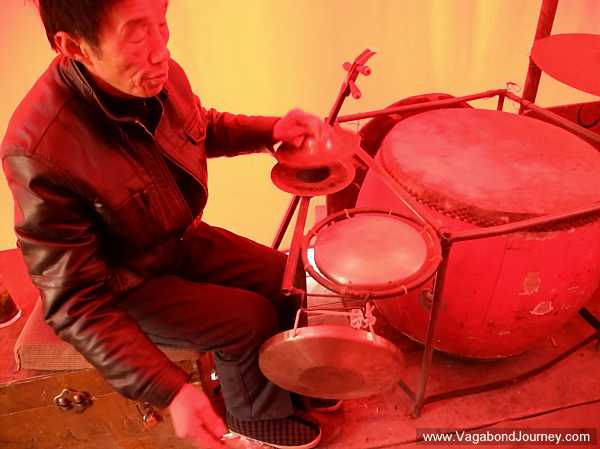 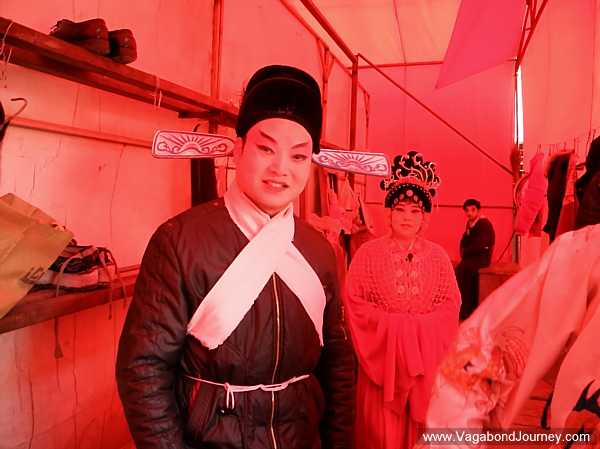 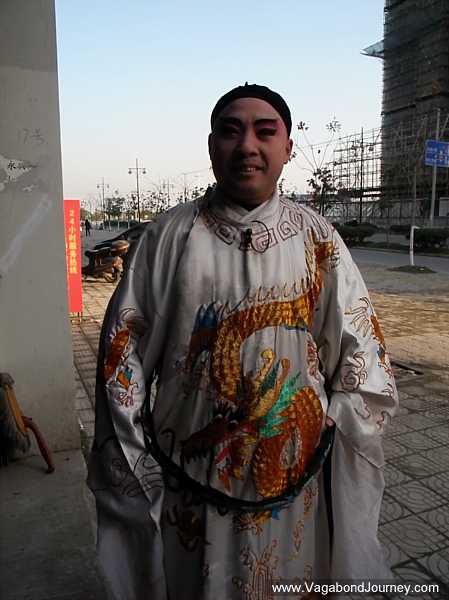 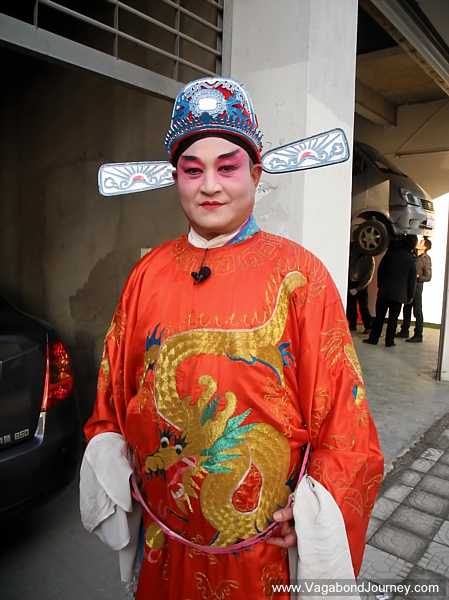 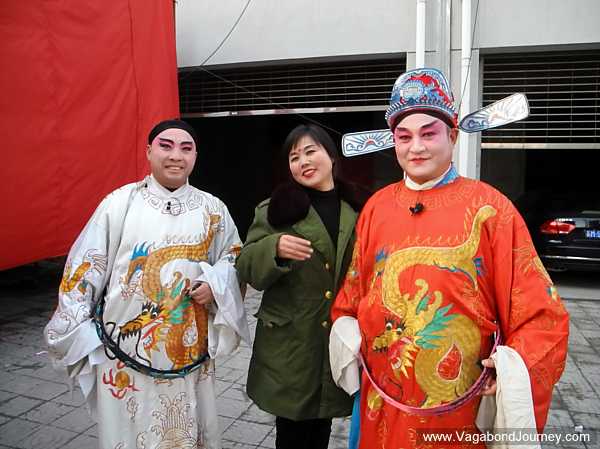 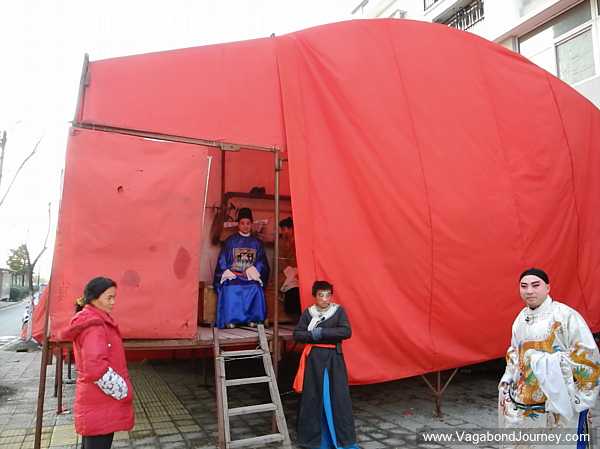 Behind the tent that the traveling opera set up in Taizhou 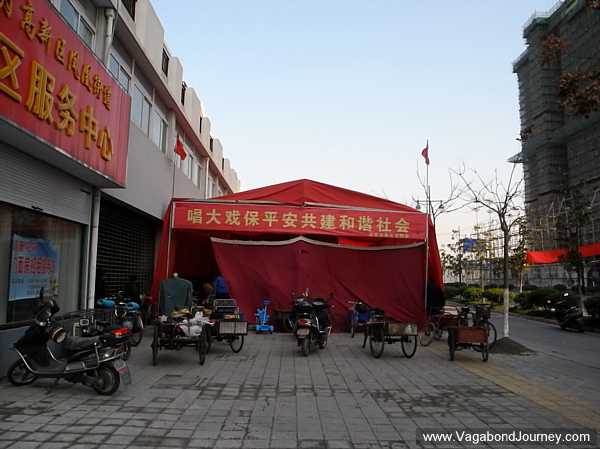 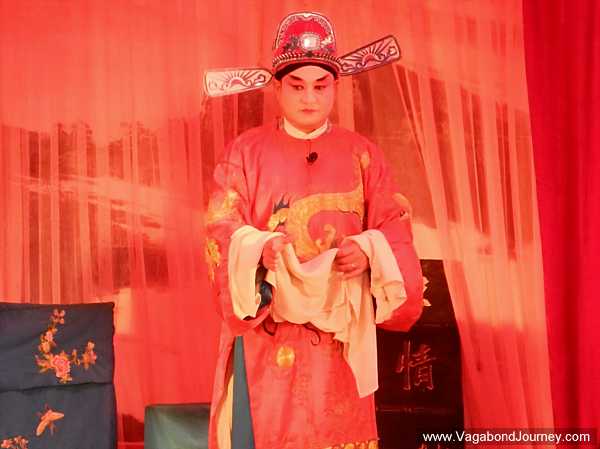 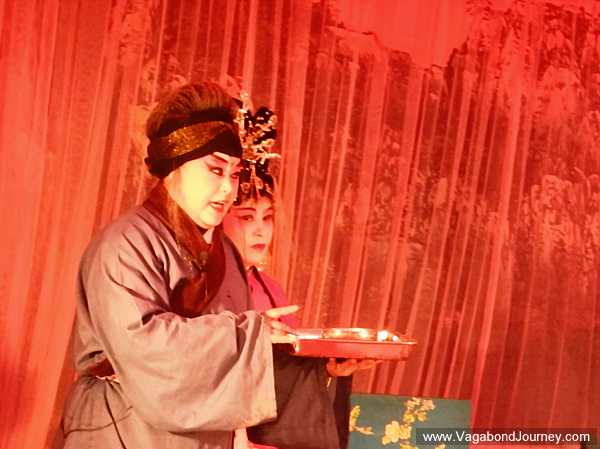 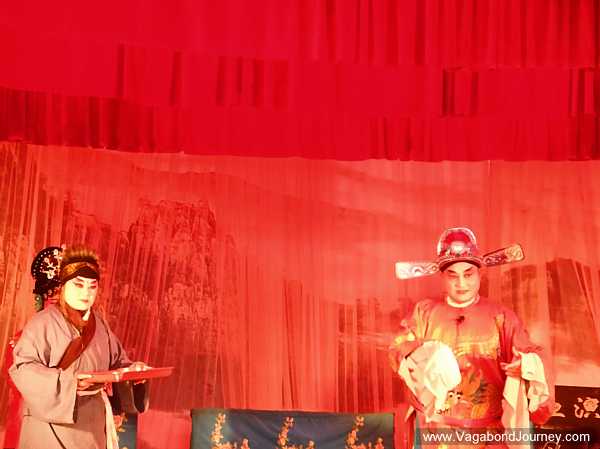 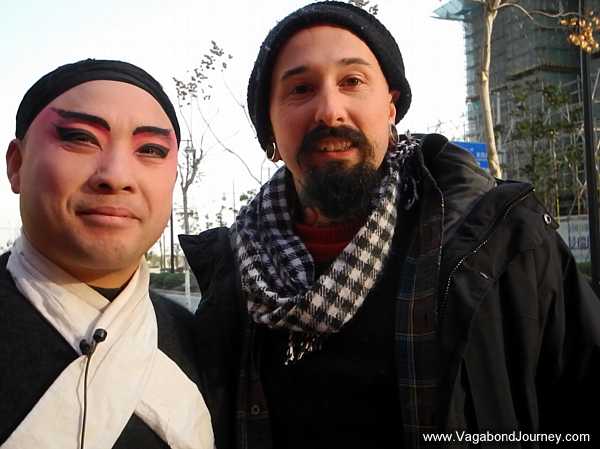 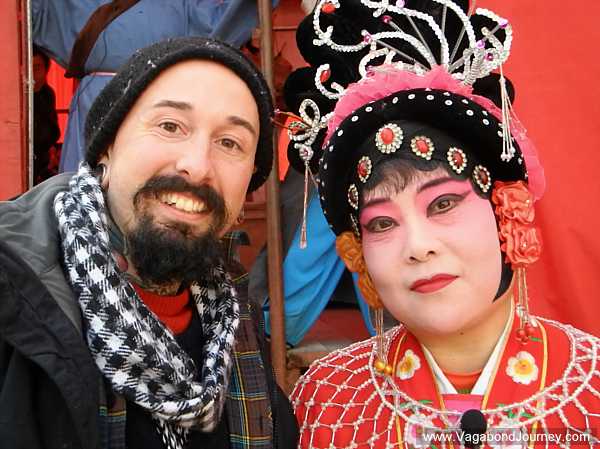 Go to Transported by Song: A Traveling Opera Hits the Road for more about the itinerant Chinese theater.

« Shenzhen, China: Where Your Stuff Is Made
China’s Air Pollution Index: Just Like Checking The Weather »