You are here :Home Articles Spicy Food and Revolutionaries in Hunan

In Chengdu, I had just experienced the most delicious week of my life. I had tasted Sichuan delicacies like tiger skin peppers, scorching hot hot pot, and authentic ma po tofu. When I stepped off the overnight train to Hunan and was greeted by Tan Chao in Zhuzhou city, I said, “Hunan food has a lot to live up to.”

Not a good way to great a Chinese friend. Chinese people are ardent that everything from their hometown is the best, and Hunanese people are especially fiery in defending their interests.

Throughout its history, Hunan has produced fierce nationalists and revolutionaries, the most famous of whom was Mao Zedong, the leader of the Chinese Communist Party who founded the People’s Republic of China. Mao told journalist Edgar Snow that people who consume diets heavy in hot peppers are natural revolutionaries.

Needless to say, Tan Chao wasn’t happy to hear my comments. Hunan and Sichuan cuisines are the two spiciest styles in China, so there’s a little rivalry between the two provinces as to whose food is the best. Chao and her friend, Kerry, were ready to set me straight.

We set out for Changsha, Hunan’s capitol city 70 miles north of Zhuzhou, where we would have lunch on Hunan’s most famous snack street, Huang Xing Road.

At the entrance to Huang Xing Road is a statue of Huang Xing, another Hunan revolutionary. In 1911, he led the military force that overthrew the Qing Dynasty and began the period of Chinese republicanism. Kerry took a photo with me under the statue. 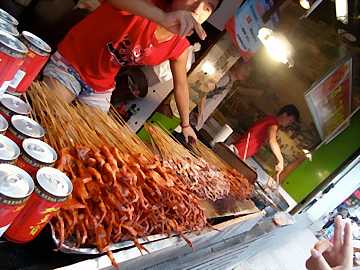 Xing Road is a pedestrian street lined with tables and small restaurants selling all kinds of noodles, barbecue, tofu, sweets, and more. We got started with barbecued squid and beef skewers, in Chinese called “shao kao.” In keeping with Hunan’s reputation, the shao kao there was spicier than any other shao kao I had eaten.

After the spicy shao kao, Tan Chao gave me a sweet tang you ba ba, a ball of fried dough whose name is translated as “sweet oil cake” in English.

Chao then led us down Yuying Street, just off Huang Xing Road, and the parade of snacks continued with fish balls, cool and spicy noodles, and baozi. 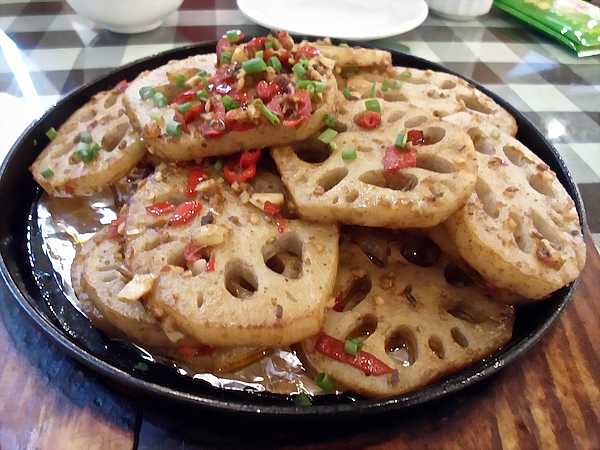 After lunch, we returned to Zhuzhou to have dinner. For dinner, we went to the Xiangjiang Fengguang district near the Xiangjiang River where there is a line of outdoor restaurants specializing in fish. We ate at Yu Xiang Wang, or “Fragrant Fish Bay.” We sat around a table outside on plastic stools as plates were delivered to our table.

The meal started with an appetizer of peanuts. The first two dishes to arrive were lotus with peppers and bitter melon with peppers, both of which were harshly bitter but balanced by the peppers. Later, there was pig intestines with green beans and tomatoes, and tofu with green peppers. But the highlights of the meal were the “side fish” with green and red peppers, and the pig bones.

The pig bones were large bones with succulent pork covered in green peppers and black beans. They weren’t ribs, but much larger bones, the kind of dog might like to play with. I have heard some of my Chinese friends say, while eating salad, “I feel like a rabbit.” I felt like a dog when chomping on pig bones.

After dinner, we went to the Yan Emperor Public Square. In the center is a statue of Shennong, a legendary 3000 BC ruler of China and inventor of multiple farming instruments.

On the way there, Chao’s brother, Tan Qiang, stopped at a convenience store to buy something.

“Try this,” Tan Chao said, pointing to what Tan Qiang bought. “It has a very extreme flavor.”

She handed me what looked like a piece of tree bark that she wanted me to put in my mouth and chew. I was apprehensive, knowing how “extreme” certain kinds of Chinese food can taste. It had a smoky smell even before I put it up to my mouth. 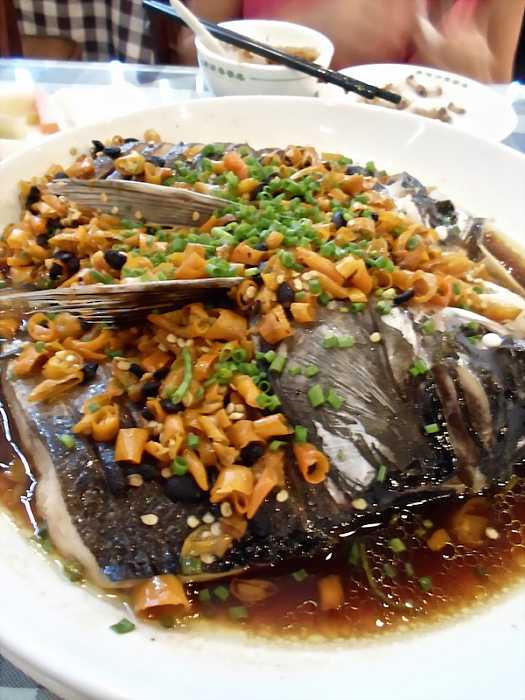 “Get some water ready,” I said.

“Water won’t get rid of the flavor!” Chao said, laughing.

“It’s bing lang,” she said. “It’s like Hunan people’s gum. We love chewing it when we are having fun, because it will make you feel excited, like smoking.”

I looked at it for a few moments and put it up to my mouth. As the foreigner, I always have to submit when Chinese people want me to eat “extreme” foods. Whether it’s the hottest food, the strangest food, or the smelliest food (stinky tofu), Chinese people love seeing the look on a foreigner’s face while eating some kind of food he’s not used to eating at home.

Bing lang, or areca nut, has a woody taste and consistency. It comes from the seeds of the areca palm, which grows in the tropical Pacific and south Asia. After I chewed it longer, it started giving off an intense kind-of minty taste. It was so strong that I started feeling kind of sick and spit it out after a few minutes.

It’s not just foreigners like me who find the areca nut extreme. When I brought some back to Shanghai and gave them to my non-Hunanese Chinese roommates, it was the first time they had consumed it. They also found the taste intense. My roommate Ariel spit it out moments after she started chewing it. 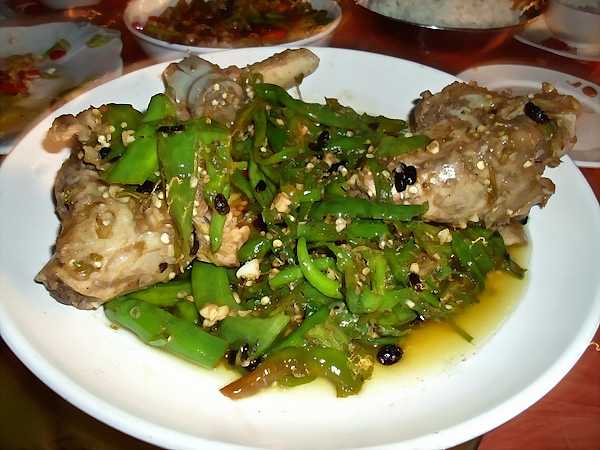 The next day, we stayed in Zhuzhou and ate at Miaoqu, a restaurant on Jianshe Street in downtown. Between playing games at the arcade and watching a movie at the theatre, it was close to everything we planned to do that day.

The fish was a variation of “cut pepper fish head,” a famous Hunan dish. Two fish were covered in pickled orange peppers with green onions and black beans.

After dinner, my adventure in Hunan cuisine would come to an end. I left Hunan on a train that night, and Tan Chao gave me chicken claws at my send off.

A few days after I got back to Shanghai, a group of Hong Kongese activists landed a boat on the disputed Senkaku Islands, known in China as the Diaoyu Islands, and raised Chinese flags. Shortly after landing, they were arrested by Japanese forces and later deported back to Hong Kong.

All of the activists were Hong Kongese, but in 2004, the last time Mainland Chinese landed on the islands, a Hunanese, Yin Minhong, was among those who participated. This time around, many Hunanese were outraged that the Japanese had reasserted their claims to the islands. There was a protest march held in Changsha on August 18. Huang Xing Road was filled with hot-blooded Hunanese fighting for their territorial claims under the statue of the man who led the fight against the Qing Dynasty.

Kerry attended this protest and posted on China’s microblog Weibo: “At the entrance to Changsha’s pedestrian street, under Huang Xing’s statue, where there is a protest against Small Japan’s actions in the Diaoyu Islands! Immediately, my passionate patriotism is aroused.”

Is it any coincidence that Huang Xing’s statue is built on Changsha’s most famous snack street? The “hot pepper spirit” can be found wherever there is hot pepper food.

« Mountains And Rivers Without End: Zhangjiajie Forest And Wulingyuan UNESCO Site
The Film and the Reality: Inside Hong Kong’s Chungking Mansions »