You are here :Home Articles China’s Traffic Crisis is a Population Density Problem

From Guangzhou to Beijing, Shanghai to Chengdu, there is one common crisis: traffic. The rapidly rising number of personal automobiles on the roads of China are clogging the country’s highways and jamming it’s avenues and streets, making them more akin to slow moving glaciers than fast and efficient arteries of modern transportation. In parts of Shanghai the traffic is so thick that people on bicycles often move faster. A couple of years ago Beijing had a 100km, 9 day traffic jam. Seriously, this country has a traffic problem — and everybody knows it.

China has entered the age of the automobile. There are now over 100 million passenger cars in the country, a number that is growing by 27% per year and accounting for half of the world’s automobile sales. In Beijing alone, there are over 5 million personal automobiles — a number that is greater than the populations of half the countries in the world. The only country in the world with more cars is the USA. The country with the most people on the planet has gone car crazy.

What, really, does this mean?

Why are there so many cars in China? Oh wait, everyone wants one.

“The greatest ‘communist’ society ever invented doesn’t know what to do. That’s what worries me. Cars are not something any kind of government can easily control if they’re cheap to buy and cheap to drive.”

“I really like what the car brings to my life – convenience, freedom, flexibility, a quick rhythm. I can’t imagine life without it,” ran a quote in an online news piece from a new car owner in China. This single sentence expresses the general sentiment in support of car ownership the world over. I can remember my father teaching me when I was a teenager about the benefits of  automobile ownership. “Your car is your wings,” he said.

The car is becoming the wings of more and more people in the developing world year after year. Often, they are not truly needed in many of these counties, but this doesn’t keep masses of the new rich and middle class for wanting them. China has a new middle class that is bulging at the seams which covets no other status symbol as much as their own car. In fact, the acquisition of a personal automobile is a benchmark of social ascension the world over, and it’s my impression that the rate of new car sales in any country is a litmus test for its current economic status. From looking at new car sales alone, it is clear that the people of China are rising faster economically than perhaps anywhere else on earth.

“When you grow up and start to make your own money what’s the first thing you’re going to want to buy?” one of my uncles once asked me rhetorically. It was clear what he was getting at: as soon as the modern human is financially able they get a car. It’s no different if you’re a young adult in the USA or a member of a country in the midst of rampant development. A car more than anything else shows that an individual has stepped into the modern age. “ . . . it’s like the ’50s all over again: the car is at the top of everyone’s wish list.” The personal automobile is the sign of status in China, and everyone who is able wants a cut of it — whether they really need it or not.

There is no turning back, to return to the bicycle now, which was China’s most sought after form of transportation up until recently, would be a joke. As put by B.K. Chaturvedi: “Cycling is a minuscule thing. That’s not the future.” 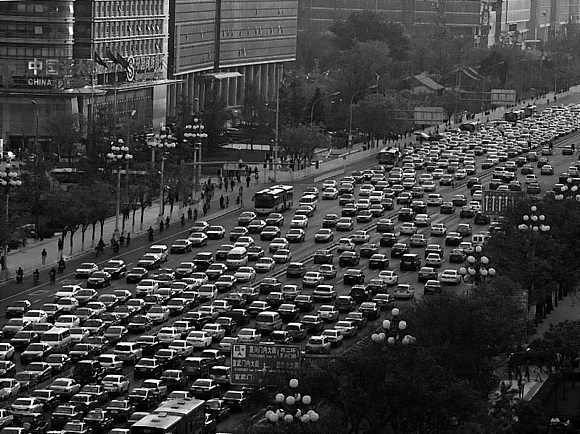 Where do we park these things?

In cities where people seem to be crammed eave to eave, adding additional parking space for personal automobiles is to push the physical carrying capacities to the limit. The roadways are clearly not the only places where cars are vying for space, as each vehicle that goes on the road also needs a place to be parked. China is a country where space in urban areas is a hot commodity — “square meter” is the prime selling metric for apartments — and adding an automobile to an individual’s space requirements here is to push the limits of population density.

These measures have caused great controversy in the country, and many feel as if they are just bandaids for a bullet wound.

I was watching two “experts” debating the issue of China’s traffic problem on CCTV News a couple of weeks ago. It is my impression that both men were suppose to square off and have a debate, but they were clearly on the same page. Neither man wanted to say that there were simply too many cars in China’s cities and neither wanted to go on record in support of the very unpopular quota systems on new vehicle registrations. Both men kept stating:

“It’s not the number of cars it’s how the cities are set up, limiting vehicles on the road will not fix the true problem.”

They may be right.

Automobiles and the decrease of population density

The USA has 812 automobiles per 1000 people while China only has 83. One country is having an all out traffic crisis while the other maintains transportation homeostasis with 3 times more vehicles. China’s traffic problems are a symptom of far greater problems: overpopulation and the inequitable distribution of this mass of people.

One out of every four passenger cars in the world is in the United States, and this country is able to have this many vehicles on its roads for one reason: a more evenly distributed population. The people of the USA are spread out around the country, most living within commuting range of small to mid-size, rather than large, cities. In part, it was the rise of the personal automobile that allowed the population to space out in this manner. If Americans all lived surrounding a few major urban centers there would be no way the country could handle 250 million cars.

In point, the automobile has the effect of lowering urban population density by enabling people to live in the suburbs and small cities of a country rather than inside and on the fringes of the large ones. When this movement matures businesses and places of employment often follow suit. This pattern started in the 1950s in the USA, and has now worked itself out to maturity. In many cases, US “car culture” created the suburb and left many cities to rot.

China’s population is more or less in check, it’s population density and the growing resource usage patterns of that population that’s the problem. The masses of this very large country are now huddled all together in and around a couple dozen super-cities. This is a phenomenon that seems to be on the brink of change or bust. Anyone who travels outside of urban China will see something of interest: giant housing projects going up everywhere — even out in what seems to be the middle of nowhere. It is as if the country is building a single, giant urban stage from Harbin in the north to Nanning in the south. I could only hope that there is a greater plan behind this seemingly excessive madness. 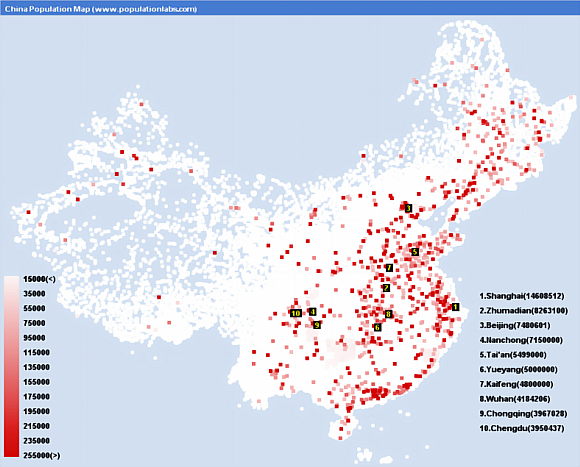 With each new apartment complex that’s built far out away from everything comes the potential to develop the area into a new satellite city — aka, a suburb.  As of now, populating these new cities is a very touch and go phenomenon: some take off and within a decade become full functioning quasi-urban centers, while others fall to neglect. But the infrastructure for people to move outside of China’s major cities is being created one concrete and rebar high-rise at a time. But the only people who can access these new areas are those with cars.

The big city dwellers of China do not need cars. Seriously, they are status symbols in the raw. The public transportation networks of these cities are excellent. But the population densities of these places are off the charts, housing has become incredibly expensive, and the air quality is beyond measurable. We are in the beginning stages of a trend that will see many Chinese people and businesses leaving these megalopolises behind in exchange for the new satellite cities that are being built for them. We are in the beginning stages of the population of China evening out and becoming suburban. Like it was in the USA, the personal automobile is at the heart of this transition.

Whether the side effects of this movement will curb the benefits is anyone’s guess, but, as of now, China is in the midst of an infrastructural revolution: its urban population density is far too high for the level of luxury many of the people can now access. As I see virtual seas of high end apartment complexes being built out in rural areas, removed from everything and everywhere, I know that a major cultural change is at hand, and the automobile is the vehicle of that change.

The true question here is whether China can make the transition from a country with a giant population to one with a giant population that consumes resources on a first world level. In this light, the lowering of population density may be moot in the face of physical limitations on resource acquisition. Just as there is not enough room for everyone to have a car in the cities of China, there simply may not be enough room for this country to develop completely.

Read No Rules: Driving in China, for more on what traffic is really like here.