There was something Quixotic about that place, which was perhaps appropriate as I was standing before a row of giant, mock windmills. They used to power the town’s streetlights, I was told, but now they just sit there, doing little else other than setting the thematic stage. Their co-actors were faux, red tiled Spanish style buildings, a commercial center that was made to look like a Santander market, statues and decorations of overly typical Iberian scenes: Don Quixote, churches, etc . . . Paradoxically, the theme matched the reality perfectly, this was a place that was chasing something that wasn’t there.

It was called Fengcheng, it was Shanghai’s Spanish town. It was another of the One City Nine Towns Western replica developments that began ringing the megalopolis in the early 2000s. The plan was that upper class Shanghai would suburbanize USA style, and in the process reduce the city center’s population density while developing and gentrifying the outskirts. It was a dream that never fully came to be. While most of the properties in these new towns sold for astonishingly high prices, very few people actually moved into them.  This stagnancy came along with a procession of political problems — including the imprisonment of the project’s main driving force, former Shanghai mayor Chen Liangyu — which left  most of the towns at various stages of completion. Some, like Thames Village, Anting German Town, the Waigaoqiao Dutch neighborhood, and the Pujiang Italian development, had core areas that were constructed, but others never really rose above the ground. For an extended amount of time, Fengcheng Spanish Town floated in between these two extremes.

It took over two hours to travel the 60km out to Shanghai’s Spanish enclave from the city center. After riding three subway lines — taking two all the way to the end — and two buses, I arrived in Fengcheng. Most of the town was generic, urban sprawl: a normal Chinese big city suburb.  It was a menagerie of architectural styles, urban design layouts, and time periods piled on top of each other. Five story buildings with shops on the ground level and apartments mixed in with mid-rises and patches of village-style neighborhoods. The stores were the usual Chinese fare: cheap restaurants, cheap fashion outlets, KTV parlors, convenience stores, car repair shops, a grungy supermarket, and mediocre shopping centers. It was scape throughout.

“Scape is neither city nor rural landscape, but a post-urban condition.” -Rem Koolhaas

The Spanish development — something that should have looked strange and out of place — fit right into this paradigm.

I knew I’d arrived when I saw a giant yellow building with ornate white trim and red tiles that resembled an old Spanish town hall. A parking lot spread out in front of it as a substitute for a plaza. Both were completely vacant, the inside of the building was dark, harboring little other than a dusty old chandelier hanging from the ceiling. Next to this developmental flop that was meant to be the town’s center, was its only bonafide housing complex. It was called the Oriental Madrid Compound. There was a European style fountain at the gate, but that was about as deep as the Spanish influence got. Apparently, the designers tacked on some Iberian looking ornamentation to the buildings — yellow paint, carved white trimmings, and wooden beams to hang laundry on — and left it at that. Unlike in Thames Town where the houses are actually modeled off those in old England, or in Anting where genuine modern German houses were constructed, Fengcheng’s Spanish town was just two hundred apartments aligned in typical Chinese housing blocks. 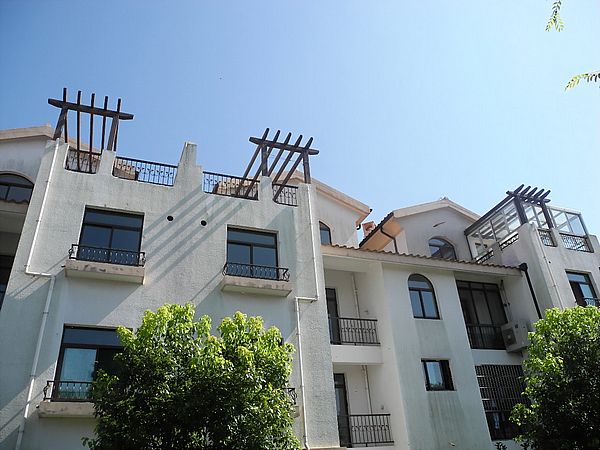 Though also unlike in Thames Town or Anting, most of the apartments in Fengcheng’s Spanish town appeared to have been inhabited. Their interiors were constructed, there was laundry drying on rooftops, humming air conditioners dripping waste water, cars in driveways, and people in windows peaking out at me, apparently wondering what I was gawking at. As far as habitation counts are concerned, the place was in no way a ghost town, and even with the superficial Spanish theme there was little about it that seemed out of the ordinary.

Across the street from the housing complex, a matching Spanish style shopping center occupied half a city block. I walked into the inner pedestrian mall and was not surprised to find it in disrepair due to disuse and neglect. Entire sections of it was row after row of dusty windowed, vacant shops which never even had the distinction of going out of business as they never opened in the first place. While the shops along the main streets had businesses in them, they were not of the type that the designers of this town probably intended. Where the vestiges of luxury consumer culture were supposed to have arisen was a grotty looking KTV joint; where there was supposed to have been fine dining there was a $1 noodle stall; where stores offering the finest products of Europe were supposed to be there was a small martial arts school. 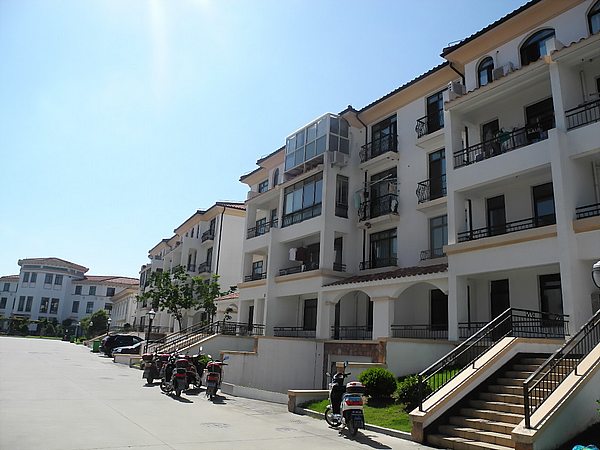 Shanghai’s foreign themed suburban towns were meant to be little pockets of high-culture spread around the periphery of the city. They were made for the new upper classes to sip red wine, talk about literature, and listen to Bach in. They were built for the new culture of Chinese who wanted a living environment that they felt was superior to the run of the mill Chinese experience. These new towns were meant to be novel, they were mean to be exotic, they were meant to have been pockets of civilization strategically placed in the untamed hinterlands of the city.

What they actually became were cultural cavities. The high classes that were intended to fill these foreign themed towns never materialized, and the Western style architecture amounted to a marketing ploy that never really hit the mark. What was supposed to have been enclaves of the educated, rich, and cultivated became gaping holes in the fabric of the city. Around the Western themed towns working class urban life flourished, grew, and developed, but inside them was a hallow vacuity. Crossing from the former into the later was like stumbling into the hole of a doughnut. These foreign towns became untouchable, and many, like Fengcheng, were simply too remote — physically and metaphorically — to attract the population they were built for. 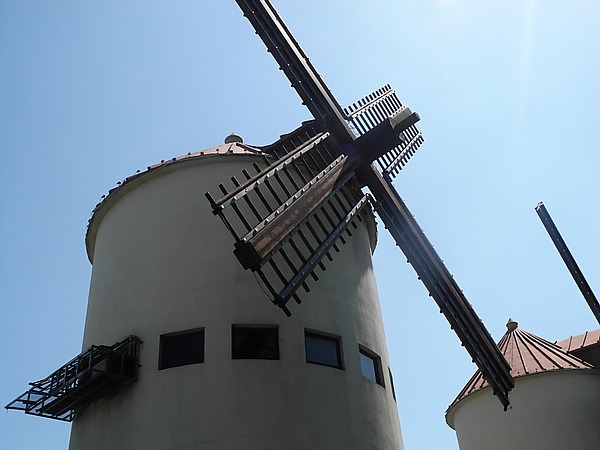 Eventually, the commoners moved in to many of these Western towns. Crossing from the borderlands of the generic city, generic local businesses and a generic population invaded Fengcheng’s Spanish town. You now almost need to squint to see beyond the flashing neon lights and typical Chinese scenery to notice the European style facades. Like what had happened in Shanghai’s Scandanavian town, this catalyst of Iberia was recolonized as a normal Chinese town.

Nobody I met there seemed to know why the place was done up in a foreign style. It wasn’t really something the people there seemed to talk about.  Nobody I met knew what the One City Nine Towns project even was. Many didn’t even know that the development was supposed to look like Spain. I would talk about the Spanish architecture and call the place a “Spanish town” and they would look at me like I was some confused foreigner. The place was just another of a zillion new urbanization projects that have transformed Shanghai so rapidly that European themed towns almost blend in with the landscape. In this fray, Fengcheng Spanish town was truly nothing special. 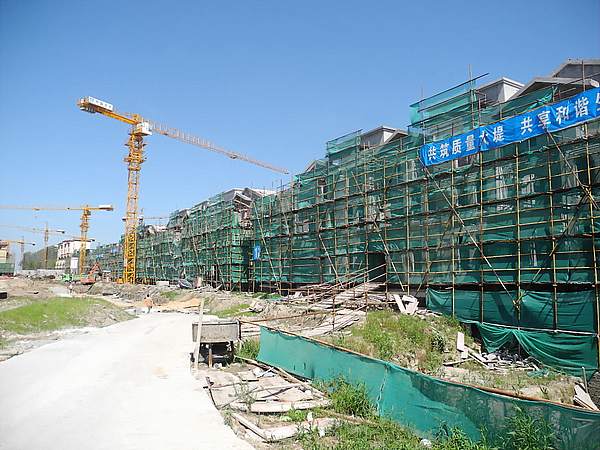 Though construction continues. An entire new, 120,000 sq meter development, which seems as if it will more than double the “Spanish-y” part of Fengcheng, is going up to the east of town. Row upon row of mid-rise housing blocks with European facades are rising out of the moist, loamy soil. There is already a faux McDonald’s, a mock bakery, and store fronts for Spanish restaurants that don’t really exist — promotional staples of new developments in China. Even as most of Fengcheng Spanish Town wallows in disuse or has been co-opted by local-grade businesses, they keep building it — they keep chasing windmills. 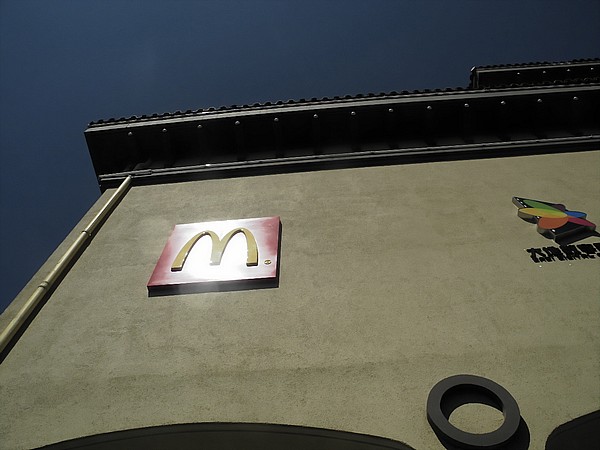