“Around 14 years ago I went up into the tower with an urban developer and we looked south. We could see all the way to the river then, there was nothing in between. He pointed out into the distance and said that he was building a city out there. Now there’s a city.”

The above anecdote, which a long term expat told me, sounds like a good intro for the story of modern China. Brand new cities are popping up here just about everywhere, connecting rapidly expanding existing cities together into truly massive urban zones. At times it seems as if the entire east of the country is combining into one massive metropolis from Harbin to Guangzhou: an experiment in urbanization unlike any that has been played out on planet earth before. 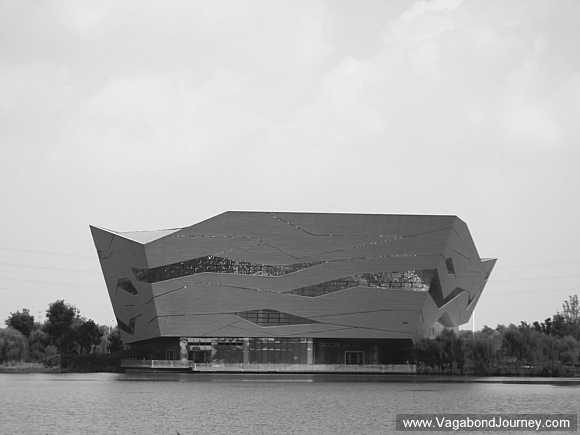 #China has built 500 new cities since ’78; see how they use city brands & slogans to promote themselves @chinastoryblog ow.ly/dBFUa

China must be an engineer’s dream. I don’t think that any other country has ever provided their city planners, civil engineers, and architects with so many blank canvases upon which to paint brand new cities. It has been reported that China has constructed 500 new cities since 1978. The country now has over 100 new cities in the works and is projected to build 400 more by the year 2020 — and these numbers do not even include the connector zones and “suburban” housing developments which litter urbanization into the voids between proper cities.

Eastern China seems to be transforming into one big city. The dots on the map depicting urban areas are expanding, cannibalizing their neighbors and becoming mega-cities. In between these areas of rampant urban expansion, new cities are being erected. It is not absolutely insane to predict that at some point in the not too distant future all of these dots could be connected from the north to the south of the eastern part of China, and form a picture of what urbanization means in the 21st century. 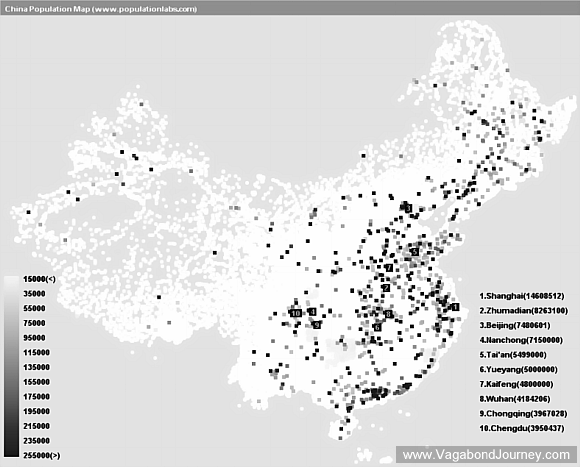 As I write this there is a project in works in the southeast of China that will smash all records for the size and population of a metropolis. Called the “Pearl River Delta into One” plan, it will merge the already giant cities of Guangzhou and Shenzhen together, and Foshan, Dongguan, Zhongshan, Zhuhai, Jiangmen, Huizhou, and Zhaoqing will be incorporated into the mix. This monster city will have a population over over 42 million people and will be the size of the Netherlands, or 34 times the size of New York City. Projected to be completed in six years, it will be a 16,000 square mile urban onslaught.

Beyond the hype about this project, the reality is that this mega-city pretty much already exists. The above mentioned cities have already sprawled out into each other organically, and there is pretty much no clear way to tell where one ends and another begins. For all intents and purposes, the “Pearl River Delta into One” project is just a plan to merge these cities’ municipal utility and transportation services together in a megalopolis that has taken on a life of its own. 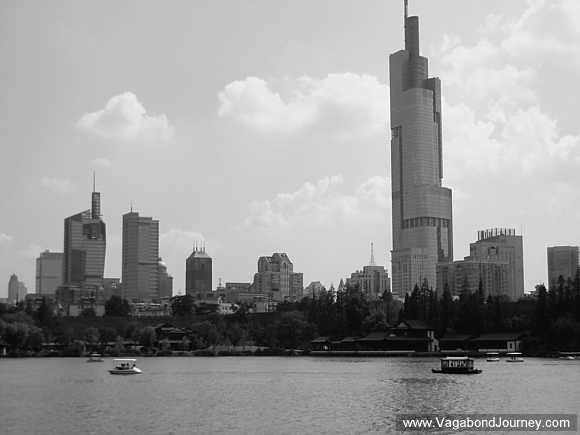 Of course, this is not the only mega-city that China has or will have in the future. It’s predicted that by 2025 China will boast over 220 cities with populations over one million and eight mega-cities with over 10 million people each.

The making of new cities

“Right now, there are only about 50,000 farmers in the industry zone, but our next aim is to build a new city with a population of one million,” Wang said. “Starting from zero, it will lead the way not only as a demonstration zone for industrial relocation, but as a model of labor transfer,” ran a quote from a China.org.cn story — a statement that is being repeated many times over as new cities are built all over the country. 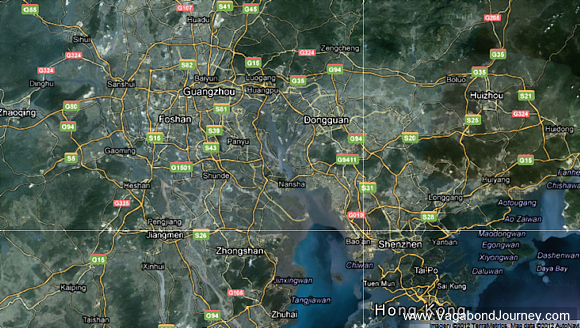 China is on the verge of an urbanization movement like the world has never known before. On the forefront of this mass movement is the new city. What is a new city? Well, it’s an urban area that is planned out and built up virtually from scratch. Stake out an area of land, remove the farmers and anyone else living on it, demolish all the buildings, and viola, a perfectly blank canvas upon which to paint a city.

Building entirely new cities from scratch is perhaps an estranged concept in the West. For us, cities are entities that seem fixed in place and permanent: you can reconstruct them, expand them, rezone them, or alter them, but clearing out an area and building an entirely new one, well, that is just not something we really do too much anymore.

But this has become a regular part of life in China: outside of just about every established city, expansion projects and satellite cities are growing like weeds. As the country’s big cities become congested and choked by their own success and development, new urban sectors are popping up around them to relieve the burden of a bulging population and unchecked migration. As a hermit crab discards its shell and finds another when things get too tight, the new cities of China act as pressure valves, as they help release the stresses being put upon the country’s major urban centers.

Like how colonists or victorious generals throughout history would plant their foot on a piece of barren ground and say, “I will build my city here,” China is clearing out vast amounts of underdeveloped areas for urbanization projects. Besides being fertile ground for profit and rising the national GDP, the new city serves two primary functions:

A) They are built for migrants gravitating towards urban centers from rural areas. It is reported that 300 to 400 million more migrants will move into cities in China over the next 15 years. Combine this with the 691 million who are already urban dwellers, and you are going to need some more cities.

B) They are built for the upper and middle classes who wish to migrate away from major urban centers. Nobody likes smog, heavy traffic, cramped living conditions, and paying more for housing than what it should be worth. So many Chinese are moving into new housing/ urban developments outside of major cities where they can live in more affordable apartments, raise their standard of living, and, overall, exist in a healthier environment.

Many of the new middle/ upper class urban developments in China are sometimes called “car cities,” as, bluntly speaking, they are built with automobile transit in mind. They invariably have super-wide boulevards, incredible bike lanes, massive sidewalks, pedestrian over and under-passes, parking areas, a squared up street grid, and a very clearly laid-out traffic pattern. In these places, humans and cars get along symbiotically, the entire scheme is as if it has been designed by a higher engineering power.

These new cities have the advantage of being completely designed on a single, cohesive plan, by a coordinated group of urban planners and engineers. All the pieces fit together, and the outcome is very much like SimCity turned into reality. The effect is often startling: these cities tend to be truly nice places to live.

The rebuilding of old cities 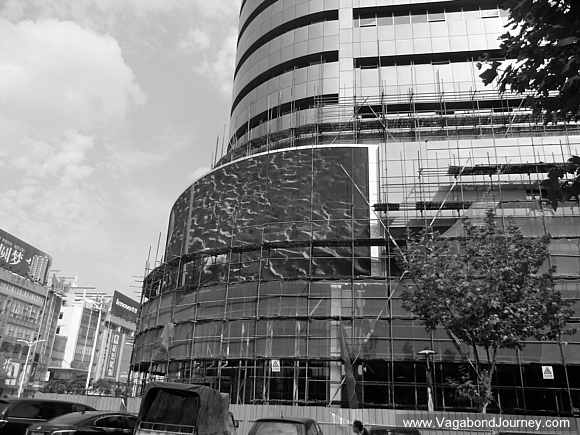 Taizhou, an old city, is being rebuilt

I talk about new cities here, but for anyone who has been around China, it is clear that there is rarely such a thing as an old city. Sure, there are plenty of cities here that are thousands of years old and parts of Beijing, Shanghai, Hangzhou etc . . .  have buildings that have been standing for hundreds of years, but the bulk of even these historical urban centers have been gutted and completely redone within the past few decades. What “old city” really means in China is a new city build on the ruins of its predecessor.

It’s almost as if China is treating it’s old cities like an obsolete computer: rather than continuously updating old software and repairing an endless string of problems you just chuck the entire unit and buy a new one — and to make up for the years of hassles you go for a model that’s state of the art in every way imaginable. I’ve walked through many “old” cities here that are full of recently built, super-modern buildings, large, freshly paved boulevards, and have a newness in their appearance and feel that there is virtually nothing that hints that these places are over a decade or two old, let alone two millenia. China has built themselves an entirely new country.

However they’re built, modern cities in China are works of art, they are often all out urban masterpieces.

To say that modern Chinese cities are futuristic would be an understatement: they ARE the future. What I’m looking at in China: the skyscrapers, the oddly assembled geometric buildings, the super wide boulevards, the way the hues of the buildings to blend together with their landscape, and the stark nakedness of it all seems like a sci-fi movie set. When walking down a street of a well-done modern city in this country I almost expect a robotic voice to call out to me from a loudspeaker and say something to the effect of, “Welcome to the future, everything is perfect and lovely here.” There is definitely something Singaporean about the direction urban China is heading.

But there is an underbelly to all of this urbanization and development, such as ghost cities, the much anticipated housing bubble, and the gloomy prospect that China’s economic upturn may soon level off or even drop hard. Whether China is building itself a utopia or setting itself up for dystopia nobody can tell. All we can do is ride the wave and find out where it’s going later.

We will continue to focus on the issues related to China’s continued urbanization on VagabondJourney.com, as The New China series continues.

« Why do the Chinese Hate the Japanese?
Huaxi, China: A Journey to the World’s Richest Village »