You are here :Home Articles Easter In China

At the sight of me approaching a pew full of extremely old ladies stood up and gave me their seats. There was no protesting, no acting chivalrous, I had to sit down. I felt like an ass: I had just run an entire group of elderly women out of their seats — in church, of all places. This didn’t happen because the ladies didn’t want to sit next to a foreigner or anything like that, but because they just wanted to be welcoming. One woman, who had to have been over 70 years old, got up and gave me her seat, but her friends also wanted to show me hospitality, so they mimicked her example.

So there I was, in an overcrowded church on Easter Sunday, with an entire pew to myself.

Luckily, after the gesture was complete, some of the old woman returned to their seats, and that awkward feeling of being on the receiving end of a generous act of self-sacrifice subsided.

I was in the Christian church in Taizhou, a rather insignificant city in Jiangsu province of China. In the early 20th century, Pearl S. Buck’s father used to ride a donkey here from Zhenjiang, 50 miles away, to preach and convert. Judging from the amount of people in this church on this Easter Sunday, it was evident that legacy of Absalom Sydenstricker and his missionary companions has lasted. Every pew was full, and there were people standing around the periphery of the nave. It was truly standing room only here — well, unless you happened to kick an old lady or two out of their seat. 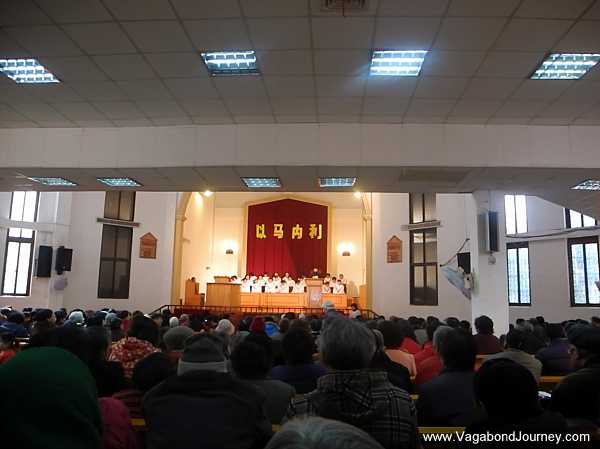 This church was built in the same style as they are in the West: wooden, high, long, with a roof like a barn, and a steeple that’s topped with a giant cross. It was old. I don’t know how old, but it was built long before the Communist era.

I looked around at the gathering, and could not help but to notice its advanced age. At least 95% of the people in the church had to of been over the age of 60, and most appeared far older than that. The place was like a a nursing home of the spiritual. Most of the congregation also seemed to be peasants, or at least newly urbanized. They were what the Chinese once referred to when they said “the people.” This told me one thing:

These were not the trendsetting, young, middle class, liberal, internationalized brand of Christian that’s popping up all over Asia, these were members of an older guard of Chinese Christianity, the inheritors of a tradition that stretches back for hundreds of years.

Christianity has been in China since the seventh century, but really gained steam in the 19th and the first half of the 20th century when foreign missionaries were permitted to flood the country. While Mainland China is not often thought as a hotbed of Christianity — or any religion for that matter — there are actually more Christians here than there are Communist Party members. In 2008, the Economist estimated that there are more active Christians in China than in any other country in the world.

During the ideologically extreme phases of Mao-run China, Christianity went behind closed doors, churches were closed and vandalized, and followers of the cross persecuted, but the faith didn’t really go anywhere. In this current era, that door has reopened, and though thousands of “house churches” still operate, many of the big, proper churches have been returned to service.

Though I have to add here that though many churches across China have been reordained as holy places, some continue to serve other purposes. Just because a building looks like a church here, doesn’t mean that it still is. I recently walked into a large church in search of pews and an alter but only found bedrooms, laundry hanging everywhere, and people wondering why I was stomping through their apartment complex.

The service Easter service itself was likewise different than what I’ve become accustom to observing in Christian churches — even in China. I’ve been to church here before, but never in a quasi-rural, culturally traditional type of place. There was very little praying during this Easter mass, but there was a lot of sermonizing. On and on and on, the preacher talked. I had no idea what he was saying, and, from the looks of much of the congregation, it didn’t seem to matter very much that they could. Many seemed to welcome distraction, and being the only foreigner in the place, I provided one. But I was not the only person disrupting concentration on the sermon. There were kids running around and people were walking in and out of the doors. The feel and mood was very laid back, informal, tolerant, live and let live — very Chinese. The preacher wore a nylon, zip up jacket and slacks like everybody else. 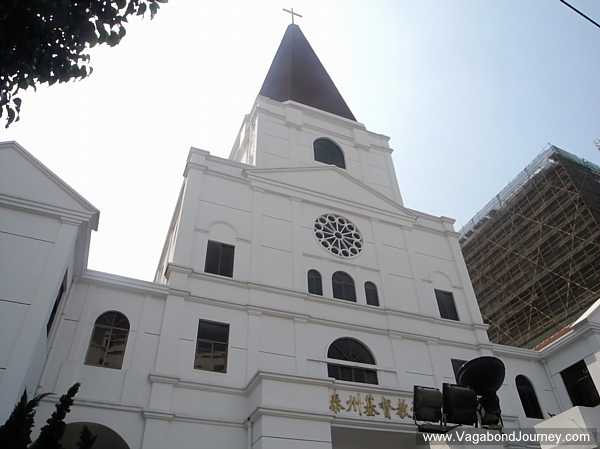 What struck me as truly interesting was that there was no altar crucifix. In fact, many of the decorative and worshiping elements that are usually on display in churches were conspicuously missing. The church seemed overtly bare, perhaps as bare as the day the Red Guards more than likely swooped through here forty years ago. The only decorations were the white cloaks that the choir wore and the cloth white covers on the electric fans had little red crosses embroidered upon them. I am unsure whether this material austerity was because this was a government approved church, or if it was just felt that spiritual aids were unnecessary. I’m guessing the former.

The one way that this church did go all out was with the choir. It probably had two dozen members, and they stood in two rows behind the altar. As the preacher spoke they stood at attention. When the mass ended, the congregation all rose, and the choir belted out a rather intense piece of song. When they finished, there was a mad rush for the door — China style.

It is my assumption that I was in a Protestant church. When asking people after the service about their religion, I used the term Jīdū jiào (基督教), and was not corrected. I initially understood this to be a general way to refer to Christianity, but later found out that it is often taken to mean Protestant. Catholics are called Tiānzhǔ jiào (天主教), and other denominations likewise have their own titles. Also, this was a formal church, and was more than likely a part of the Three-Self Patriotic Movement, a Protestant Christian organization that is headed by the Chinese government. 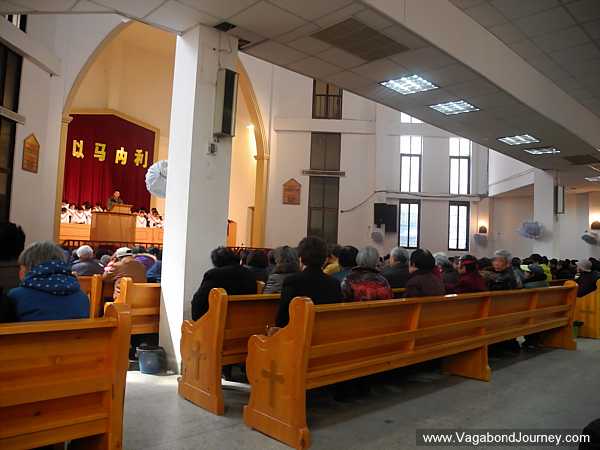 As far as I’ve ever been able to ascertain, Chinese Christians appear to have the right to practice freely — provided they don’t become politicized, too public, or organize for reasons other than worship. Though reports of Chinese Christians being persecuted are often aired in the international media, there are often more to these stories that go unmentioned. When it comes down to it, the government of China seems to have bigger things to worry about than its people kneeling before crosses and praying. From Christianity Today:

Of the nearly 5,000 Christians reported by China Aid to have suffered persecution in 2012, more than two-thirds were involved in cases where one or more of the above triggers were present. These Christians were either engaged in activity which the government perceived as a threat, or they ran afoul of the economic or political interests of corrupt local leaders. Examples of the former include Christian dissidents, human rights lawyers, and those who attempted to utilize public space for Christian activities . . .

Many more people in China, religious or not, face the same consequences for engaging in similar activities. The larger issues here are an authoritarian regime that is obsessed with maintaining stability at all costs, an immature legal system, and a very well-resourced security sector that has become a law unto itself. All Chinese, whether Christian or not, are suffering the consequences.

The concern on the part of the Chinese government is not over the religious aspects of Christianity, but over the fact that groups could organize outside of the ideology of the Party under the cloak of religion. This is especially true of those that can easily become affiliated with foreign entities. The Chinese government is obsessed with inhibiting grassroots political movements, and just so Christian groups steer of anything that could be interpreted as political — just so they don’t seek foreign solidarity or connections, just so they don’t publicly proselytize or show their colors on public property, just so they don’t embarrass any government officials, and just so their churches don’t fall within the path of unscrupulous developers — they will more than likely be left alone and permitted to practice freely. Even unsanctioned and illegal house churches are relatively rarely raided or shut down by the authorities. 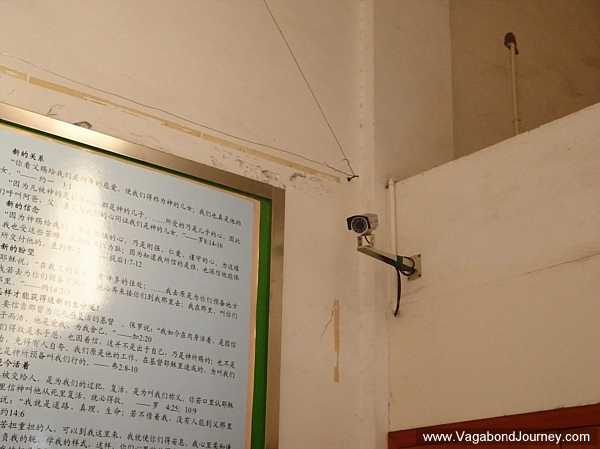 The church in Taizhou only had a single surveillance camera in a corner of the narthex which was pointed at the door that lead into the nave. This amount of government surveillance is absolutely normal in China, and is no greater than in any hotel lobby, KTV joint, dance club, theater, or elementary school. When in China, you’re on camera, no matter if you’re going to the mall or going to church.

I was granted free access to this church in Taizhou, and, because of that, I’m not sure if I was allowed to be there. Like in some other social spheres, such as hotels, there is a line of segregation between foreigners and the Chinese populous. In China, foreigners are permitted to go to English language foreigner churches, Chinese people are permitted to go to Chinese churches. To go to a foreign church you need to produce a foreign passport at the door, but, apparently, to go to a Chinese church you can just walk right in. Like with hotels, the lines of segregation that separate Chinese nationals from foreign residents are easy to blur.

Foreign involvement (real or perceived) [in Chinese churches] will greatly increase the chance of activities being restricted. The presence of foreign personnel or funds suggests to Chinese officials that these activities are being engineered or at least supported from abroad, perhaps for political ends. Christian groups can run afoul of the government by receiving foreign funding, allowing foreigners to preach or teach, or utilizing overseas entities as a mouthpiece when they face government pressure.

As everybody piled out of the church I tried to make conversation with some of the congregation. I found a single group of younger looking people and approached them.

“Is it difficult being Christian in China?” I asked.

“No, not at all,” one guy answered in English, as though my question was ridiculous.

In the context, this simple question did seem a little nonsensical: I’d just sat through an Easter mass that hundreds of people attended without any fear, trepidation, or any overt sign of government intervention or excessive monitoring.

“Before, many years ago, was it difficult to be Christian here?” I rephrased my question.

“Maybe it was a little difficult before,” he replied, “but now it is very popular.” 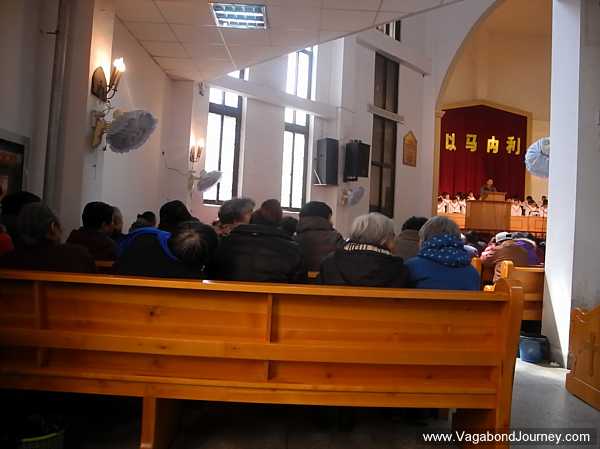 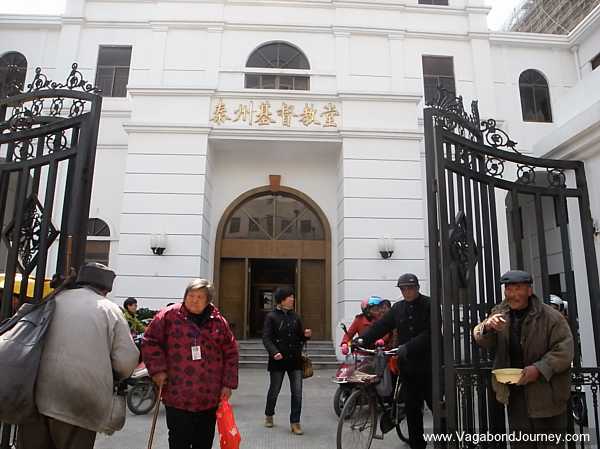 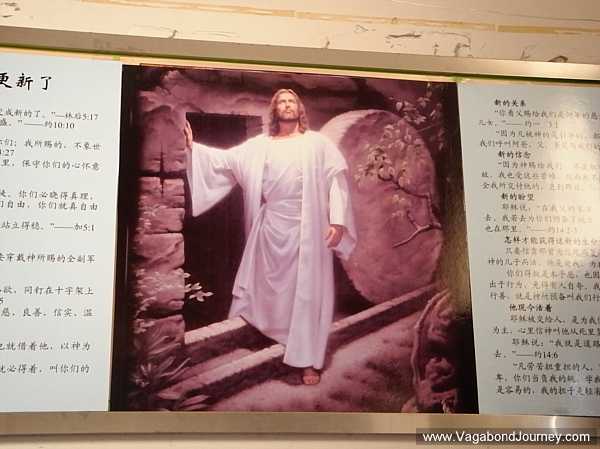 This was one of the only religious images in the church. 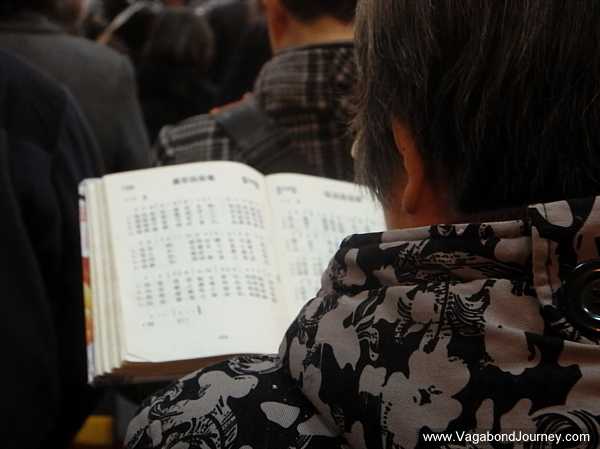 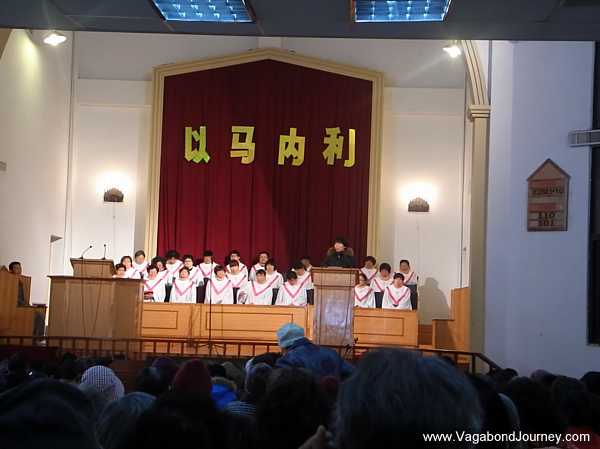