You are here :Home Art and Music Cosplay in China

Throngs of high school and college girls were lined up for half an hour or longer to see men and women dressed like cartoon characters. When the members of Silence Snary came walking down and took their seats at a table, their fans exploded with applause. Some were there to see the team for their second or third time. That was the scene at the Tomo expo and music festival in Nanjing.

Cosplay has become more and more popular in China with the popularity of Japanese cartoons. Fans like to dress up like their favorite characters and take pictures. Some of them form teams and become so popular that they can sell books and posters and go on tour. After Silence Snary sat down, the girls at the front began jumping up and down and pulling out cameras and taking pictures of the man dressed in Ming Dynasty style and his fellow team members. What’s with all this excitement for essentially year-long Halloween costumers or amateur wuxia actors?

“I think it’s boring,” said a high school girl who was dragged along by her classmate. No, her friend corrected her, the cosplayers (or “cosers”) are beautiful and hardworking.

“Cosplay teams have to look very handsome,” Li Jing, a college student said. “They take pictures and movies to share with their friends.”

They produce all kinds of products, including photo books, posters, and videos. Silence Snary even produced a strategy card game using their own photos for the pictures of the characters. Their fans, who seemed to be about 80 percent girls, had products with them that they wanted to get signed. A lot of them had originally discovered the team on Weibo, where they have 130,980 followers. 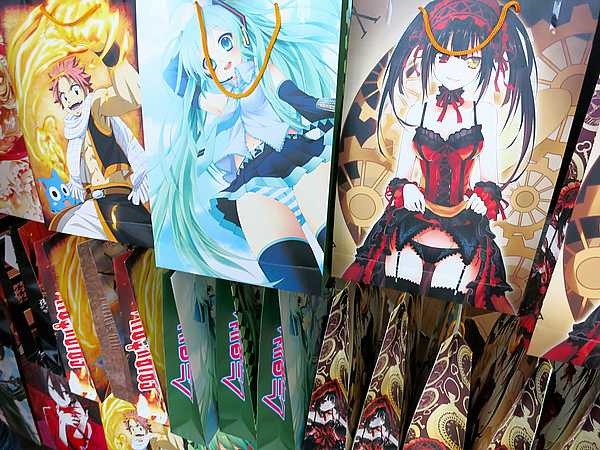 At another table, with cardboard cut outs of each of the members on display, the new cosplay team Cosmos was even signing stuffed pillows their fans had bought nearby. For some reason, their fans also liked gifting them team members with alpaca-like stuffed animals that looked strikingly similar to the legendary Chinese cao ni ma (“grass mud horse”). When I asked if those alpacas were real Chinese animals or joke animals, the Cosmos fan who was acting as the team’s volunteer media liaison steadfastly denied my contention.

Cosmos formed in May of this year and has attended about 20 events so far, said its team leader, who calls himself Yi Shuai, which means roughly “Yi Handsome”.

Dressed in light teal suits with white trim, well-coiffed hair, and wearing colorful contact lenses, the members looked sort of like what I would envision the men of a Guo Jingming film to look like if I ever saw one. The member Niu Niu even had his hair dyed brownish like Guo Jingming.

Yi Shuai has been doing cosplay for 13 years. He says you can learn a lot from doing it, like makeup, dancing, singing, and physical form. Part of the act is to take the stage and put on a performance, dancing and signing, or doing a play with the characters you are dressed as. Teams usually dress like characters in cartoons, video games, or novels, but sometimes they create their own characters. Silence Snary even had one member, Fu Shu, dressed as a character from an internet novel, “Quanzhi Gaoshou” (“Full-time Master”), and they made their card game based on the internet novel “Feng yu Jiutian”. 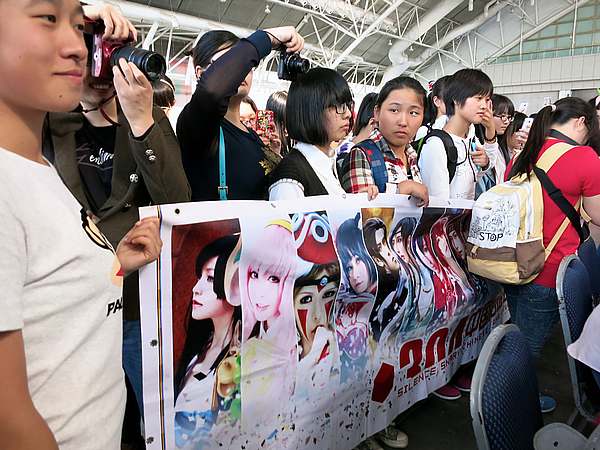 Broadly speaking, “cosplay expos” are events that attract a lot of people dressed as anime-style characters, but there are different kinds of expos. Cosplay has a relation to video games, anime, comics, science fiction, and such, and can be found at any related expo. The Tomo expo seemed to be more focused on music, as there was a concert scheduled for that night and some musical performances on the stage. There were also a lot of anime posters and models on sale. Tomo must be one of the few places you can find such a love for Japanese culture in Nanjing, the site of a massacre at the hands of the Japanese military during WW2 that left 300,000 people dead.

The biggest cosplay expo in China (and, it brags, in Asia) is the China Digital Entertainment Expo & Conference, or ChinaJoy. ChinaJoy started in 2004, and now it draws about 200,000 visitors a year to its annual expo in Shanghai each July. It is mostly focused on video games.

While ChinaJoy is a lot more popular than Tomo, attracting nationwide and even international guests, Tomo did seem to have more amateur cosplay enthusiasm from its mostly Nanjing crowd. By contrast, the showgirls at ChinaJoy get more attention than the cosplayers. Each video game company shows off the most gorgeous showgirls they can hire to enraptured male nerds, but it is questionable whether those men, distracted as they are by breasts and legs, will remember the names of the games the girls are ostensibly promoting. At Tomo there was a much larger proportion of expo-goers dressed up themselves in anime costumes.

“I like cartoons,” is the reason most people dress up as characters. Some of the semi-professionals — those on teams — said that dressing up can make them feel like the characters. “I want to become those characters,” said Niu Niu of Cosmos team. There must be some element of showoff to it, as well. Cosers with pretty costumes get swarmed for pictures at events, and the teams have adoring fans lined up forever to get autographs. The most popular teams, like Team CSL from South Korea, can even get invited to represent video games at ChinaJoy, as CSL did for “Cyphers” in 2013. 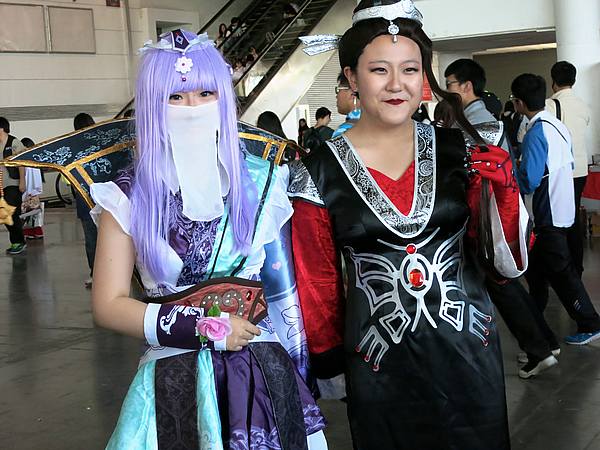 At the end of Tomo, Silence Snary moved to a table at the front with its fans who didn’t want to leave and played a tournament of their card game with their fans. Silence Snary, also known as Hangzhou 304, was one of the first cosplay teams in China. They formed in 2001 as a group of friends who liked cosplay. “We started playing outside with others, and then there started to be some expos,” said one of the leaders, Xiao You.

“We started by adding friends online and sharing cosplay culture online or in real life with our friends. When we started we never thought about allowing people to purchase our items, but then when we got a lot of people’s support we gradually decided to make even more beautiful items and sell them,” a Silence Snary representative added on Weibo. Each year, they participate in over 100 events. In 2007, they won the “Best Visual Effects Prize” at ChinaJoy, and they have also been to events in Vietnam and Russia.

As they played cards, their fans encircled the table. Some of them were holding up a Silence Snary fan club banner. I interviewed one of their members, Fu Shu, away from the table who was quickly swarmed by fans wanting pictures. While a girl posed next to him, another girl pulled out her smart phone and snapped a picture of me.

“Why are you taking my picture? He’s the celebrity,” I said.

On my way out, I passed some workers at the event who started speaking Chinese and laughing. “This is the first time I have spoken to a foreigner!” a girl gushed to her friends. A chubby boy tells me his sister wants to take a picture with me. 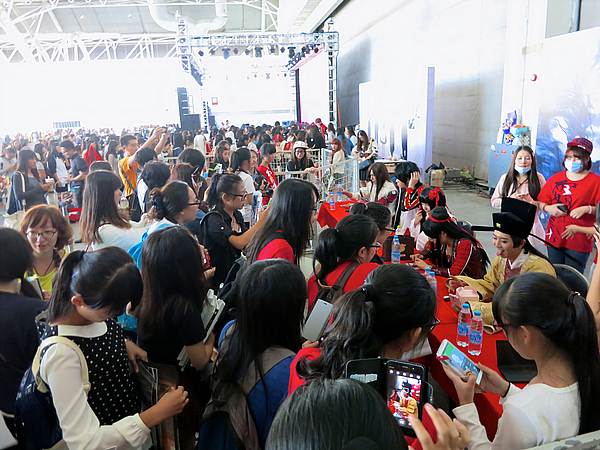 In the first episode of “The Melancholy of Haruhi Suzumiya”, the main character giving her class introduction at high school says, “I’m Haruhi Suzumiya from East Junior High. First off, I’m not interested in ordinary people. But if any of you are aliens, time travelers, or espers, please come see me.”

In a world where most people sit in front of computer screens all day in offices or stand behind checkout counters in stores, where old villages are being knocked down to make way for uniform malls, where legendary wuxia fighters and generals, to the extent that they ever existed, are a part of the past, I can see the allure of cosplay. 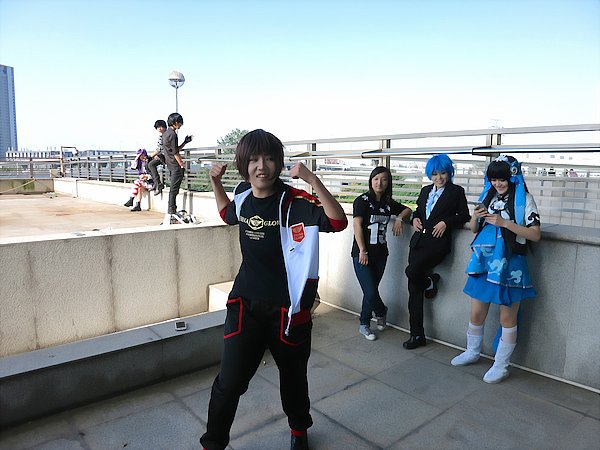 « China, Taiwan One Country Two Governments is Happening
11 Chinese Cities That Are Built on What Was Once Water »