You are here :Home China Not Deserted! This Chinese Ghost City Is Peopled

Erenhot, Ordos, Zhengdong, Bayannaoer, Changgong, Dantu: new Chinese cities that have gained infamy for being built but never inhabited. They have been ominously dubbed as “ghost cities,” failed development projects on metropolitan scale. It is estimated that China has built over 500 new cities since 1978, and plans to complete hundreds more by 2020. This is a new model for urban development, one that has perhaps never been attempted before in human history on such an extreme scale.

These new cities, which are often zoned as new districts of existing municipalities, are built up from scratch, topped off with public works infrastructure, schools, government buildings, stores, malls, massive amounts of housing, universities, and sometimes even stadiums all before a single resident moves in. Rather than building up cities gradually and adding infrastructure and housing on an as-needed basis, China is building cities all at once in singular blasts of development. The benefits of this urban development strategy are obvious, as an entire city can be built on a single, continuous, fully integrated plan, but the risks are absolute: if the project fails, an entire city goes under.

Most of these new districts are inhabited and become living metropolitan centers, and nobody outside of China ever hears about them, but others are left as eerily uninhabited, post-apocalyptic no-mans-lands: cities with everything but people. 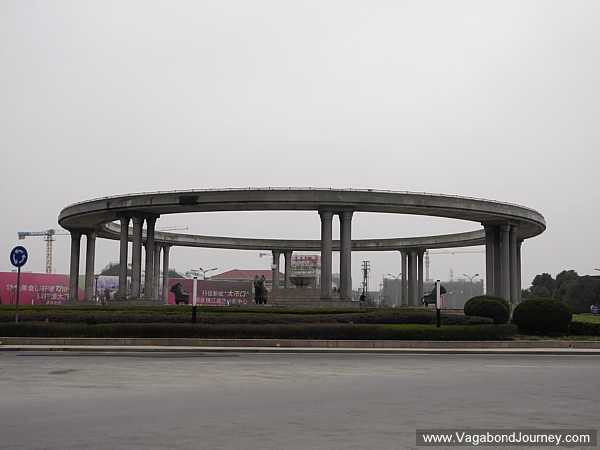 In 2010, China’s ghost cities began making headlines around the world. These reports revealed the empty buildings, the deserted streets, the stillborn carcasses of cities that never knew life which have popped up very quickly all over China. These ghost cities were shown as indicators that China’s development bubble is about to burst and as signs that the country’s overzealous, pedal to the metal pace of development is starting to catch up with it.

In the world’s most populated country, where people are often packed into their cities like chickens in a factory farm, entire cities without people seem like a sick twist of irony.

The irony gets deeper when it comes to light that many of China’s “ghost cities” may not inherently be signs that the country’s economy is faltering. The residential properties in many of these new cities are often grabbed up by real estate speculators like stocks at an IPO of a much buzzed about company. These speculators often buy large numbers of properties in cities they have no intention of living in, and in the process drive the prices up higher than what many prospective residents can afford. So, temporarily at least, real estate investment in many of China’s new cities actually inhibits their population growth rate. The effect is that there are millions of new apartments are left vacant in a country where the need for additional housing is actually high, and many new developments likewise come off looking like ghost cities. 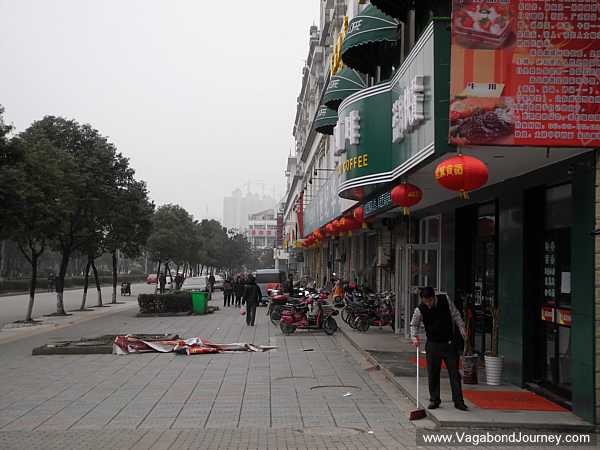 The streets have people in them

I began an investigation of China’s ghost cities and White Elephants at the New South China Mall in Guangdong province and then traveled to the Dantu New District in Jiangsu. I wanted to find out if China’s ghost city phenomenon is merely a temporary stage in the vitalization process of some new cities or if it is a sign of an impending doomsday.

Are these places ghost cities or are they new cities in the process of being populated?

That was the question that I wanted to answer, and the best place to do this was at Dantu, which was one of China’s first “ghost cities.”

“The ghost city of Dantu has been mostly empty for over a decade,” Business Insider reported in 2010. “In most neighborhoods of Dantu, there are no cars, no signs of life,” reported the Daily Mail.

I traveled south to the Dantu New District from neighboring Zhenjiang, an old city on the bank of the Yangzi river that has a history of over 2,500 years. Currently, these two urban centers are separated by a thin range of hills, but they are being connected at a rapid pace by a corridor of new developments. The entire area will soon be a contiguous metropolitan area. As I traveled along this 11 kilometer stretch between the two cities, I observed patches of high-rises going up near and far, a new elevated highway being built, and nearly all of the old villages that were once located on flat, easily develop-able land were already bulldozed and shipped away in dump trucks. As it stands now, this area is a wasteland of fenced off construction sites, heavy machinery, and dust, but this will not last for long. China isn’t just building new cities, but is expanding existing ones, and the two often meet in the middle. If Dantu New District really was a ghost city, it certainly hasn’t been forgotten. 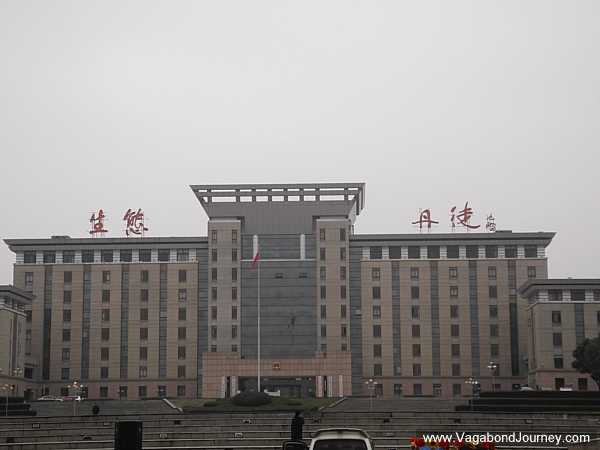 Government building is in front of a giant, long pond which is easy to locate on satellite images.

I turned off the highway onto an avenue that lead into the heart of central Dantu. A massive apartment complex rose to my right, and the laundry hanging outside of many windows caught my attention. The t-shirts, sheets, towels, trousers, and undergarments flapping in the breeze were essentially flags that said “people live here.” On the other side of the street rose a high rise for Zhenjjiang’s transportation authority, a row of shops, and, farther down, the concrete frame of a shopping mall that was still being constructed. A woman on an electric bike, a strolling elderly couple, and a fast walking man in a business suit moved by me as I surveyed the scene. Right away, Dantu seemed conspicuously inhabited for a place billed as a ghost city.

The deeper I traveled into Dantu, the more it became evident that it wasn’t vacant in the least. The great majority of the commercial retail spaces had operating businesses in them. There was the usually assortment of noodle houses, junk shops, quicky marts, cigarette stalls, liquor stores, cafes, and vegetable markets that are in every Chinese city. Most of these shops had their doors open, had people working inside, and some even contained a shopper or two.

The streets of this city could not boast of the foot traffic of Shanghai’s Nanjing Dong Lu or the amount of vehicles that clog the avenues of a fully developed Chinese city, but there were both pedestrians and cars wherever I went. 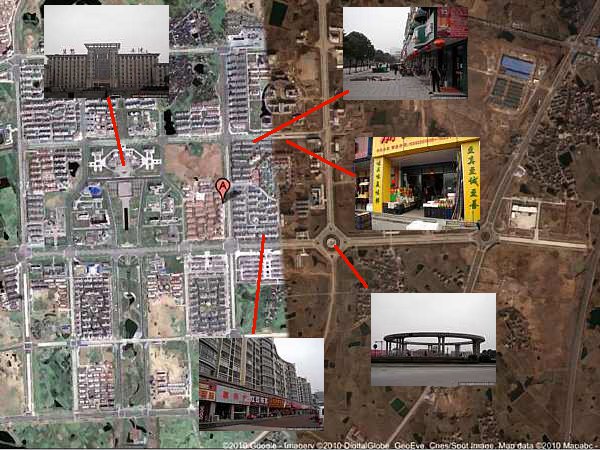 Dantu: then and now. Satellite image that was used as evidence that Dantu was a ghost city in 2010 overlaid with photos of how it is now.

I stood in front of the municipal government building, and felt the need to double check myself. What I was finding in Dantu was incredibly inconsistent with previous media reports that I’d read, and I wanted to be absolutely positive that I was in the right place. I took out my phone and pulled up the infamous satellite images that showed Dantu as being uninhabited just three years ago. I found the long, rectangular pond on the map that I was standing right in front of, and I knew that there was no mistake: I was in the center of what was once a ghost city.

There was nothing eerie, strange, or out of the ordinary about this place. Though there was a lot more elbow room here than in most Chinese cities, there were people everywhere. Dantu isn’t yet thriving by any means, but uninhabited it is not. Though it took the better part of a decade, this district was making the transition from ghost city to living city.

I entered a noodle house that was just emptying after the lunch hour rush. I sat down at a long wooden table and pushed aside some dirty dishes that were not yet cleared away. I called out to waitress to bring a bowel of noodles, I then sat back and watched the end of an NBA game on the television. What was remarkable about Dantu was how unremarkable it really was. My daydream of traveling into a post-apocalyptic landscape, of visiting a city without people, was usurped by the reality that China is conducting the greatest urbanization experiment that has perhaps ever been attempted. This country is creating planned cities in droves, connecting them into megalopolises, and growing them into living cities. Though some of these new developments are taking longer than others to come to life, it’s my impression that it’s usually a question of when, not if.

Dantu is no longer an eyesore in the menagerie of China’s broader development scheme, it is a evidence that an initially stagnant new city can eventually gain enough inertia, business, and residents to come to life. What I found there was a place not unlike thousands of other new developments that are spread all across China. Dantu should be crossed off China’s list of ghost cities: they pulled it off.

I have to ask if this is the same model that Erenhot, Ordos, Zhengdong, Bayannaoer, Changgong, and dozens of other severely under inhabited cities across China could eventually follow? Maybe we’ve spoken too soon by calling these places ghost cities. 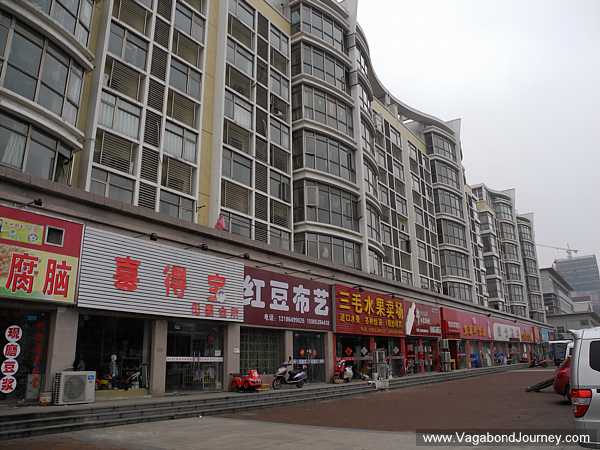 There are shops open in most retail spaces 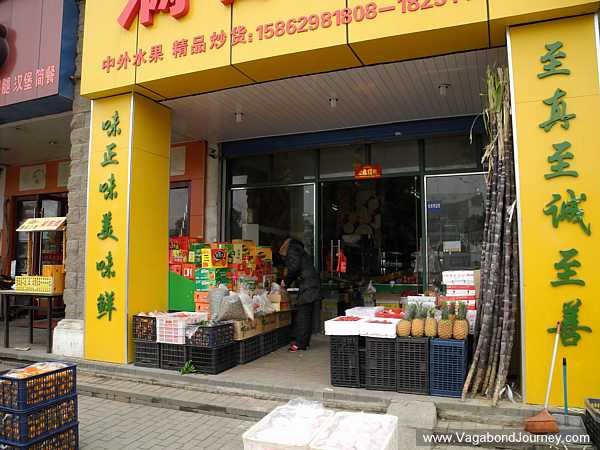 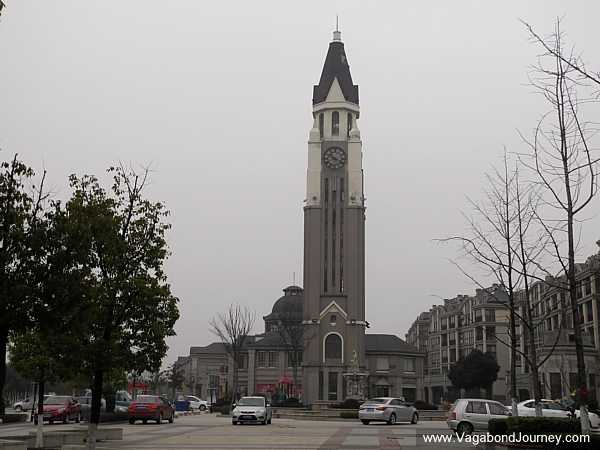 There are cars here too 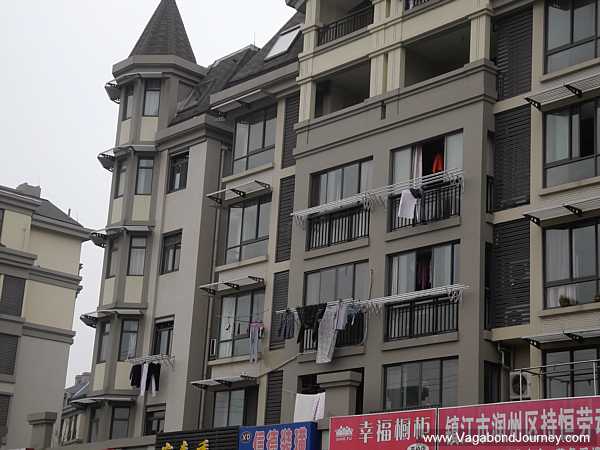 Laundry hanging outside windows show that people live inside