You are here :Home Articles Another Bridge Collapses in China

The Tinghe bridge of Houxiang town in China’s Jiangsu province collapsed on October 21st. A truck full of stones attempted to cross and the bridge gave way, sending the truck and a woman on an ebike plunging into the Zongxin River below. Nobody was killed — the driver of the truck was able to save himself and the woman — but the incident again raised a question that’s being asked all over China:

Why are so many bridges collapsing? 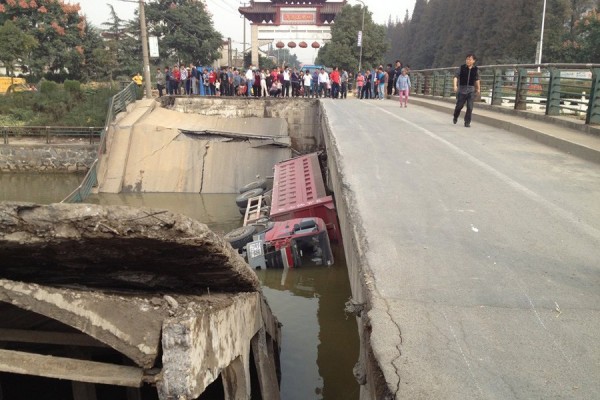 I rode into Houxiang to take a look at the ruins of the Tinghe bridge for myself. By the time I arrived, five days after the collapse, clean up crews had already removed a large portion of the debris, all that was left was a vacant cavity where a bridge once stood. Looking upon this empty space was like talking to someone missing their front teeth: it’s what’s not there that commands your attention.

This bridge was a two piece fixture, there was one lane for traffic going one way and another for opposing vehicles. Each side had it’s own supports, and only one gave way. The other side was still standing, and it was easy to see what the collapsed portion once looked like. To be honest, the supports on this bridge appeared far frailer and thinner than on the other bridges spanning this river, the entire thing looked conspicuously shoddy — as though it was not built for industrial traffic. But there was a large factory on one side of this bridge and the downtown area of Houxiang was on the other — so it was my impression that cargo and supply trucks passed over it often. 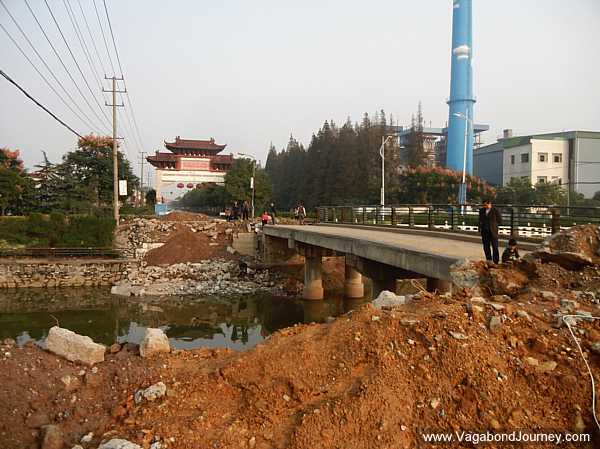 I stood on a debris heap with a group of villagers that seemed to have been permanently drawn to this area since the bridge collapsed. They milled about talking, hanging out, gossiping, as though they ware at the town’s newest attraction. There were children and old people bent over the remaining. They were apparently employed to smash larger chunks of concrete into smaller chunks of concrete with crude, makeshift hammers. I watched as they hammered away, and chatted with the villagers about the collapse.

The local officials say that the reason the bridge failed was because the truck was overloaded. But this is what they usually say when a bridge collapses in China, which runs in accordance with their tendency of blaming an individual rather than facing a problem with the society.

Empty cavity of the bridge that collapsed in Houxiang. 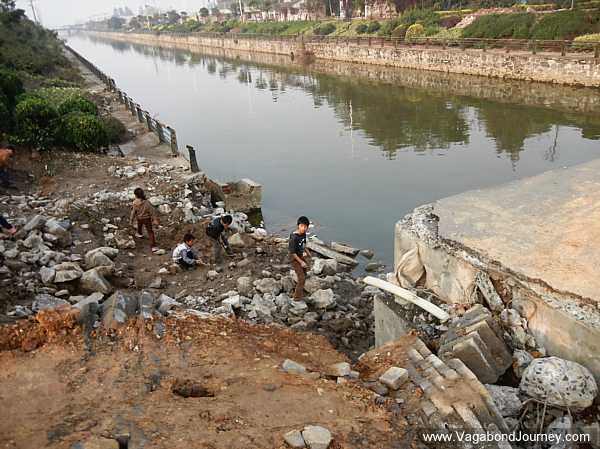 Kids smashing up the debris left by the collapsed bridge.

This was not nearly the fist bridge to collapse in China recently, and public works projects falling down or otherwise failing has become a major issue throughout the country. When a bridge collapses here, the words “corruption” and “embezzlement” fill the social media air as possible explanations. While it is rarely proven that officials are pocketing money allocated for public works projects by speeding up production and using substandard building materials, it’s widely assumed — and when these projects prematurely fail these rumors turn into war cries.

Since 2007, China has experienced at least 18 major bridge collapses, and I’m unsure if this number even includes small bridges like the one I just visited in Houxiang. 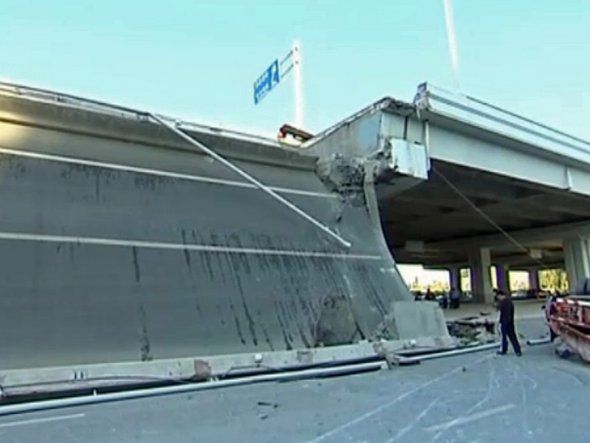 This past August, a 330-foot-long section of a ramp leading up to the eight-lane Yangmingtan Bridge in Harbin collapsed. This bridge was only in operation for eight months. 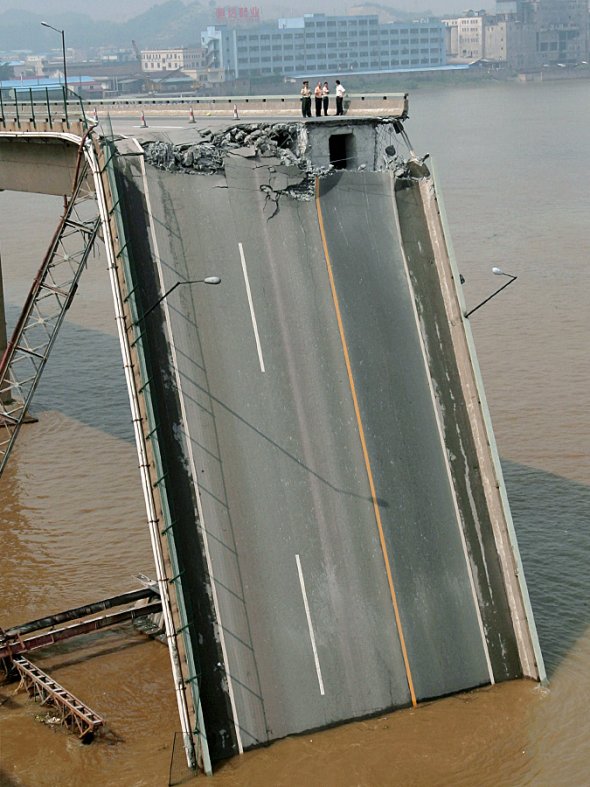 On June 15, 2007, a section of the Jiujiang Bridge in Guangdong province fell down after it was hit by a boat. 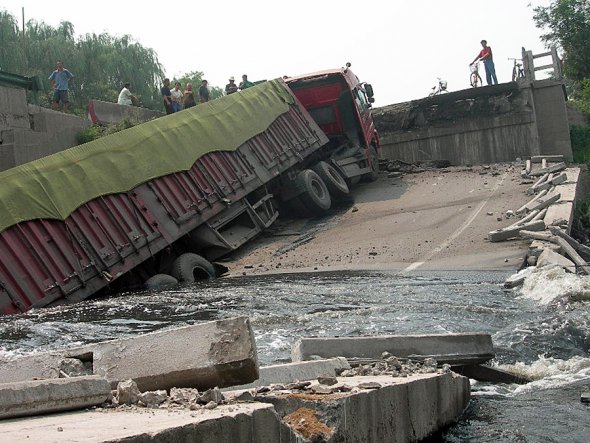 On August 16, 2007, a truck carrying iron powder caused a bridge to collapse in Taiyuan, Shanxi province. 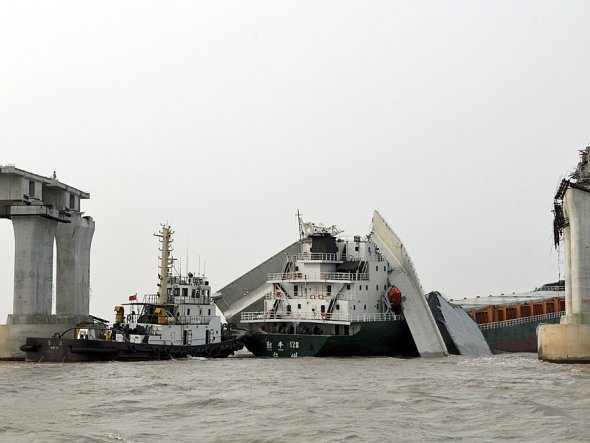 On March 27, 2008, a section of the Jintang Bridge fell onto a cargo ship near Ningbo.

In July of 2011, the Wuyishan Gongguan Bridge in Fujian province collapsed. 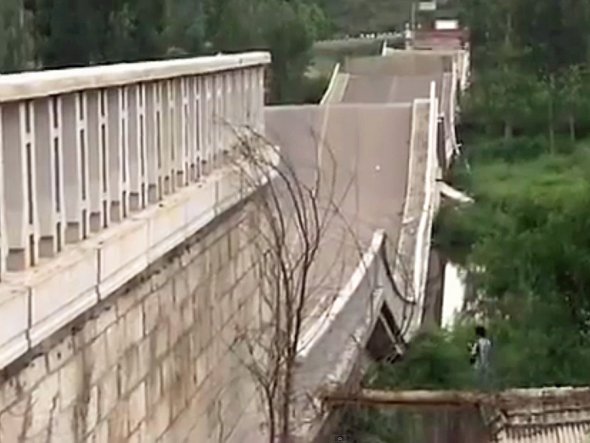 That same month, the Number 3 Qiantang River Bridge collapsed as well as the Baihe Bridge in Beijing.

On August 1, 2011, a bridge collapsed in Zigong, Sichuan Province when a truck ran into one of its concrete supports.

“Tofu bridges,” is what netizens have taken to calling them, and they have become a metaphor for the times in China.

Whether the Tinghe bridge in Houxiang was a tofu bridge nobody can say for certain, but its premature collapse has raised suspicion — especially when this incident was obviously not isolated. 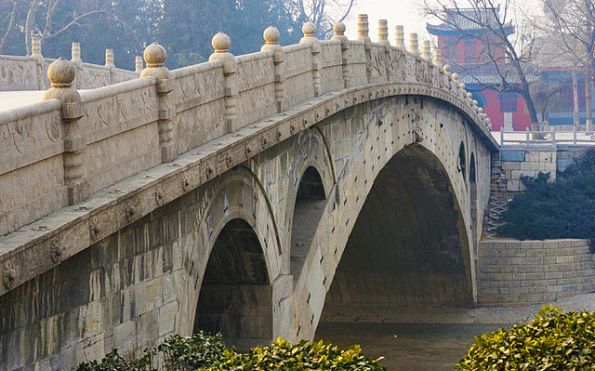 This is the Anji or Zhaozhou bridge in China’s Hubei province. It was built over 1,400 years ago, it has withstood 10 floods, 8 wars, and is still standing and being used today. This bridge is often held as an example of ancient Chinese workmanship and flaunted in contrast against China’s construction projects of today, which often don’t last longer than a few decades.

“We now spend millions to build jerry-rigged bridges unworthy of our ancestors,” commented a Weibo user.

Are we really in a technologically advanced age?

*Some of the photos from the Houxiang bridge collapse were from NetEase, the others were taken by the author. The photos of the other bridges are from the common stock.

« Trekking to Morocco’s Highest Peak
China Selects It’s New Leaders Amid Scandal, Corruption, and the Year of the Dragon »